What is the name of the mineral that can be found before Mithril in Moria?

I remember that in one of the Tolkien books it was explained a little bit how Mithril was obtained in Moria. Before reaching the Mithril veins there was another mineral that caused dwarves to get sick and die.

For the description that mineral reminded me to Uranium or something similar.

So my question is What was the name that Tolkien used for that mineral?

As a bonus, anyone knows in which book this explanation happens?

It sounds like you're referring to the non-canon metal "Celebur" (Uranium), mentioned in the RPG Sourcebook "The Treasures of Middle Earth, Volume II"

Celebur or burning silver is a silvery white or silver-gray metallic material with a strong and very dangerous radiation.

Contact with Pure Celebur might turn out deadly but it is neverthless used in some evil Morgûl-alloys such asKregora and Mithrarian.

Celebur is not forged by any reputable smithies. 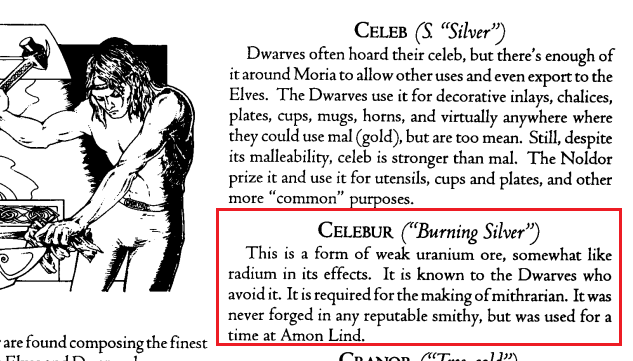 There's absolutely nothing in any of Tolkien's works to suggest such a mineral.

The opening paragraphs of the Tale of Years for the Third Age (Return of the King Appendix B) so include the following statement:

Moria for long remained secure, but its numbers dwindled until many of its vast mansions became dark and empty.

It's possible that whatever source you recall was based on that, but the actual reason for this dwindling is never expanded on by Tolkien.

Looking at the Mithril element, even in the earliest conceptions, and at the point at which the name and idea of Mithril enters the stories (in History of Middle-earth 7), we read:

The dwarves tell no tale, but even as mithril was the foundation of their wealth so also it was their destruction: they delved too greedily and too deep, and disturbed that from which they fled.

This is almost identical to the account in Fellowship of the Ring, with the exception of the words: "Durin's Bane", but despite that it establishes that the connection between Mithril and the abandoning of Moria was that the dwarves had disturbed and fled from something (the early plot outlines in History of Middle-earth 6 indicate even then that a Balrog was in Moria).

This one must be attributed to fan-fiction or other non-canon works.

Not the answer you're looking for? Browse other questions tagged tolkiens-legendarium the-lord-of-the-rings mithril or ask your own question.

78
Why didn't Gimli know Moria had fallen?
19
Where in Middle Earth could mithril be found?
7
Did the dwarves in The Hobbit carry non-magical weapons before they got to The Lonely Mountain?
13
How much Dwarvish appears in Tolkien's work?
89
Why would Shelob own Sauron?
5
How can Tolkien's characters see stars during the daytime?
65
What does Sauron need with mithril?
7
What artefacts are made from Mithril?