Why do some Betelgeuseians have two heads?

In the Hitchhiker's Guide to the Galaxy books, radio plays, TV show and movie, we all know that Zaphod Beeblebrox has two heads: 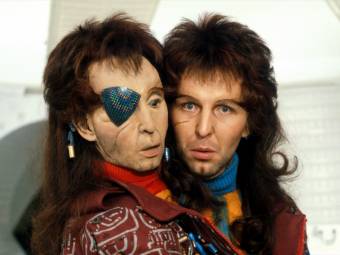 Mark Wing-Davey as Zaphod Beeblebrox in the TV series

Zaphod's Great Grandfather, Zaphod Beeblebrox the Fourth also has two heads, as indicated in The Restaurant at the End of the Universe:

"Now. Who disturbs me at this time?" said the small, bent, gaunt figure standing by the sprays of fern at the far end of the bridge. His two small wispy-haired heads looked so ancient that it seemed they might hold dim memories of the birth of the galaxies themselves. One lolled in sleep, but the other squinted sharply at them.

However, not all Betelgeusians do. For example, his semi-half-cousin Ford Prefect does not.

I know the film implied his second head was an elective surgical procedure required to run for President of the Galaxy but that wouldn't explain why his Great grandfather did, is there any reason given in the novels why some Betelgeusians have two heads, and some have one?

If you take the radio series as the original form of the story, it is clear that Zaphod originally only had one head and two arms.

In episode two, when Arthur and Ford are rescued by the Heart Of Gold, Ford greets Zaphod with "Hi Zaphod, the extra head suits you".
Later, after Trillian asks Zaphod to "take your hand off me, and the other one, and the other one", he replies "I grew that extra hand for you Trillian.".
As @BoBTFish comments, after Ford expresses surprise that Arthur knows Zaphod, Arthur states "He only had the two arms and the one head and called himself Phil".

In the second series, when Zaphod enters the lobby of Megadodo Publications in search of Zarny Whoop, he is challenged by the receptionist: "Who do you think you are - Zaphod Beeblebrox?" and replies "Yeah, count the heads". This suggests that having two heads is not at all common.

Later, when the group holds a seance to contact Zaphod Beeblebrox IV, no mention is made of the extra appendages. Nor is any reference made when one of Zaphod's mothers is mentioned as holding out for the right price for her memoirs.

So the radio series implies that Zaphod Beeblebrox is unusual in having two heads. Subsequent versions of the story in other media may be different. But then, many features of the story were changed in the books.

17
Why is '42' the meaning of life?
17
Why didn't Ford Prefect detect Zaphod Beeblebrox's visit to Earth?
4
Why didn't Marvin reprogram himself to be happy?
70
Why is 'Belgium' the rudest word in Hitchiker's Guide to the Galaxy?
3
Why does everyone in the universe have a feeling that something's going on that nobody would tell them what it is?
3
Why don't the Magratheans make a new world for themselves?
39
Why were aliens allowed to visit Earth?
12
Which head does Zaphod normally talk with?
43
Why did Ford Prefect save Arthur Dent?
9
H2G2: Why three pints?