Why has Korra never turned to Raava for advice or guidance?

Book 3: Change is all about Korra having to deal with issues and conflicts without the help from her past lives. She feels alone, and that there is no one that truly understands her. This is shown, especially in The Ultimatum and A Breath of Fresh Air, where Korra is seen trying to contact Aang for help.

But wait!? She's not alone. She has Raava. Sure, Raava is no past Avatar, but she's been with all of Korra's past lives and arguably knows them better than anyone else. Why is Raava so under-utilised when she's a fundamental aspect of The Avatar?

Korra did turn to Raava for guidance on one occasion

During Episode 10 "Beyond the Wilds" of the final season of The Legend Of Korra (Book 4: Balance), Korra enters the spirit world to free Jinora and a handful of others from the spirit vines, which had imprisoned their spirits within plant-like bubble pods in the spirit world. 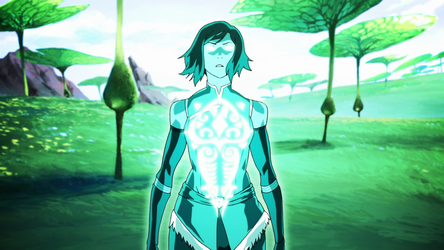 Raava lights up inside Korra, surprising her; telling Raava she missed her, Korra asks where she was, and Raava replies that she was always within her. Korra asks Raava if she can help her find Jinora, and Raava transports her across the Spirit World to the missing tourists; their spirits are held captive within a large, green bubble. With Raava's help, Korra frees them; as she does, their bodies are released from their cocoons in the physical world.

Here is the conversation between Korra and Raava (from the episode transcript):

... Raava lights up inside of Korra.

Korra: Raava, I missed you. Where have you been?

Raava: I have always been inside of you.

Korra: Can you help me find Jinora? [The wind blows Korra to the location of Jinora and Ryu's tour group. They are all trapped inside of a green, spherical force field.] How do I release their spirits?

Raava: You must bend the energy within.

Korra: But I'm powerless in the Spirit World.

Raava: No. You're most powerful here. In the Spirit World, you're connected to all the spiritual energy.

Cut to Jinora and the tour group being released from their vines.

This, as far as I'm aware, is the only time an Avatar (besides Wan) has directly sought guidance from Raava (and even then, it was more like Raava offered guidance, since Korra only thought to talk to Raava because Raava made her presence known to Korra).

Because Raava is not there. No Avatar after Wan has ever communicated with Raava. Her consciousness was apparently lost after the merger between her and Wan, who became the first Avatar capable of bending four elements simultaneously and entering the Avatar State.

10
Why did Korra have difficulty mastering Airbending and not when mastering Firebending?
2
Why hasn’t Katara used Korra to commune with Aang or vice versa?
7
Are all the Avatars essentially the same person?
3
Are there any canon indications that an Avatar's personality is influenced by their previous life?
11
How did Toph know that Korra was the Avatar?
18
Is Korra the last Avatar?
4
How is the Avatar cycle maintained even after Aang severs his connection with Roku?
5
In the Legend of Korra, who does Katara live with? Why doesn't she live together with her children, especially Tenzin and his family?
3
Why didn't Korra take away Zaheer's Bending?