80s horror book with a man crouched and eating a leg on the cover?

The cover of said book may have featured a thin, maniacal looking figure (or boy) crouching in front of a dark forest. He had a leg or something in his mouth, and I vaguely recall there being a red shoe attached to it.

The one story I remember contained a crew of a spaceship set out to find an inhabitable planet. The story might have been written entirely in first person and from the perspective of the ships Captain. Once they land on the planet, the science officers are sent to test out the environment, vegetation, etc... They actually find a cave with a HUGE spider web. I can't recall any other specific details about the planet except that there are an unusual amount of butterflies. Eventually, the crew wind up eating some plants there. This causes their minds to degrade-- as evidenced in the Captain's writing. He goes from being quite eloquent to writing monosyllabically and with big loops. Before his mind goes completely, he mentions that one by one, his crew are turning into butterflies (or maybe that's just implied. I can't recall). The last diary entry is left unfinished.

Additional info from my brother (from a chat):

Ape like creature (just a bestial man) gnawing on the leg bone of a human female, he is appearing to either be squatting in a tree or sitting on a branch, behind him are remnants of peoples things.

Cover was black and the picture was a square within the cover, the items behind him "it" included a lunchbox and a backpack (harkening back to the story that inspired the cover).

Do you remember the one where the guy kills his girlfriend by smothering her while having sex and his old woman land lady watches then comes in at the end and says, "...an old woman gets lonely", hence saying if he wants to stay free he has to lay with her.

Cover is inspired by a story that is told from the guy's perspective about raping a girl when he was younger and as he ages he descends into madness and becomes this sub-human creature haunting his school (in the woods) and devouring the luckless bastards that come too close to his domain.

OP here. The book is Twisted Tales (1987) by Bruce Jones. It was originally in graphic novel form. I finally found it. Thanks for looking! <3 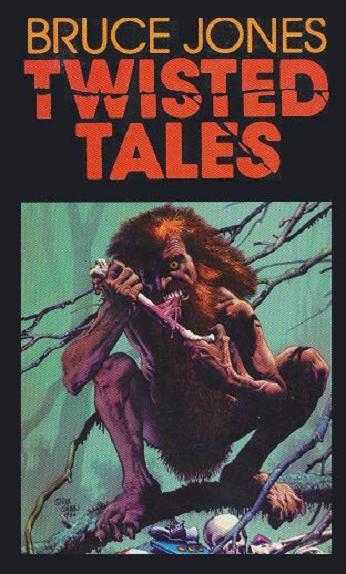 I'm gonna take a stab in the dark, could it be The Year's Best Horror Stories XIII, edited by Karl Edward Wagner. It came out in 1985 and the cover matches your description very nicely. I haven't been able to find a description of the contents online, but this Goodreads review does list the titles. Perhaps one will ring a bell for you. 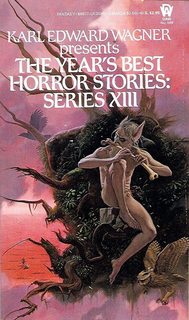 16
Short story about an astronaut who discovers an injured alien
8
Planet of animals that evolve in minutes
7
Trying to identify a short story about hunting an alien tiger on an icy planet
5
70s or 80s novel. Couple abducted from planet, man is killed and woman eventually takes over ship (Adult themes)
15
Which book on a deserted planet with a maze and an insane ancient creature?