80's (or earlier) sci-fi book, space pirates/thieves encounter a spider-like alien with ultrathin legs able to slice through the members of the crew [duplicate]

Ask Question
Asked 6 years, 7 months ago
Active 11 months ago
Viewed 1k times
13
This question already has answers here:
Looking for a story about a giant lost ecological ship, and the quirky guy who became its captain (2 answers)
Closed 4 years ago.

I read this sci-fi book back around 1987 that my father had finished. My memory of the book is sadly very limited, but the emotion of enjoying it string prompting me to try and remember it.

My clear memories are it is set in a spaceship, there is a crew (or team) that might have been space pirates or thieves of some sort. The encounter an alien of some type that I believe was described as spider-like with ultrathin (practically invisible to the human eye) legs that could slice through the members of the crew. 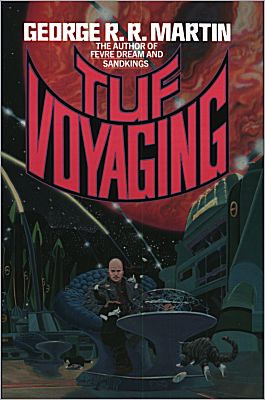 In the first part of the book, a team of archeologists and mercenaries discover the Ark, a huge and powerful ecological war ship dating from a long-past interstellar war. The team falls apart quickly as everyone tries to gain control of the ship for themself. One of the mercenaries gets control of the Ark's biological weapons system (monsters from hundreds of different worlds) and starts using it against the others.

A spi­der, then. A weird one. The rocky ap­pear­ance made him think it was some kind of sil­i­con-based life. He’d heard of that, here and there. It was real god­damned rare. So he had some kind of sil­i­con-spi­der here. Big deal. Kaj Nevis moved closer. Damn, he thought. The web, or what he thought was the web … hell, the damned thing wasn’t sit­ting on the web, it was part of the web. Those fine, thin, shiny web strands grew out of its body, he saw. He could barely make out the join­ings. And there were more than he thought—hun­dreds of them, maybe thousands, most of them too thin to be seen from any kind of dis­tance at all, but when you looked at them from the right angle, you could see the light gleam­ing off them, all sil­very-faint.

And yes, the ultra-thin legs are shown to slice-and-dice very nicely.

16
Looking for a story about a giant lost ecological ship, and the quirky guy who became its captain
9
Which book is set in a giant spaceship that can create life?
6
Sci-Fi Story from C.1990 featuring invisible wires - name of the collection?

3
80s (or earlier) sci-fi book with the smartest young people of Earth sent to outer space, and a council controlling everyone
4
Space movie with alien probe that makes the crew turn homicidal
7
Sci-fi book with colonists, space war, non-sentient dinosaur-like creatures and aliens merging consciousness with captured humans
15
Creepy film with tentacle alien attacking crew members in a vessel in space or underwater
8
70s (or earlier) pulp Sci Fi book with a Conan-type character and enemies shaped like asparagus
9
Book about a female protagonist travelling through space with alien creatures called the Leviathan