What was Captain Britain's reaction to Psylocke's new body?

Was there ever a comic or a storyline that showed their reunion after Betsy Braddock's mind was placed in Kwannon's body?

I think you're looking for "Ghost of Braddock Manor" printed in Excalibur #55 from October 1992. 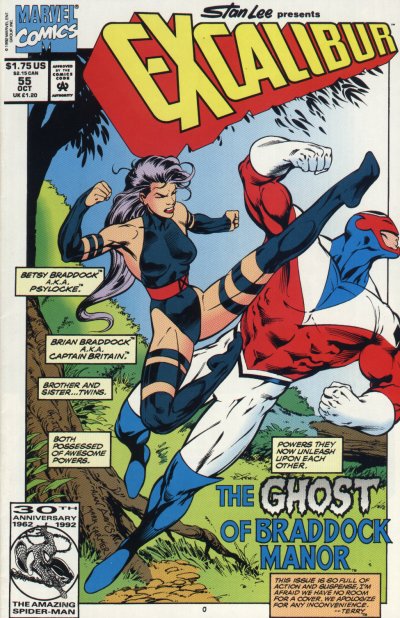 Prior to 1991 the world believed the Uncanny X-Men to be dead, having died on live TV trying to save the world. This included Besty Braddock (AKA Psylocke), in her original body... actually though they were all living in Australia. After being attacked by The Reavers, Psylocke leads the X-Men through the Siege Perilous and is later found in a new body.

The world eventually discovers the X-Men are alive, after the events in Genosha know as X-Tinction Agenda. While the X teams are crossing-over in X-Tinction Agenda Brian Braddock (AKA Captain Britain) & Excalibur were busy with adventures of their own.

Finally in issue 55 of Excalibur we see Betsy visit her brother at Braddock Manor and catch up... though in true comic book hero fashion they barely mention her transformation.

22
Why did hot Adamantium not destroy Wolverine's body while replacing his skeleton?
20
What is the status of the Xavier Institute for Higher Learning's accreditation?
8
What is a good starting point to read about Wolverine and the X-Men?
0
Who are the X-Men in X-Men Regenesis?
8
X-Men: Why didn't Psylocke notice Jubilee's presence in the Australian outback?
7
Does Gambit have a forgotten power of creating illusions?
3
Who attacked Dazzler during All-New X-Men #17?
15
Was Deadpool always aware of the fourth wall?
2
Can Sack suffocate someone by covering them?