There's been a couple of questions lately about different creatures/rocks/trees that are living at a different time-rate than humans, and it got me thinking about a story that I'd read when I was in 6th grade and hoping to find again.

I read the story in English, in the US, in 1980. Here's where it gets tricky... the story was actually on a card, maybe 6" x 8", with a small illustration on each side. It was in a teacher's box with many other cards (different stories) in a classroom. We were assigned to read a story/card once a week or so and there might have been questions about the story on the card itself, or we might have just had to note that we read it. I don't think that all the rest of the stories were necessarily Sci-Fi, just short stories to get the attention of a 6th grader. I do not remember any of the other stories.

The story itself was short, as I said, maybe 2 pages (card sides) long, and illustrated with 1 or 2 drawings of 2 large (maybe 30-50') statues that vaguely resembled Easter Island statues but had arms and legs. One statue was sitting/laying on the ground, and the other was standing nearby. There had been pictures of the statues taken quite a few years previously, and a person was in a small plane taking more pictures now. Comparing the pictures it was noticed that the statues were slightly moved (the standing one's hand had moved closer to what appeared to be a gun on it's hip), and it was determined that they weren't statues but rather creatures who lived at a much slower time rate than humans, and that the standing one was coming to the defense of the fallen one.

Does this sound familiar to anybody?

I don't know the particular story or author, but I can identify the story-cards-in-a-box for you: they were probably from an SRA Reading Laboratory Kit, which have been around since 1957. I used to adore SRA cards & stories. :) I found a link where you can preview some of the cards on PDFs, so you can see if those are the correct format for the cards you are remembering. I'm not sure how you would then search for a certain story/author. Hope this helps a bit!

Per PMar's partial answer (and an earlier, now deleted, answer by user67049 turned into a comment), this could be "Adagio" by Barry M. Longyear as collected in It Came from Schenectady:

"Adagio" feels like a Twilight Zone story written by George R.R. Martin. (Why, yes, I am thinking of Sandkings, though there are a number of classic TZ eps that fit the mould as well.) A ship crashes on an alien world, and the survivors are bored stiff waiting for rescue. One crewman discovers that certain rocks in the area are in fact slow moving creatures. The man uses his speed to convince the creatures that he's a supernatural creature and orders them to engage in bloody wars against each other.

Its Omni publication can be found online here. There is an illustration with Easter Island heads, but it's a joke cartoon and no arms or legs: 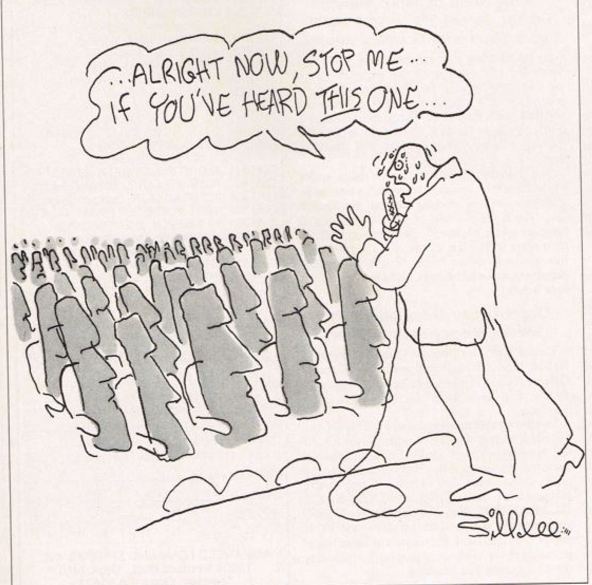 I don't think this is a match, actually, as it's longer (5-6 pages), the aliens look like rocks, not statues, and it's primarily about a holy war. The only statues that appear are at the very end, and they're static ones of the explorers built by the aliens.

20
Futuristic reading devices story from 1970's/1980's
18
Short story where a man owns creatures that build statues of him
12
Short story about creatures living under stone ruins possibly in Western Australia
24
Looking for the name of a short story about an alien who comes to Earth to see statues
11
Short story, possibly from the 1970's, hidden creatures on a mountain
15
Sci-fi short-story collection for young readers - from the early seventies