Was Neelix's cooking good or horrible?

I've been watching/binging on old episodes of Star Trek Voyager. One thing that I can't figure out is whether Neelix's cooking is actually good or terrible. Depending on the episode it looks like some people enjoy his cooking while in other episodes they seem to cringe when brings out food.

Was it either -- or was his cooking simply just very uneven?

Like all great chefs, Neelix is largely under-appreciated by his audience,

TUVOK: The success rate of your culinary experiments has not been high
Flashback

His food is too flavourful because he uses fresh, not replicated ingredients.

WILDMAN: I thought you didn't use replicated vegetables when you're cooking. Always fresh, organic, from the airponic bay.

NEELIX: Well, the yields have been a little low lately. Normally, I would never dream of using synthesised veggies.
Deadlock

Many of the crew aren't used to natural food, having grown up with (bland) replicated food all their lives.

NEELIX: You're welcome. After all, if you want the crew to begin to accept natural food alternatives instead of futher depleting our energy reserves, you need to encourage them by your own choices, don't you?

JANEWAY: Fine. Give me your even-better-than-coffee substitute.

NEELIX: It is zesty, isn't it. I tried following the recipe in the computer's databank but it seemed so bland, so I took the liberty of spicing it up a bit. Call it plomeek soup a la Neelix.

TUVOK: I must point out that if you take the liberty of changing a time-honoured recipe you are hardly presenting a taste of home.
Faces

SEVEN: They are pungent.

SEVEN: My palette is sufficiently broad.

CHAKOTAY: The ship's out of danger, thanks to you. You've earned a break. Why don't you join me in the mess hall. Neelix is going to give a cooking lesson. Talaxian tenderloin in ten minutes.

And after he's gone, some of the crew grudgingly admit that his cooking was excellent

CHAKOTAY: Crewman Chell's asked about taking over in the mess hall full time.

JANEWAY: Neelix left some pretty big pots and pans to fill. Does Mister Chell feel he's up to the challenge? endgame 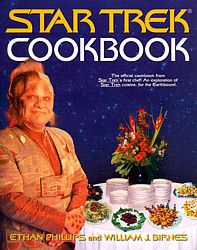 18
Why do people step to positions to be transported, even if there isn't a transporter pad?
23
Has the human race gone vegetarian in Star Trek?
12
Why would the Kazon value water?
21
Which ship has the most prolific "recurring" role in Star Trek?
17
Where were the advanced species and civilizations of ST:TOS during the war against the Borg?
20
Why did Captain Janeway feel that using the Doctor as an expendable messenger boy was more important than keeping him around to heal the crew?
10
Where is Captain Picard's window located on the NCC-1701-D exterior?
31
Is the EMH AI somehow technologically inferior to Soong androids?
15
Star-Trek-like series, where a man accidentally gets impregnated by an alien species
18
Are there any species in Star Trek whose dietary requirements are different enough, that they couldn't survive on e.g. Human or Vulcan food?