Illustration on the "Earthsea Quartet" cover

What is depicted in the top left illustration on the front cover of the Penguin edition of the Earthsea quartet, see for example here?

Presumably it is something from "A Wizard of Earthsea", as the other three illustrations are easy to identify and are from the next three books. But it appears to show Ged as an adult, and on land rather than at sea. That for example would rule out his conflict with Yevaud, in which it is clearly stated that he insisted on confronting the dragon over the water. Could it be the first appearance of Ged's shadow on Roke Knoll? - I don't think so as my impression is that it should have been a much smaller being, and moreover I don't think Ged would have had a mage's staff at that stage.

A larger version can be seen here from the 1991 Roc Books edition: 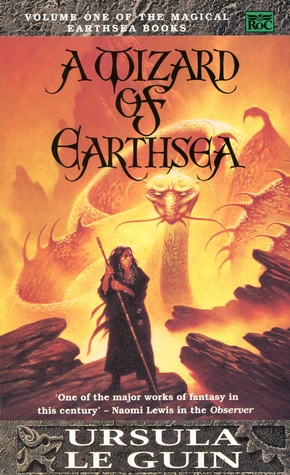 As far as I can tell, the only part of the book that fits the image shown is Ged's confrontation with Yevaud.

Obviously Ged is in a boat in the actual passage (and presumably wouldn't stand with his back to the fire-breathing dragon), but this is easily dismissed as simply being a result of deliberate misreading by the illustrator or the editor:

Many years had the dragon sprawled on the island where golden breastplates and emeralds lay scattered among dust and bricks and bones; he had watched his black lizard-brood play among crumbling houses and try their wings from the cliffs; he had slept long in the sun, unwaked by voice or sail. He had grown old. It was hard now to stir, to face this mage-lad, this frail enemy, at the sight of whose staff Yevaud, the old dragon, winced. â€śYou may choose nine stones from my hoard,â€ť he said at last, his voice hissing and whining in his long jaws. â€śThe best: take your choice. Then go!â€ť

â€śWhere is menâ€™s greed gone? Men loved bright stones in the old days in the Northâ€¦I know what it is you want, wizard. I, too, can offer you safety, for I know what can save you. I know what alone can save you. There is a horror follows you. I will tell you its name.â€ť Gedâ€™s heart leaped in him, and he clutched his staff, standing as still as the dragon stood. He fought a moment with sudden, startling hope.

Not the answer you're looking for? Browse other questions tagged cover-art earthsea ursula-k-le-guin or ask your own question.

28
What is the Speaker for the Dead cover depicting?
16
Does Harry Dresden of the Dresden Files book series wear a hat?

13
What was the name of the Master Namer in the Wizard of Earthsea books and how do you pronounce it?
15
Earthsea â€” Suggested order for Reading/Watching
16
What does Ged mean by this statement in A Wizard of Earthsea?
5
In A Wizard of Earthsea, what does the Master Patterner teach?
8
Why didn't the Nameless Ones try to punish "sinners" other than Arha and Ged?
7
Does Earthsea pass the Bechdel test?
6
Are the shadow creatures in the Court of the Terrenon of the same kind as the ones in the Tombs of Atuan?