Mayor Wilkins' spirit and his role in the creation of Adam

Okay, so I know that Adam was a human-cyborg-demon hybrid created by Maggie Walsh. I know the human part of Adam was an Initiative Member who was killed. The part I'm confused about is the fact that the Adam article on the Buffy wiki states that:

Adam was once a human member of the Initiative who met his end at the hands of a demon corpse possessed by the ghost of Mayor Wilkins; having been one of her favorite agents, Professor Walsh vowed to bring him back to life and placed his body in her 314 Project.

I've watched Buffy up to this point, but I can't seem to find any reference in the show as to where this is mentioned?

Furthermore on the Richard Wilkins article it says:

Wilkins lived on as a ghost for a while, possessing the bodies of dead animals, demons, and vampires. In the process, he was responsible for the creation of Adam, when he possesses the corpse of a powerful demon (his earlier vampire body had been captured by the Initiative) and badly injured the then-human Adam. After a battle with Buffy in the clock tower, where Buffy finally learned of his inhuman nature after she decapitating his current body to no effect. Willow, with the assistance of Xander and Buffy, sent him to the next realm. Faith later told Angel in prison that she recalled the Mayor's ghost visiting her using the body of a dead bird while she was in her coma.

When did this happen?

This is referencing the Buffy comic "Haunted", a non-canon 'trade paperback' which collects various comic stories based on the Buffy television series.

Per the Buffy wikia

Haunted #3
The recently-killed Mayor of Sunnydale plans his strike against Buffy. Wilkins formalizes his plans to hit back at Buffy while she's tormented with dreams. There is also something weird happening beneath the University campus in Sunnydale, something Wilkins will not like.

Haunted #4
Wilkins takes possession of a powerful body and tries to destroy Buffy. He discovers this body in the Initiative labs. Xander leaves while Willow thinks about college life. Buffy must face Wilkins without knowing what or who he is, and must try to figure out Faith's message: "You're already dead." 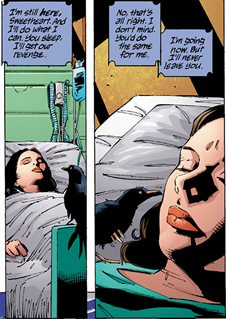 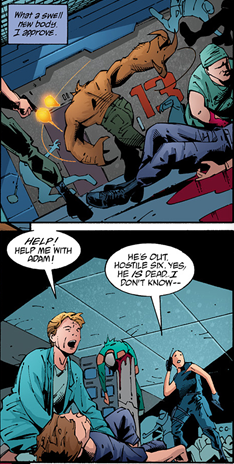 14
Was season one of Buffy originally intended to follow the fake-bad, betrayal, real-big-bad formula?
10
Why do some people remember about the supernatural, and others forget?
8
Spike and Halfrek in Buffy
9
What did Mayor Wilkins do to Mr Trick?
6
What did Mayor Wilkins hope to accomplish through his ascension?
10
Did Mayor Wilkins intend to recruit Faith?
5
Why was Dawn sent to Buffy and not the “current” slayer?