What did Zion think would happen to the blue pills if they succeeded in destroying the Matrix?

Part of the Prophecy of The One involved the destruction of the Matrix. The prophecy as explained by Morpheus is:

When the Matrix was first built, there was a man born inside who had the ability to change whatever he wanted, to remake the Matrix as he saw fit. It was he who freed the first of us, taught us the truth - As long as the Matrix exists, the human race will never be free. After he died, the Oracle prophesied his return and his coming would hail the destruction of the Matrix, end the war, bring freedom to our people. That is why there are those who have spent our entire lives searching the Matrix looking for him.

And if that's true then who really has the moral high ground -- Zion or the Machines? At worst the Machines are guilty of "enslaving" the blue pills, but even then we are told the blue pills make an unconscious choice to accept the Matrix. On the other hand, Zion would be guilty of murdering billions.

In The Matrix Online Morpheus admits that he (and presumably the rest of Zion) thought that a human victory would result in the deaths of the blue pills in their pods. The relevant quote is:

The video of Morpheus saying this is on Youtube. In case the video is no longer available, here is a screenshot with the quote from Morpheus as a subtitle: 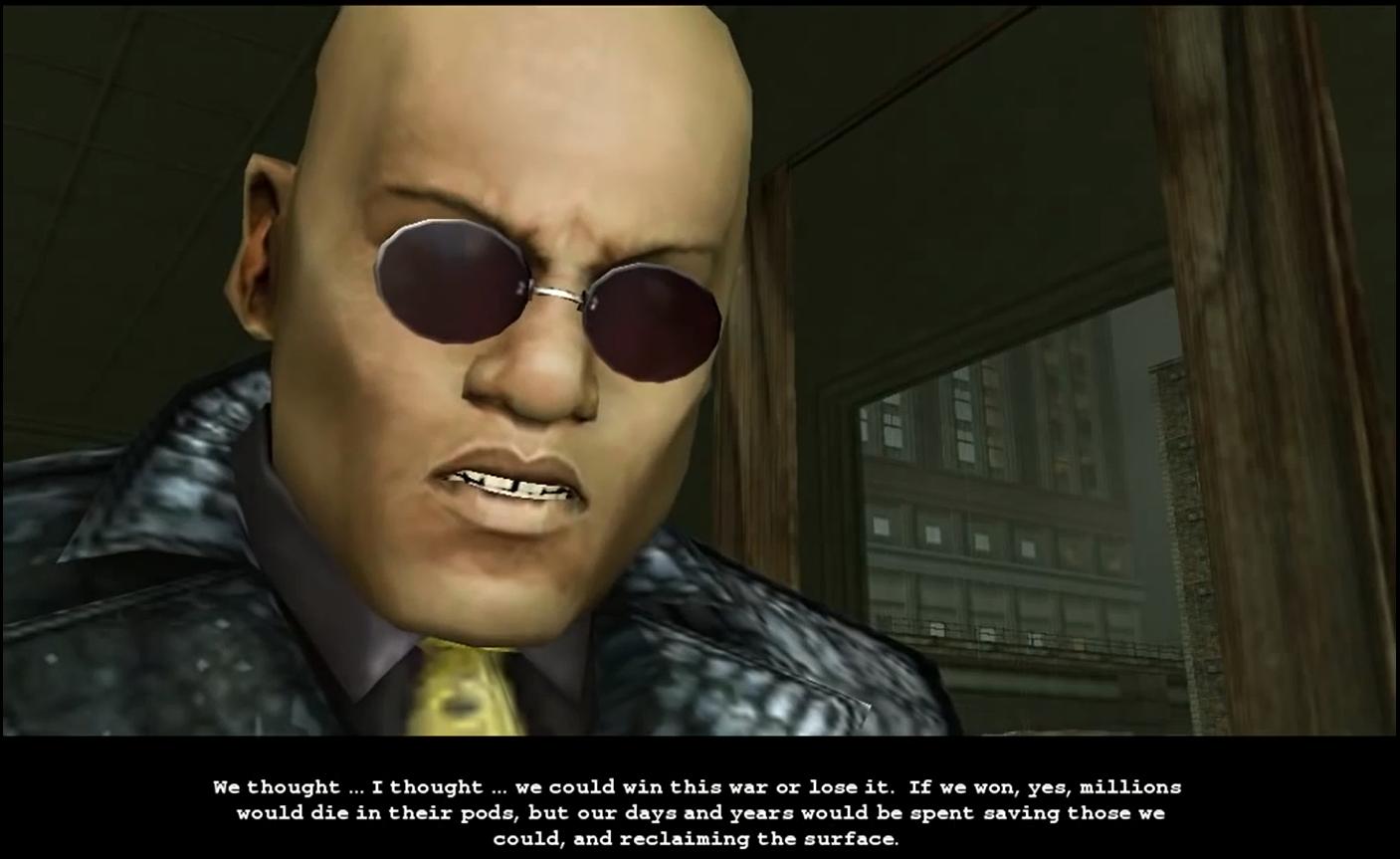 What this implies about the moral purity (or lack thereof) of Zion and its operatives is left as an exercise to the reader...

First off, as you noted, considering that the whole search for The One was a quest designed by the Oracle and the Architect to retain stability in the Matrix, it is more likely than not that this parable, as told by Morpheus to Neo, also originated from the Oracle.

And the "You're not The One, Neo" Oracle is known for Obi-Wan-Kenobying the truth.

As far as the point of view of those who believed the prophecy:

63
What flaw in the Matrix was Neo supposed to correct?
65
Was Agent Smith created by the Oracle and if so, with what purpose?
21
Did the Wachowskis intend for the humans to be the villains of The Matrix?
12
Could genocide have ended the rule of machines?
7
Do redpills have any feelings of remorse for killing innocent bluepills during their Matrix operations?
6
Why are the 'good guys' so willing to kill other humans?

25
Why Did Neo Think His Powers Would Work Outside the Matrix?
46
How do people in the Matrix develop a residual self image that resembles their own body?
20
Did Agent Smith have the power to fulfill Cypher's wish?
21
Did the Wachowskis intend for the humans to be the villains of The Matrix?
10
How can they hack the Matrix, wirelessly?
6
How to detect "blue pills"
6
Were the machines actually using humans as batteries, or was that all a lie?