Who's faster? Quicksilver or Flash?

We see a lot of information about both of them, but is there a specific speed that each one can reach? I'm trying to figure out the current speed of each one, in the current comics line.

In terms of pure speed, in their respective universes, the Flash (Barry Allen) is faster, by far, than Quicksilver.

When Marvel and DC have had crossovers between Universes, Quicksilver's powers remained constant due to their mutant origins (which presupposes his body has been organically adapted for the use of superhuman speed) while the Flash's speed is an aspect of an external power which he may not have access to in the Marvel Universe.

UPDATE: To answer a question regarding both of these speedster's thinking capacities:

Depends on the universe. In DC, Flash can beat the speed of light while Quicksilver tops out at Mach 4. However, in the crossover events, we've learned that Flash cannot access the speed force in the Marvel universe and cannot go faster than Mach 1 while Quicksilver has the same speed in either universe. Source

The below image is a common image macro / meme used to address Flash's reaction time and speed. It is taken from the post-Crisis pre-New52 era Superman story arc "Grounded" (part 7, Superman Vol. 1 No. 709) wherein Superman walks across America reflecting on his relation to it and, at one point, asks Flash (Barry Allen) about what he sees. 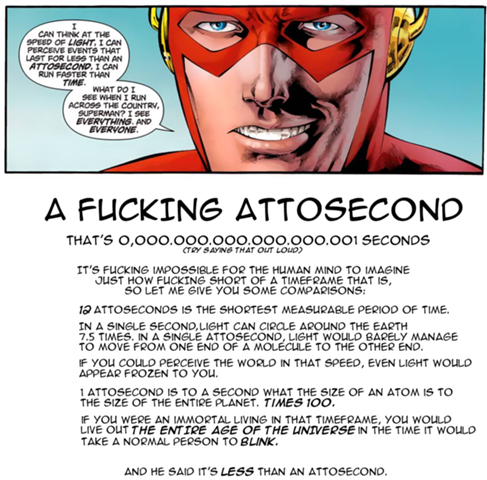 There is no explicit proof that such continuity is preserved in the current line except for Grant Morrison's Multiversity project and his position that: “People have this idea of canon, but there is no canon,” he says. “To me, it’s all real. Every comic you ever read is real.” Arguably a philosophical position, but distinguishable as he is an architect of the DCU with the ability to actively shape its continuity.

Nonetheless, it is instructive in the creator's perception as to the magnitude of Flash's speed as conceived of by J. Michael Straczynski, written by Chris Roberson, and vetted by Eddie Berganza. Such sentiments have carried into the New 52 with feats such as these: 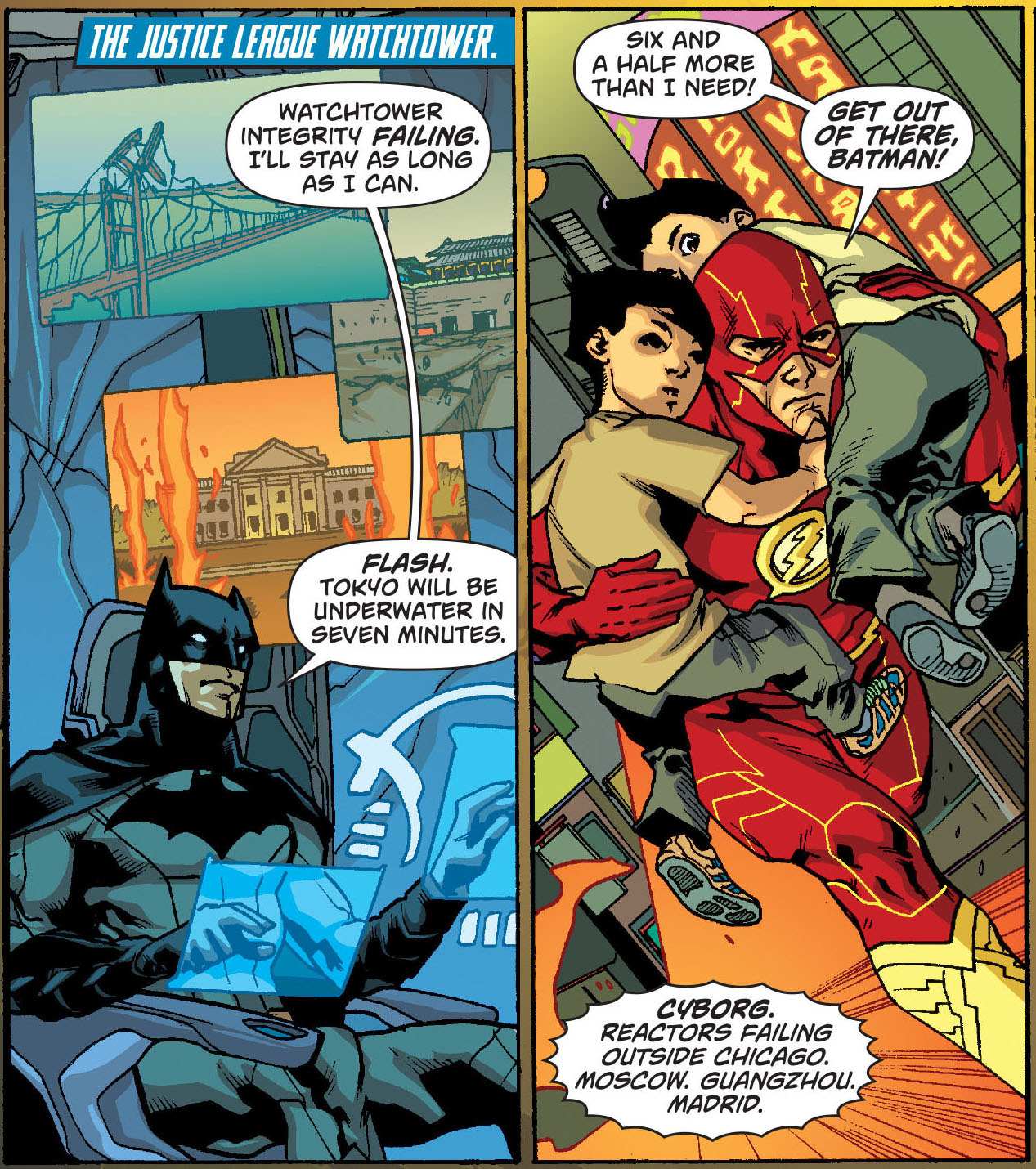 By comparison, Quicksilver is generally perceived as a super-sonic, rather tha super-luminal, speedster. The most notable exception is when exposed to the Terrigen Mists which enabled him to time travel and create temporal duplicates of himself. However, the ability took a severe toll on him and such abilities are commonplace to the Flash family.

Impluse (Bart Allen) similarly had temporal duplicates and several iterations of the Flash and members of the Flash family can time travel. Thus, Flash is consistently portrayed as faster by an order of several magnitudes.

Which flash are we talking about?

The Barry Allen flash is technically the fastest thing in both universes[1].

In terms of his max speed, he can "run faster than the speed of thought"[2](which is a really weird way of saying hes infinitely fast).

Flash (BARRY ALLAN) In Flash #150, "straining every muscle," he ran at ten times the speed of light. And lets see this pic - Death of THE FLASH 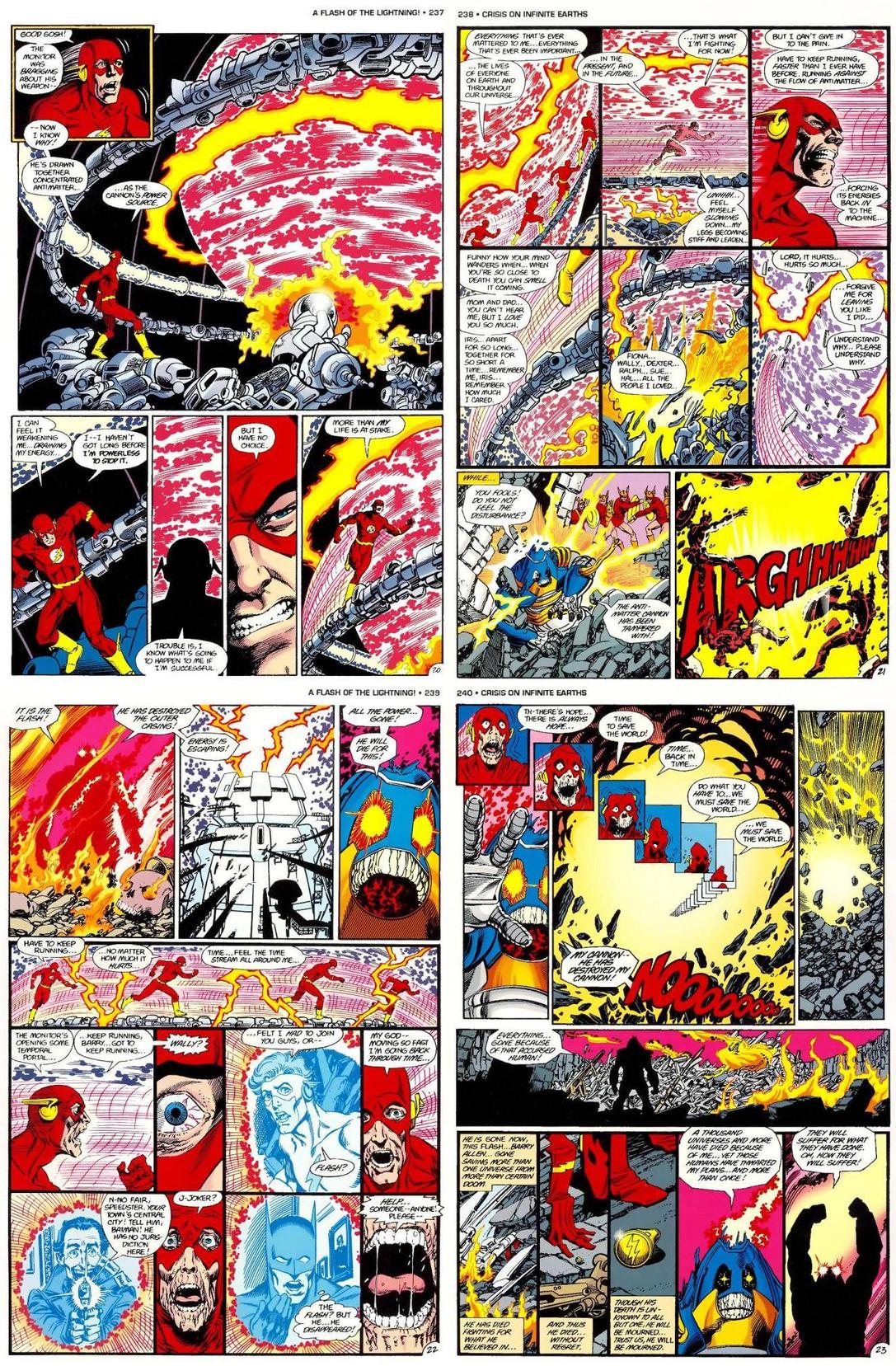 HE IS THE FASTEST THING IN ALL UNIVERSES

To me[Personally] on the comics[and episode 6] The flash made a sonic boom punch[Cisco was fascinated] and the only way to do that is to run faster than the speed of sound and if I am wrong,they say "The Flash" is the fastest man alive,so I would have to say by a landslide,"The Flash" is Faster than "Quicksilver".Of course, the Dc Universe and Marvel Comics Have never collided to make the ultimate race between "The Flash" and Quicksilver so this is just my opinion.

P.s[The Flash Has not reached his full potential yet so I think Flash would win]

Not the answer you're looking for? Browse other questions tagged marvel dc the-flash quicksilver or ask your own question.

22
What is Barry Allen's aka The Flash's top speed?
20
Can the Flash see the future now?
10
Can The Flash think faster?

27
Can the Flash run faster than light?
10
Can The Flash think faster?
12
Is Green Lantern faster than Flash and Superman?
2
How does The Flash move without being seen?
6
Superman/Flash Time Travel
14
Does the Flash have use for a computer/programming and if so how does he deal with their slowness?
1
How much time does the Flash need to reach lightspeed?