How does a broomstick determine which rider is in control?

In Harry Potter, how does the broomstick know who to listen to when there is more than one person on it?

Is it the person in the front? The person using hands holding it? The first person to get on? Or is it its owner?

If not, can two people control a broomstick at the same time?

AFAIK, this is never covered in ANY material (books, Pottermore, or interviews).

The only case of dual broomstick flying I can recall is the battle of Seven Potters, where such a concern wasn't discussed at all (and even that isn't clear whether it was dual. The book leaves this somewhat unclear, while the movie shows them riding separately). The closest and only evidence for tandem riding I saw was this quote:

And then a broom materialized directly above them and streaked toward the ground –
“It’s them!” screamed Hermione.
Tonks landed in a long skid that sent earth and pebbles everywhere.
“Ron was great,” said Tonks warmly, relinquishing her hold on Lupin. “Wonderful. Stunned one of the Death Eaters, straight to the head, and when you’re aiming at a moving target from a flying broom –”

Even that isn't certain, since they did a stop-over at Aunt Muriel's before coming to the Burrow.

However, as a random informed speculation - we know that a Wizard and his Wand form a sort of a bond.

It would be conceivable - although unprovable from canon - that a wizard and their broomstick may also form a bond. If (big if) that is the case, then presumably the true owner of a broomstick would be listened to over the guest rider.

I would say the person in front or the first person to get on. I can't recall this being specifically mentioned anywhere canon, but the person in front makes sense, as TenthJustice commented, that it is like motorcycles. The best example I could find was in Deathly Hallows, chapter 31, in the fire in the Room of Requirement:

Harry seized a pair of heavy-looking broomsticks from the nearest pile of junk and threw one to Ron, who pulled Hermione onto it behind him. Harry swung his leg over the second broom and, with hard kicks to the ground they soared up into the air...

[Ron] and Hermione dragged Goyle onto their broom and rose, rolling and pitching, into the air once more as Malfoy clambered up behind Harry.

Harry is steering the broom, and Malfoy clearly has no control over it:

Note: I do not have a copy of the book on me, so the quotes are from a Google Book that seems to be accurate.

From the instances of multiple riders that we see, the back rider holds on to the front rider, which presumably means that the front rider is steering. From Chapter Four of Deathly Hallows:

Everyone mounted their brooms.

"Hold tight now, Ron," said Tonks, and Harry saw Ron throw a furtive, guilty look at Lupin before placing his hands on either side of her waist.

From Chapter Thirty-One of Deathly Hallows:

Harry swerved again as the serpent lunged at him; he soared upward and straight toward the place where, he prayed, the door stood open: Ron, Hermione, and Goyle had vanished; Malfoy was screaming and holding Harry so tightly it hurt.

Since it has no visible controls, whatever they are appear to be equally accessible to anyone on it. In that case, one would imagine it works a bit like a bobsled/toboggan. In those, steering is done by leaning (but the same principle should apply if were instead some kind of minor mental effort). When multiple people ride, either one person does the steering (and the others let them), or they all work together. If they instead work at cross purposes (or work together inexpertly), bad things can happen. 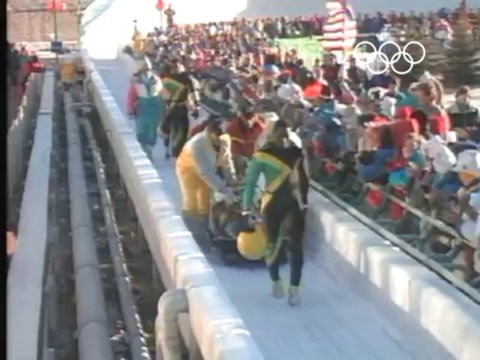 Not the answer you're looking for? Browse other questions tagged harry-potter flying-brooms or ask your own question.

0
Could two people fly on one broomstick?

9
Would the Elder Wand choose every new owner who wins?
18
Why did Voldemort attempt Avada Kedavra at Harry a second time in Deathly Hallows?
3
How does a wand that has been won behave towards its original master afterwards?
13
How does a wizard become powerful in the Harry Potter universe?
19
What Hogwarts classes are taught to two houses at once?
20
How does Voldemort know who is summoning him through the Dark Mark?
65
How does one ride a broom in Harry Potter films?
12
How does a centaur know what is hidden in Hogwarts?
14
In what way is the Elder Wand more powerful than a regular wand?