Can Deadpool be killed?

Thanos cursed Deadpool to not die anymore. He already had his head decapitated, but after his head was put back in place, he returned to life. Has anyone read anything about it? I mean, how to finish, definitely, the life of Deadpool.

No. If Thanos wills it , it cannot be undone.

It's true that Deadpool's regenerative power comes from Wolverine, and Wolverine can be killed.

However, Thanos is an Eternal and even without the Infinity Gauntlet his power is quite extensive. Of most importance is Thanos's ability to travel through time and manipulate matter.

If Deadpool were close to death, Thanos could easily prevent this on an atomic scale, and if he were somehow to die, Thanos could travel through time and prevent the death from taking place. And even if this were impossible, his personal relationship with Death herself may mean she might not reap Deadpool.

Marvel have just announced "The Death of Deadpool". If anyone can kill off Deadpool it's marvel

Marvel Comics has announced, via Nerdist, that they will be killing Deadpool in April's Deadpool #250, which will be the final issue of his ongoing series.

“In all honesty, the story that you’re going to get in Deadpool #250, is a story that we really have been building to since the first issue of Deadpool NOW,” says Gerry Duggan, who has co-written the series with Brian Posehn since its most recent relaunch. “And it will absolutely feel – it will feel, I hope, readers will think that this is an appropriate end for this Deadpool.” 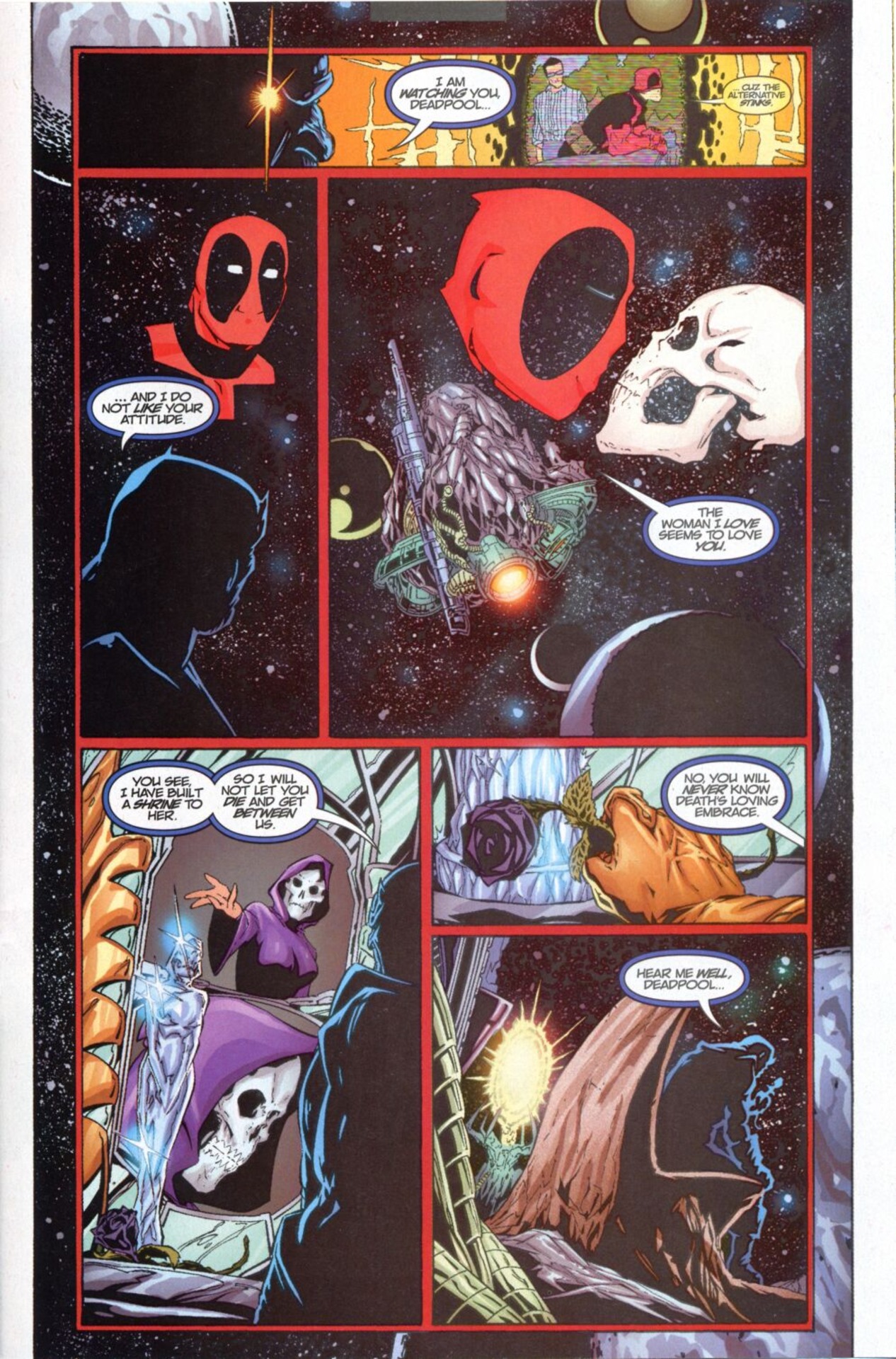 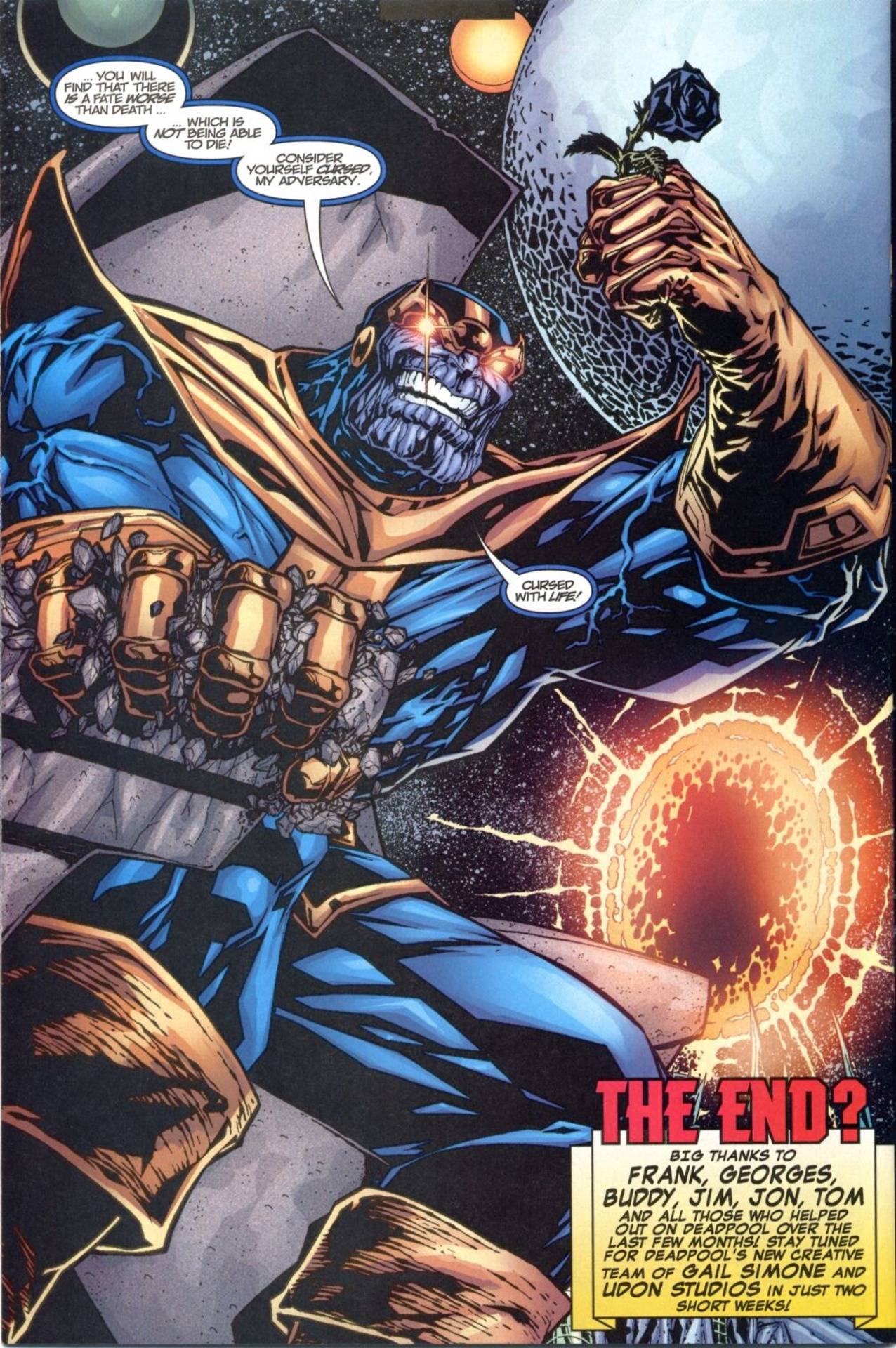 Well recently theres a few series of comics that delt with this. The first was the Deadpool series that recently ended and now we have the new one. Where deadpool loses his healing factor for a time and he seems rather killable but you find out it was just vastly slowed down. Theres also Deadpool vs the Marvel universe series, where he has Daken and X-23 tied up with flamethrowers pointed at them that light them up everytime they start to regen, which is how at the time he says he'd deal with his own healing factor. Finally in Deadpool vs Deadpool its deadpools killing each other with weapons designed to kill other Deadpools, for example theres a energy gun that can kill a deadpool without him regenerating. Deadpool also exploits his teleporter to kill another by sending half his body somewhere else. So yes deadpool can die or basically be considered dead, but he'd probably never be truly dead without having that curse removed.

I think it would be possible, since his healing factor is similar to Wolverine's and Wolverine can be killed.

From Deadpool's article on marvel.com, under Powers, we know that

Deadpool possesses a superhuman healing factor derived from that of the mutant Wolverine that allows him to regenerate damaged or destroyed areas of his cellular structure at a rate far greater than that of an ordinary human. As such, he can regrow severed limbs or vital organs. The speed at which this healing factor works varies in direct proportion to the severity of the damage Deadpool suffers. This healing factor also affords Deadpool a virtual immunity to poisons and most drugs, as well as an enhanced resistance to diseases and an extended life span. Unlike Wolverine’s natural healing factor, Deadpool’s is mentally driven to a partial extent.

So, since his ability is similar to Wolverine's, I think we can assume that he can be killed, but it would be really really hard.

Deadpool is immortal. the only way to kill him would be through thanos removing the curse, then striking his healing factor with carbonadium OR complete atomization. Although, marvel revealed they will be killing him. This still may not be true, as knowing that he can break the fourth wall, they could make a joke ending where he lives.

In the Deadpool classics TPB, in the first or second book of it there is an issue where Deadpool looses the ability to regenerate for some reason that I cant remember, and he gets the scientist that experimented on him in to get him the powers in the first place to do more work on him, and he does fix the regenerative powers for the most part, but it is explained that if Deadpool gets a major major injury, such as looses a limb, then the limb stays off, it cant regrow or reattach itself.

Deadpool's immortality doesn't originate from his healing factor. Thanos placed a curse on him, so that he would never die, because of the love triangle between Thanos, Deadpool, and Death.

Anyway, imagine Deadpool having The Flash's abilities along with his own... Better healing factor than Wolverine Immortal due to Thanos (Once mastered, he would be faster than the speed of light--like 100x faster than superman, be able to time travel, go into different dimensions, do infinite mass punches, run on water obv. and so on.)
With his weapons and style of fighting, this would be a wicked upgrade.

No. He's been cursed by Thanos and also has the regenerative powers enhanced

Not the answer you're looking for? Browse other questions tagged marvel deadpool thanos or ask your own question.

67
How to kill Wolverine?
6
Why doesn't Wolverine's healing factor work any more?
9
What happens if Deadpool can no longer access food?

5
Does Bruce Banner/The Hulk suffer from dissociative personality disorder?
19
Does Deadpool feel pain?
42
If you cut Deadpool exactly in half, which half would regenerate?
1
Has Deadpool survived being killed by burning?
9
Have Deadpool and Bea Arthur ever met?
7
How can Thor be worthy?
4
Did Thanos survive the Titan battle because he is a very powerful being?
0
What are Thanos's motivations for destroying the Infinity Stones?