Why Does Gandalf Think Rohan Should "Stand and Fight"?

In the Two Towers film adaptation (it has been about a decade since I read the book, so if there are differences, I'd like to know about them), Gandalf derisively sneers:

They flee to the mountains when they should stand and fight!

This refers to Théoden running away to Helm's Deep instead of staying and fighting the army of Saruman.

Pardon me, but that sounds like a great idea.

In the movie, we see Théoden's town, Edoras: 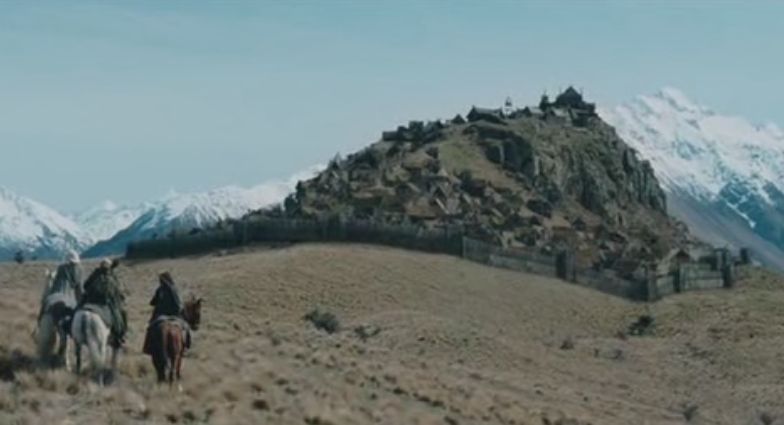 It's essentially a bunch of thatch-roof houses, surrounded by a wooden fence. It's exposed on all sides. Everything in sight is flammable--and each gate is probably about the structural equivalent of a barn door keeping the hand of Isengard at bay. Contrast this with Helm's Deep: 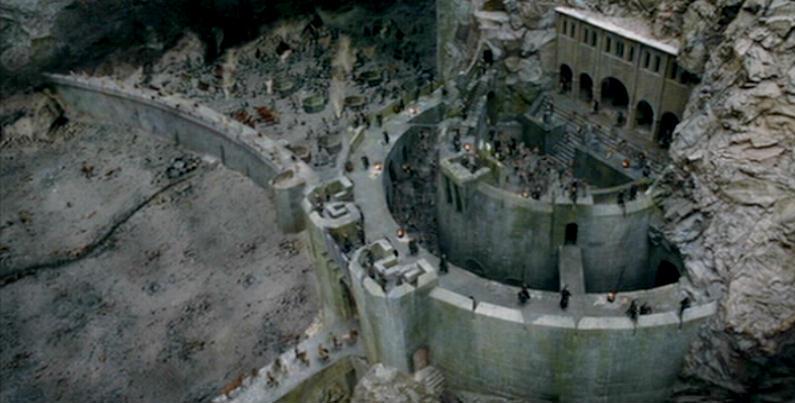 Not only this, we see that Helm's Deep works amazingly well in practice. It took an entire army loaded with state-of-the-art weaponry, including bombs, siege ladders, and genetically engineered orcs as soldiers on the order of twelve hours to break through the defenders, which comprised mostly untrained women, children, old men, and a last-minute platoon of elves, all outnumbered probably 100 to 1.

Note also that during that time, Gandalf managed to summon the riders of Rohan, which were the people in Rohan that actually, you know, could fight. The siege of Helm's Deep bought the good guys valuable time.

Under the circumstances, I'd say it's ludicrous to consider going anywhere but Helm's Deep. Why did Gandalf think otherwise?

That's just another example of Peter Jackson getting it wrong. In the book, leaving Edoras is Gandalf's idea:

‘Now indeed there is hope of victory!’ said Éomer.

‘Hope, yes,’ said Gandalf. ‘But Isengard is strong. And other perils draw ever nearer. Do not delay, Théoden, when we are gone. Lead your people swiftly to the Hold of Dunharrow in the hills!’

‘Nay, Gandalf!’ said the king. ‘You do not know your own skill in healing. It shall not be so. I myself will go to war, to fall in the front of the battle, if it must be. Thus shall I sleep better.’

(Book III Chapter 6: The King Of The Golden Hall)

And later, changing the plan to go to Helm's Deep is also his idea:

‘Ride, Théoden!’ he said. ‘Ride to Helm’s Deep! Go not to the Fords of Isen, and do not tarry in the plain! I must leave you for a while. Shadowfax must bear me now on a swift errand.’ Turning to Aragorn and Éomer and the men of the king’s household, he cried: ‘Keep well the Lord of the Mark, till I return. Await me at Helm’s Gate! Farewell!’

Neither Gandalf nor Theoden wanted to fight at Edoras, in the books or movies. It is obviously indefensible. The evacuation of Edoras to Helm's Deep in response to invasion of the noncombatants is a done deal, as that is the only shelter.

What Gandalf really wanted was for Theoden to call Rohan to mobilize all its forces, so that they could eventually go on to Minas Tirith against Sauron. Theoden wasn't into that, and put his guards and himself into Helm's Deep rather than call on his subordinates for reinforcements. When Saruman's army turned out to be so huge that the fall of the Hornburg was probable, Theoden realized his mistake.

Luckily, Gandalf had gone out on his own and called up reinforcements without authority from the king. In the books, they were led by Erkenbrand, in the movie, Eomer. They drove off the orcs and salvaged the battle, which was turned into a war-winning move when the Huorns unexpectedly arrived in the rear and destroyed the Orc and Uruk-Hai contingent.

This removed the threat of Saruman, but now time was running low as Sauron was on the move and Rohan still had not collected their army together. This took some days more, and Gandalf had to ride ahead to stiffen the resistance of Minas Tirith. And (in the books) the delay was nearly fatal, as Rohan was blocked from the city and only the intervention of Ghan-buri-Ghan allowed them to bypass the roadblock. Even in the movies, you can see that it was a close run thing, as the city nearly fell. How much better would it have been to have the Riders waiting to attack the armies of Sauron crossing the river?

If Theoden had called the muster, all or some part of the Rohan forces might have been available at the Hornburg battle or Minas Tirith battle, and thus these might not have been such a close-run thing. Events and the author conspired differently.

The books and the movies differ somewhat. This answer is based my understanding of medieval military strategy and what is seen in the movie.

Helm's Deep is a great fortress for defending against an assault, but against a siege it is actually pretty poor.

A besieging army can easily block all paths leading to the castle, making it impossible for the besieged to bring in new supplies or try to escape when they run out of supplies.

Furthermore there is relatively little space in the caves, diseases could become a serious issue.

Saruman was too impatient, he could pretty much have waited the enemy to death. He would of course still have to deal with the army Gandalf brings, but it should be possible to take that encounter elsewhere and thus avoid fighting against the two enemy armies at the same time.

All that said, it doesn't seem that Théoden had any great alternatives.

It can be understood differently than a misunderstanding in military tactics by Gandalf or Peter Jackson altering the book.

I always thought what Gandalf wanted to say was: Grima Wormtongue should not have been let to divert Rohan from its watch, and so in normal circumstances, Eomer and his horsemen should have been there to fight the troops of Isengard in a real battle, not a siege, which is kind of a last hope.

the helm's deep scene was hardly peter jackson's finest hour as an interpreter of tolkien (my biggest issue being that there was not a company of elves fighting there in the book, and the huorns were totally left out - they're the ones who actually decided the battle).

as far as standing and fighting, cirdan gave Narya, the Ring of Fire, to gandalf upon his arrival, in hopes that it would kindle a fire in mens' spirits

28
How could Treebeard call for war without an Entmoot?

17
How did Saruman's army reach Helm's Deep so quickly?
22
How large were Saruman's and Sauron's armies?
19
Why did Saruman attack Helms Deep instead of capturing Edoras?
22
Tolkien's history of Elves singing and Ents walking and talking
32
Why does Gandalf act in this way in the Houses of Healing?
46
Was it reckless to allow Wormtongue to go free?
22
What are the advantages of breeding Uruk-hai for Saruman?
66
Why do the Rohirrim apparently find the H-word offensive?
40
Why was the breaking of the wall of Helm's Deep so important in "The Two Towers" movie?
21
Does Saruman invade Rohan to please Sauron, or is it a desperate last-ditch attempt to recover the ring?