What is the relationship between Yondu and Starlord?

In the movie, Guardians of the Galaxy, Starlord is abducted from Earth just after his mother dies. Over the course of the movie, Yondu makes several statements that

would give the impression that Yondu is his father.

Yondu repeating phrases that Starlord's mother used of his father and Yondu laughing at the end of the movie, when he finds out that his son has tricked him out of the booty, despite threatening to kill him.

Yondu also has a side conversation with one of his crew, in which he says something to the effect of "Aren't you glad we didn't deliver him to his father?" This last conversation could go one of two ways. It could be genuine or it could simply be the lie that he told his crew in order to get them to help save his boy. Recently, a friend of mine was arguing that in fact Yondu was Starlord's guardian, not his father, and used that last conversation as proof.

Is there anything in this comics that explicitly defines the relationship between Yondu and Starlord?

First, it should be noted that the comics can’t be taken as definitive evidence of how things will play out in the MCU, because director James Gunn has confirmed one fairly important piece of information about Star Lord’s parentage that diverges from the comics:

The most important thing Gunn said seemed to be this:

“It’s definitely not the character who it is in the comics, I’ll say that much.”

If he’s willing to change that, then he may also change other things, such as Yondu’s relationship with Quill.

At a session in Bangkok, he made more comments about when Starlord’s Father might appear in the MCU, which makes it sound to me like he hasn’t appeared yet:

He also was asked to clarify if Star-Lord’s father would be in Guardians Of The Galaxy 2? Gunn replied,

“He’ll… be showing up pretty soon”.

From the first piece, we do learn that a lot of thought has been given to Yondu’s relationship with Quill, but it sounds distinctly like a guardian-like relationship, not a parental one:

There have been a lot of documents passed around about who Peter Quill’s father is, and things like that, between a select two or three of us. That’s been part of the plan since the beginning, that’s something I had to work out and I worked it out before we shot the screenplay. We wanted to make sure Yondu’s place in everything made sense and it does, so it’s all very specific stuff.

Personally, I don’t recall any comments that would suggest Yondu is Quill’s father. For me, it seemed consistent with what we saw: Yondu picked up Quill from Earth when he was still very young, and acted as his guardian until he was old enough to work on his own.

I think that’s it: Yondu is Quill’s guardian, not his father.

Now, is there a reason he picked up Quill? What’s his relationship with Quill’s father? That has yet to be established, but given the [fact revealed in the first spoiler block], I don’t know how much we can really infer from the comics.

Like alexwlchan already said in his answer, the cinematic universe can be very different from the comic book universes.

There certainly is a large difference in this case, because in the comic books Star-Lord and Yondu share no relation at all.
They are actually from two different continuities. Star-Lord hailing from Earth-616 (Mainstream Universe) and Yondu from Earth-691 (War of the Worlds Universe). The only thing they have in common is that they are both Guardians of the Galaxy.

So to answer your question, no there is nothing in the comics about their relationship.

In the Cinematic Universe (Earth-199999) Yondu leads the Ravagers. He basically kidnapped the young Peter from Earth after his mother's death and then decided to keep him and raise him to become a Ravager. So Yondu is basically Star-Lords adoptive father and Peter himself states in the movie, that Yondu is the closest thing to family he has.

They share no blood relation however, which is emphasized later in the movie when Nova Prime says that Star-Lord is half Human and the other half is from an unknown race.

In the Marvel Cinematic Universe, Yondu Udonta is a scavenger/pirate who is paid to acquire high value items for the right people. Peter Quill's abduction was just another asset Yondu was paid to acquire and return. He did not bring Peter Quill to his father and his reasons remain his own. 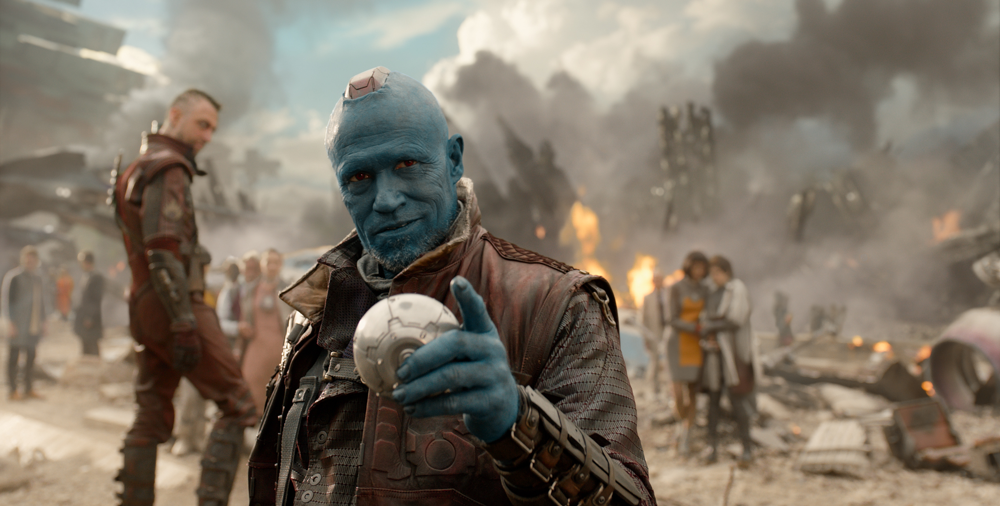 Yondu is a hard man in a hard universe. He does not appear to have any family besides his Ravengers and his ersatz son, Peter Quill. He smiles at the end after discovering the troll doll because he realizes he taught Quill well. Maybe too well.

UPDATE: In Guardians of the Galaxy Vol 2, it is revealed that Ego is Quill's father and that Yondu did not return him to Ego because he suspected none of Ego's other children had fared too well. Having grown fond of Peter, he simply made him a Ravager instead.

In an interview with Empire, Gunn reveals that Peter Quill's lineage in Guardians Of The Galaxy 2 will deviate heavily from the source material.

There have been a lot of documents passed around about who Peter Quill’s father is between a select two or three of us. That’s been part of the plan since the beginning, that’s something I had to work out before we shot the screenplay. We wanted to make sure Yondu’s place in everything made sense and it does, so it’s all very specific stuff. It’s definitely not the character who it is in the comics, I’ll say that much.

He also says that Quill's father might not even appear in the second film if he doesn't serve the core story that's still in development, and surely Rooker's Yondu will return.

So, basically, it is still on hold but Yondu is on the list of the "maybies"

Peter's mother said "he was an angel made out of pure light" and Yondu said " I may be pretty as an angel but I'm not one " I think it's a hint by Gunn. The smile at the end seems one of an indulgent father.

3
When did the events between issues 7 & 8 of Guardians of the Galaxy vol.3 occur?
14
Where did Star-Lord get the troll doll?
37
What is the weapon that Yondu wields in Guardians of the Galaxy?
5
Where does Yondu of the Ravagers come from?
15
In Guardians of the Galaxy, if Yondu can’t whistle, can he still use his weapon?
12
What caused the conflict between the Kree and the Xandarians?
17
What code did Yondu break?
12
Is there music in space?
6
Why did Yondu not deliver Peter?
14
Did anyone else transport Ego's children?