This was a movie I watched nearly fifteen years ago.

The climax of the movie is that this guy, now super intelligent, tries to merge with the cyber space. He keeps on trying different portals to find the right one. The scientist who made him smart tries to reason with him but he ignores him and banishes him from the cyber world. The scientist as a last resort sets up dynamites inside the lab to stop him but just as the bombs go off, he gets access into the cyberspace.

He states his first crime or act as a cybernetic being would be to call all the telephones in the world.

Just as the film is about to end and the scientist hugs his family, the telephone rings.

To confirm your final point: it ends with (spoilers)

all the telephones in the world ringing, to show that The Lawnmower Man is still alive, in cyberspace. 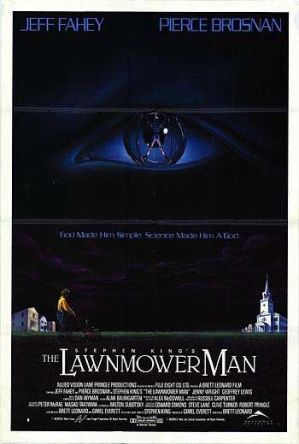 4
80s Movie about kid gaining super intelligence
13
Story about a guy who intentionally becomes ultimate bad guy to trigger societal change
8
Man gets super-intelligence from lightning strike
4
TV Series [1990s?] About a soldier lost in Amazon - Becomes super body guard
9
Identifying a SF anthology with one story about sentient pond water and another about a universal solvent