How can Statue of Liberty walk in The City That Never Sleeps?

In "Angels take Manhattan" (the last episode of Ponds), we learn that Statue of Liberty was a Weeping Angel.

A weeping angel goes to Quantum Lock if someone sees it. Then, how was a megastructure as large as the Statue of Liberty able to move in New York city (The city that never sleeps) especially when it wasn't moving silently (it was making noise and vibrations while walking)? 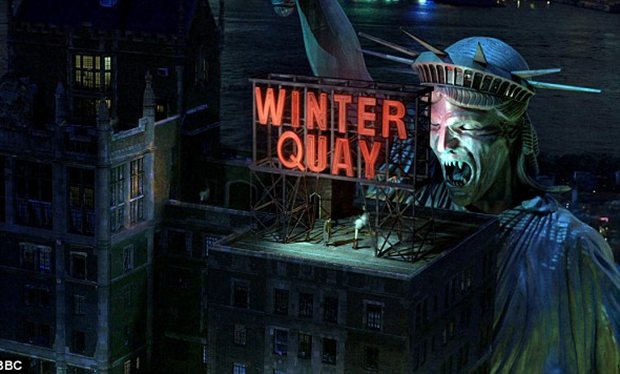 The Angels can do so many things. They can bend time, climb inside your mind, hide in pictures, steal your voice, mess with your perception, leak stone from your eye… New York in 1938 was a nest of Angels and the people barely more than farm animals. The abattoir of the lonely assassins!

In those terrible days, in that conquered city, you saw and understood only what the Angels allowed, so Liberty could move and hunt as it wished, in the blink of an eye, unseen by the lowly creatures upon which it preyed. Also, it tiptoed.

Adding onto this, there is at least some in-story precedence. In "The Time of Angels", when the Doctor realizes that all of the statues on Alfava Metraxis are, in fact, Weeping Angels, he suggests that he and his party may not have noticed them because the Angels could have been generating a perception filter, although he also considers that he and his party may have instead just been "thick." However, as the Weeping Angel on the video clip managed to create a deadlock seal out of nothing earlier on in that same story, it seems entirely within the realm of possibility that Weeping Angels, especially ones as well fed (and therefore more powerful, as also elaborated in "The Time of Angels" - DOCTOR: "Dinner to an Angel. The longer we leave it there, the stronger it will grow.") as the ones in Manhattan, who had a perpetually-generating food supply, could have created a high-level perception filter that would have put peoples' attention off of the Statue of Liberty. This was actually lightly alluded to in "The Angels Take Manhattan", when Grayle said, "These things are all over, but people don't seem to notice."

8
How can the Doctor be poisoned?
4
Fifth Season Finale- How can the Universe still exist?
16
How can The Doctor be the "last" of the Time Lords?
1
How Can The Doctor and His Companions Understand Unfamiliar Languages?
6
Is Jackson Lake correct in asserting that the Doctor has never been thanked for saving the world?
6
How come the Doctor and Clara will never be able to see each other again?
2
In the episode "Cold Blood", how can the Doctor remember Rory?
3
In the Angels Take Manhattan, The Doctor said that New York is the city that never sleeps and so a unique food source for the angels. Really?
6
How can they see the chairs through the Dark Water?