What's with Venkman, Egon, and the Nestle Crunch bar?

At the beginning of the original Ghostbusters movie, right after they get kicked out of the University, Venkman walks up to Egon and says "You.... you've earned this." and hands him a Nestle Crunch bar. Ray shoots them both a knowing glance with a smile.

Anyone know the reasoning behind this?

This was almost certainly a deliberate and paid-for 'product placement' by the filmmakers. Along with the Nestlé bar, there were also prominent and unsubtle placements of Coca Cola, Perrier, Cheez-its, Budweiser beer, real-world magazines, newspapers and pharmaceuticals ("Do you have any Excedrin or extra strength Tylenol?", "That's a very big twinkie", etc). 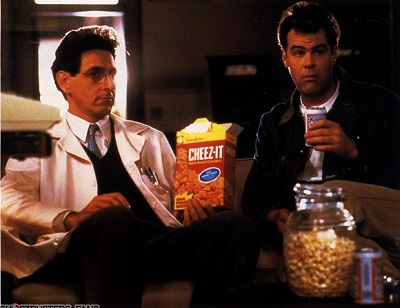 Interestingly, in the two official novelisations the bar was changed to a Baby Ruth in one, and unnamed in the other.

Venkman reached into his pocket. “Egon, I take back every bad thing I ever said about you. Here.” He held up a candy bar. Egon smiled delightedly and reached for it, but Venkman pulled it back. They looked at each other for a moment, then Venkman pressed it into his hands. “You earned it . . .”

“Baby Ruth,” Spengler said reverently, ripping off the paper and cramming it into his face. “Gooomph!”

In the comic series, Egon's favourite bar is replaced with a "chomp" bar, identical in size, shape, colouration and font to the Nestlé product but with a slightly different (and generic) name. 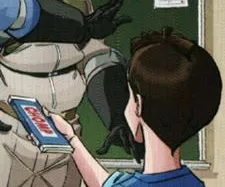 Spengler constantly snacking was a character trait origninally conceived by the writers.

In the DVD commentary, Director Ivan Reitman, writer/actor Harold Ramis, and associate producer Joe Medjuck are talking during the during the "Twinkie" scene, after Venkman is visited by Walter Peck.

Ramis: ... we also had this notion that Spengler snacks constantly.

Medjuck: I noticed that! He gets offered a chocolate bar at the beginning.

The candy bar scene in Ghostbusters was a reference to a scene in Caddyshack. The prank with the candy bar in Caddyshack was based on a event that Bill Murray experienced as a kid. Dan Aykroyd's laugh at the scene is genuine because the action is totally improvised by Bill Murray.

17
Did the gatekeeper and the keymaster get intimate in Ghostbusters?
19
Was Egon speaking the truth, or was he trying to haggle for a better price?
15
Why did Venkman have sedatives on his date with Dana?
1
By what mechanism did Dana and Loius Tully become possessed by the terror dogs?