In the 1982 movie "The Thing", is there ever any explanation why this polar base has several flame-throwers? They're clearly not home-made, like the ones in the first Alien movie. Why would a polar base have them as regular equipment? I've seen the extended version, but it doesn't seem to explain this.

Flamethrowers are not standard equipment at an Antarctic base.

The United States Antarctic Program (at the Amundsen-Scott South Pole Station) maintains a blog, and in Sven Lidstrom's entry for March 16, 2012 we read:

According to station tradition, we celebrated the first evening of winter by gathering in the gym after dinner to watch the sci-fi move The Thing — both the old and new versions. This might have changed a couple of people’s expectations of our coming winter, but now we know how to deal with alien monsters. However, we have yet to locate flamethrowers, as they are not in MAPCON, the U.S. Antarctic Program’s material and maintenance tracking software.

I'm not aware of any in-universe reasoning for why they have them in The Thing, but out-of-universe it must be attributed to either Rule Of Cool (beware: TV Tropes link) or plot error.

This flamethrower is used by several members of the team throughout the movie. Palmer uses a different flamethrower, apparently a propane powered model sold commercially, used for burning weeds, and removing ice from planes and other equipment; the flame on the propane model is very short, at most usually 7 feet. Even so, many scenes in the film use genuine, military-spec liquid-fueled flamethrowers, something of a rarity in movies. 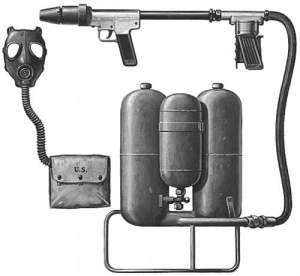 Palmer's has a conceivable use in this environment. As to why they have military grade equipment? Travel to Antarctica was historically by military aircraft, so this is not completely unreasonable. More likely though, it's because stuff in Hollywood is cool. As for in Alien, space is cold, too. Experience dealing with ad-hock incendiary devices is a useful skill aboard mining vessels like the Nostromo. Available commercially people use these to melt ice. 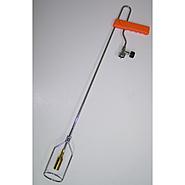 In the novel by Alan Dean Foster: 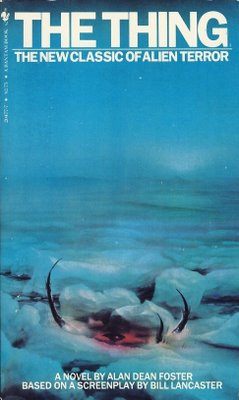 Childs is an excellent mechanic and actually turns welding equipment into flame throwers. In fact, page 104 reveals that Childs built the extra flame-throwers for use against The Thing.

Childs and Palmer turned a room into a greenhouse for their marijuana plants, after all.

TL;DR: The only real answer is that it looks cool.

As IMFDb says, there is really only one true flamethrower in the movie: an M2A1-7 military grade flamethrower. The other device is actually a commercially available propane torch designed for burning weeds and melting ice and snow. The M2A1-7 has absolutely no business being in Antarctica; the torch is much more plausible as a piece of Antarctic research station equipment.

Although the torch has been dressed up to look more formidable, it is basically the same thing as this less impressive (but still kind of cool, in a "shoots fire at stuff" kind of way) device: 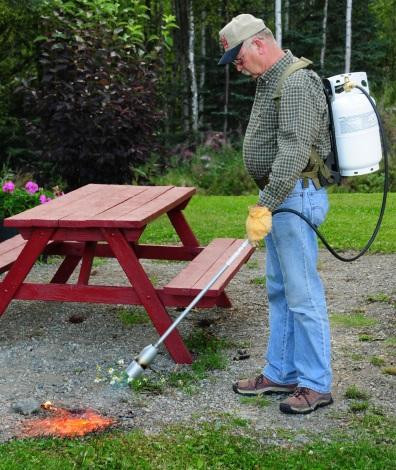 Why do they have an M2A1-7 Flamethrower?

Because it looks cool.

Q: What was the logic behind having flamethrowers in Antarctica? Even Childs sounded surprised.

A: None – but we liked the visual metaphor – fire and ice...

Same goes for the guns - there are no animals bigger than penguin in the interior of Antarctica, so there is absolutely no need for being armed there, but it is, in part, an action movie, and we are used to seeing gunplay and fireballs in action movies, so they gave us both. They needed a plausible way to fight the Thing as well, obviously, and fire makes sense in that respect.

The movie always struggled to take a story about a slow decline in mutual trust escalating into paranoia and near-insanity and make it fit into a 2 hour timeframe. This probably ruled out any chance of build-it-yourself weapons, or made it less desirable to introduce them, and the weapons were never the point anyway. The story is built around fear, distrust, and paranoia.

My best guess is that Carpenter didn't care about how the characters got their weapons, he just wanted to focus on the characters themselves. Who cares about the plausibility of flamethrowers when aliens are assimilating everything in sight?

Some of the other answers have offered marginally plausible explanations for the flamethrowers, but I don't see any way to explain the thermite grenades.

However, that doesn't stop me from saying that this is the greatest science fiction/horror movie ever made. The psychological suspense is where it's at, all logistical problems aside.

This is why the crews who serve at American research stations in Antarctica watch the movie the night before they head home. They know better than anyone else that there aren't flamethrowers there, but they also know that the flamethrowers are a minor issue in an otherwise incredible film.

What does the source material say?

In the original novella upon which the movie is based - Who Goes There? by John W. Campbell - they have "giant blowtorches used in warming the plane's engines".

McReady wedged men out of his way and drove down the narrow corridor packed with men unable to reach the scene. There was a sure fore­planned drive to McReady's attack. One of the giant blowtorches used in warming the plane's engines was in his bronzed hands. It roared gustily as he turned the corner and opened the valve. The mad mewing hissed louder. The dogs scrambled back from the three­ foot lance of blue­hot flame.

Other than for melting ice / snow, I can't see why a scientific research facility would have military-grade flamethrowers.

Yes, the flamethrower is possibly the coolest "anti-monster weapon" in cinematic history, but I doubt whoever was charged with providing the crew of the Antarctic research base figured they would encounter an alien being!

I guess John Carpenter figured it would look great against the backdrop of all that ice, snow and sub-zero temperatures.

In the Antartic, all our biological waste and garbage freezes, and refuses to bio-degrade. Maybe the U.S. government equipped their outpost with surplus flamethrowers to get rid of them (since they were outlawed by convention) and so that they could be used to burn biological detritus (and hostile aliens).