A someone who frequented King's Cross a great deal for commuting, one things always struck me as odd: Platforms 9 through 11 do not have the large pillars shown in the movie that is used for access to 9¾.

Here's a picture of Platform 9: 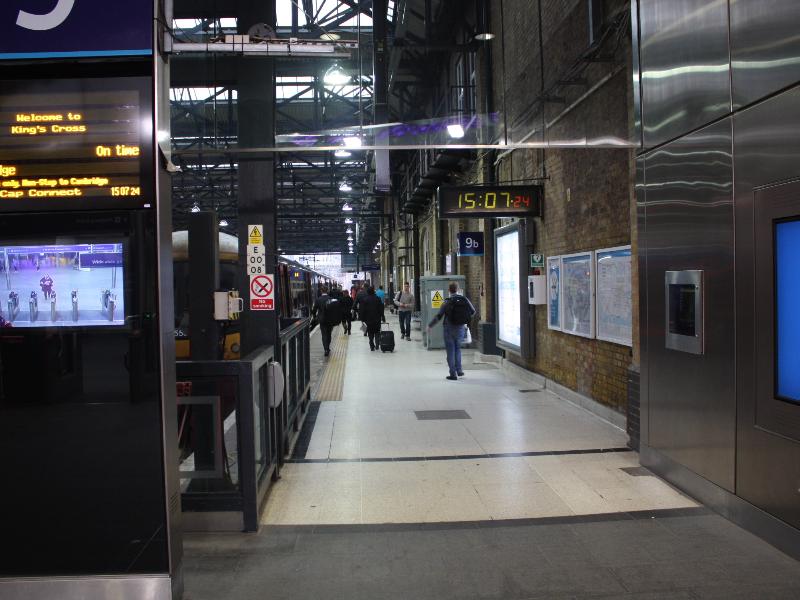 Did Rowling write the book having never seen the platforms themselves?

I don’t know if she’d seen them before, but the platforms don’t make sense because she mixed it up with Euston station.

Interestingly, in an interview with the BBC in 2001 JK Rowling admits confusing Euston station with Kings Cross Station. “I wrote Platform 9 3/4 when I was living in Manchester, and I wrongly visualised the platforms, and I was actually thinking of Euston, so anyone who's actually been to the real platforms 9 and 10 in King's Cross will realise they don't bear a great resemblance to the platforms 9 and 10 as described in the book. So that's just me coming clean, there. I was in Manchester; I couldn't check.” In fact, even at Euston station platforms 9 and 10 are also adjacent meaning that once again, there would be no room for a magical brick wall!

That’s from a Historic UK article about Platform 9 3/4; the full interview can be read on Accio Quote.

The article also explains that (at least for Chamber of Secrets), they used platforms 4 and 5 instead of the real 9 and 10.

The HP Lexicon has a Gallery of London Location, which includes pictures from the relevant platforms in King’s Cross and Euston.

Extracted from Harry Potter: Magical Places from the Films by Jody Revenson

It would be natural to assume that the filmmakers would use King’s Cross station’s real platforms nine and ten for the location shoot. But as Stuart Craig explains, ‘Platforms nine and ten are not in the main station building, but in a little annex to the side.’ Craig wanted to showcase the station’s Victorian architecture and get a strong image: ‘We chose a platform that had big brick piers, under big supporting arches that connected to another platform, which gave it a substantial wall to run at before they pass through it to the other side.’ Platform nine and three-quarters was actually set between platforms four and five.

11
The Muggles of King's Cross and their suspicion of Hogwarts students
31
Who is Gilderoy Lockhart based on?
6
What was the scene in King's Cross all about?
7
Is the other piece of the soul in King's Cross station Voldemort's main soul or the piece in Harry?
14
Other than edits for international editions, did Harry Potter and the Philosopher's Stone receive errata?
71
Did Dumbledore lie to Harry about how long he had James Potter's invisibility cloak when he was examining it? If so, why?
55
Had J. K. Rowling seen This Is Spinal Tap before writing Harry Potter and the Philosopher's Stone?
3
Why does Harry Potter need to go to the King's Cross station with a guard at the beginning of his fifth year at Hogwarts?