Where is Alfred Pennyworth in the Batman origin story?

I was wondering if Alfred's whereabouts or duties during the night Bruce's parents are murdered are ever discussed.

Most of my knowledge of Alfred and Bruce's relations comes from movies and TV shows, not the comics. But Alfred has taken care of Bruce in many ways and there are multiple references to him being around when Bruce's parents die.

So what exactly what is he doing that night? Did he just have the day off?

I wanted to give this a thorough answer, so I got off my butt and scrounged among my comics to find a solid example. It depends on which iteration of Batman you're talking about. Generally his lack of presence isn't explained. In fact, he doesn't even usually pick Bruce up at the police station- instead, Gordon usually drops Bruce off at home.

In the recent Batman "Earth One" Alfred is given a very different back story. He and Thomas were military buddies in a unspecified war and Alfred is less of a 'high class English butler' and more of a 'rough and dirty but dangerous and capable vet'. On the night in question, he stays behind under strict instructions from Thomas Wayne (a shoe-in for the upcoming Mayoral elections) even though Alfred is extremely concerned about his safety:

Alfred: You have a lot to lose, don't you?

Thomas: They're from everywhere. It comes with the territory. What? Alfred--

Alfred: Do you think the death threats are from your political opponent? You called me because you wanted someone on security you could trust. That means you're having concerns about the people closest to you. The people who are in this house right now.

Thomas: As soon as I'm officially elected, we'll get to work. But not tonight. Tonight I'm just a father.

Bruce runs out screaming that he wants to go to the movies. Then...

Thomas: I promised Bruce we'd take him to a movie. He's been dying to see it.

Alfred: Who's going with you? [he means security-wise]

Alfred: You shouldn't be going out right now.

Thomas: We go out every week as a family. That's not going to change.

Alfred: It has to.

Alfred: I'll come with you.

Thomas: After the election, Alfred. I appreciate the concern, but I won't give up our nights out. I want Bruce to have a normal life.

As seen below, they finish the argument, and Alfred is left quietly behind. You know what happens next. 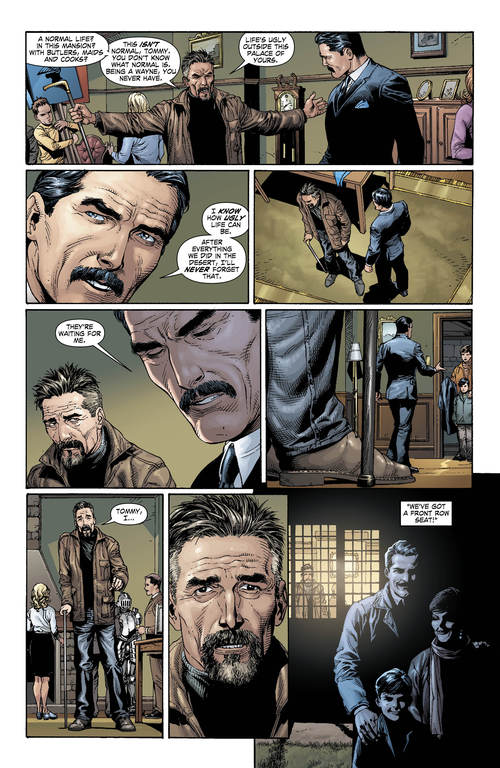 The only definitive reference I can find in the comics is in Batman: Earth One, where Alfred is at Wayne Manor. The full context is that Alfred wanted to accompany the Waynes to the movies in order to protect Thomas (Who was a mayoral candidate in Gotham City at the time and a very likely target for fowl play), but Thomas wanted Bruce to have a "normal life".

Truthfully I'm not entirely sure where Earth One fits into the New 52 continuity. In any case it's not exactly a standard telling of the origin story, so your mileage may vary.

As near as I can reason, absent any more detailed information, there are three places Alfred could have been in the "classic" telling:

1 Although it's of questionable canonicity, since it's a video game, this is the approach taken in Rocksteady's Arkham game series. In Arkham Asylum, Batman is forced to relive his parent's death by Scarecrow's fear toxin. Part of that experience includes the last conversation he ever had with his parents:

Thomas Wayne: I can't believe you insisted on sitting through that movie again, Bruce. Come on, we'll be late for Alfred.
Bruce: I'm sorry Daddy.
Martha Wayne: Go easy on him, Tom. He loved it so. Alfred will wait. Keep up, Bruce! Where are you taking us?
Thomas: We can cut through here.
Martha: But it's starting to rain. Bruce is tired! Can't we just wait for him here?

The dialogue indicates that Alfred was on his way to pick them up at the theatre, and Thomas insisted on taking a shortcut through what would become known as Crime Alley. Quite why Thomas insisted on that shortcut, since Arkham City establishes that the Waynes were murdered literally immediately behind the theatre (Practically beside their dumpsters in fact), is a different question.

Many times that the story of the Wayne's being murdered is told in the comics, the going-out-to-cinema is either a regular special event for the family (in spite of being really wealthy they wanted to do a "normal" family thing) or is a reward or treat for Bruce, for one reason or another.

The thing is that the Waynes wanted to enjoy that night by themselves, so Alfred wasn't chauffeuring them to start with. Given the time of the event, and the fact that as a butler he is some kind of in house service, he was probably at the Wayne Manor, available but not really working at the time (it seems that Alfred is an avid book reader), but he might have been cleaning the silver as well, for example.

In the story Zero Hour, Batman sort of travels to an alternate timeline where Bruce was killed that night, and his parents survive. When he gets to Wayne Manor Alfred is there, but it seemed he wasn't working, since he wasn't wearing all his "butler outfit", so he could have been resting/relaxing. When doctor Wayne and his wife come with the police and bad news, Martha Wayne requests Alfred to help some drinks to the police officers, and he gets back to work.

In other stories, such as Batman Earth One, which is a retold of the story,

Alfred is actually a friend from the military service of Thomas Wayne. He advises Thomas not to go by themselves to the theater, but Thomas insists, since he wants "a normal life" for Bruce. After the death of his parents Alfred has to assume guardianship of a really enraged Bruce, and he lies to him, telling that he was hired as his butler, as a excuse to be able to stay there and take care of him.

Apart from that, not much has actually ever been discussed in the comics about Alfred whereabouts that night, so I think that assuming that he was at the Manor, on call but not really working might be the safest bet.

In the original continuity, Alfred didn't work for the Waynes until after Bruce had already taken up the mantle of Batman. He first appeared in Batman 16, in 1943, four years after his employer's first appearance.

15
Why are some villains in Gotham so much older than Bruce Wayne?
68
What was the origin of the meme where Batman slaps Robin?
13
How much money does Alfred Pennyworth earn?
13
Is Alfred the moral conscience of Bruce Wayne/Batman?
6
Are there any alternative origin stories for Batman?
5
Searching for a Batman comic where Batman had no dialogue and Robin and Alfred were the primary characters
8
Where was Alfred Pennyworth following the events of No Man's Land?