Why does Andrea later look like Amy in The Walking Dead comics?

When Andrea and Amy from Atlanta met up with Rick's crew in The Walking Dead comics, they were obviously two different looking sisters.

Amy had freckles and stringy hair tied in a ponytail (left) while Andrea had a clear complexion (no freckles) with longer hair, styled down the sides of her face (right). 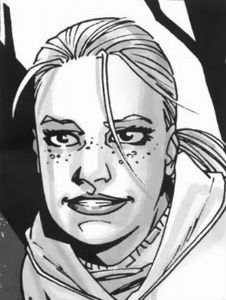 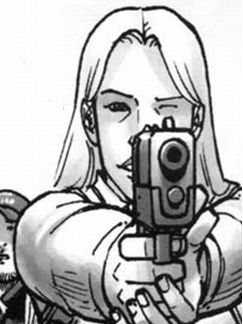 But after the attack at the prison and after her sister was bitten and killed off, Andrea is sporting freckles on her face, with what looks like stringier hair, tied at the back: 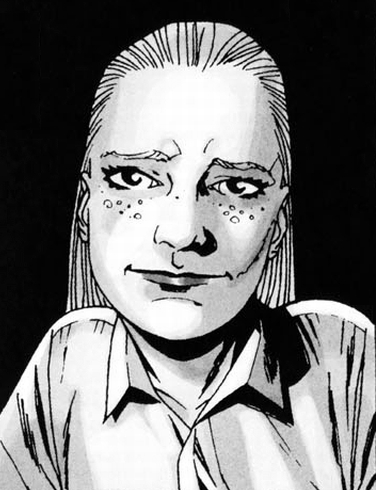 Is Andrea channeling her sister? Or is the crack shot of the group really in fact Amy and that it was Andrea that was bit and taken out?

What in-universe explanation accounts for why Andrea looks like she's really Amy?

This has been discussed in the She Has No Head! column on Comic Book Resources, specifically this article about the women of the Walking Dead. Definite spoilers await there, so you are warned.

The relevant bits from that article are:

In fact, the most interesting thing about Amy is that in my opinion there was a screw up in the design of Amy and Andrea. Initially Amy is drawn with freckles and “stringy-er” hair generally pulled back in a ponytail (see my chart below!), while Andrea is portrayed sans freckles and with hair usually down and in one solid mass. After Amy dies, Andrea is suddenly the one with freckles and pulled back hair…I’ve re-read the section of The Walking Dead where this occurs a few times now and I’m convinced it’s a screw up…that there was confusion perhaps between Moore, Adlard, and Kirkman about which character design was which…and then they just stuck with the screwup, rather than correcting it, which might have been the right decision…but is a bit odd to see. Weirdness I say!

There's even a picture:

So yes, this has been indeed noticed by the comic book culture at large. The switch came when original artist Tony Moore left and current artist Charlie Adlard took over. Amy was never drawn by Adlard, so it is entirely possible that he accidentally used the Amy design for Andrea and they never looked back.

I noticed this while reading the comics, too. I had to make the effort to stop dwelling and see past the freckles when they first appeared. Little things like that make my brain tweak. (Like the continuity lapse of Amy's gun holster in Vol. 1, at the campfire scene just before she gets bit.) In magical library somewhere, there are copies of comics in which all these accidental omissions of detail are gone.

The the explanation with which I sate myself goes something like this: Andrea and Amy are sisters (twins?). Amy was an athletic sort of girl, probably out in the sun a lot. Andrea had been an indoors, out-of-the-sun office clerk. Being in the sun gives you freckles - Amy had freckles, so most likely Andrea would also get freckles once she ditched the office. Also, a zombie-killing-vagabond lifestyle doesn't require the same personal hygiene and presentation habits as an office job. Thus, post zombie apocalypse, as Andrea becomes more active and outdoorsy, she would naturally start to model the same appearance as her late sister (freckles, less kempt hair).

So, in my mind, that's why Andrea looks like Amy did. Andrea also explains at one point how her sister was more outgoing and had more of a "life" than Andrea did, before the end of the world. Prior to apocalypse, Andrea felt boring and purposeless, however after discovering her niche, she actually has a life that she never would have found other wise (i.e. becomes more like her sister had been). And, people often begin to look like other people they admire - in this case Andrea admired some of Amy's qualities. Now that Andrea has begun living with those qualities, she may start emulating Amy, because Amy was her previous example of those qualities.

BS on my part? Yes, totally. But it works for me.

I'm pretty sure I did a double take when I saw Andrea drawn anew in Vol. 2, flipping back through Vol. 1 (TPB) to make sure I wasn't crazy or that inattentive. Maybe Charlie Adlard just has a thing for freckles on his characters in this comic. I think there's at least 2 others that have freckles. I don't think of freckles as the norm in comics, and comparatively, they seem to appear quite frequently in WD. (Of course, I might be wrong. I don't read a ton of comics. I rent these through interlibrary loan, and while up to date - besides Vol. 15 - I've only read everything once.)

Note: in both examples above "Original Amy" is Adlard's version of Amy (not Tony Moore's), which is compared to the "Original Andrea" drawn by Moore.

While both examples still get the point across, for a better presentation, they should use Amy and Andrea as drawn by Moore in Vol. 1 (as example 2 does, showing them side by side), and then compare them to Andrea (and Amy) drawn by Adlard, and clarify who draws whom.

I remember reading the comic when it first came out. Andrea was the original younger sister and Amy the older sister. I don't know when they changed the roles, but it was due to the TV show. If you read the first book to the Walking Dead you can see the change in the art work in the first book.