In The Walking Dead Season 4, why did the Governor... [spoilers]

The Governor hooks up with Martinez's group, and they play a game of golf from the roof of a caravan.

Martinez offers The Governor joint leadership of the group, and The Governor whacks him over the head with the golf club and drags his body into the pit of Walkers.

He repeats the words "I don't want it" while doing this, yet his actions afterward show him in pursuit of a leadership role, which he eventually takes. Why did he

kill someone who was (and would again be) a trusted lieutenant?

Is he just crazy? If he didn't actually want leadership, why not just say "no thanks" instead of

The Governor's actions are actually all driven by fairly rational processes, and chalking everything he does up to "he's just insane" does a huge disservice to a very complicated character.

The reason that the Governor has no choice (in his mind) but to kill Martinez is that Martinez is the last person alive who knows his past. Martinez was there for all of the worst things the Governor has ever done, up to and including his butchering of all those who followed him into battle against the prison group. It's made very clear in the preceding events that the Governor is trying desperately to keep all of that hidden. It's pretty much explicit in the scene where his new group has just found a pack of beer and is sitting down, chatting, and he has to quickly cut Martinez off from exposing him.

Mitch: I can never tell if he's winkin' or blinkin'. But you know how to regulate, don't you, Bry?

Martinez: Oh, yeah. Ice in the veins. You should've seen him back in the day--

The Governor: What about you fellas, huh? What'd you do before it all changed?

Now let's examine the murder dialogue and sequence of events.

Martinez: Your family, they brought you back. You're lucky. Couldn't... I couldn't do that again. Couldn't risk it. Couldn't sleep at night, knowing I was gonna lose 'em.

The Governor: What, you, uh... you don't think you can keep this place safe?

Martinez: I'll try. Hopefully we'll be prepared for whatever comes.

It's as Martinez says this line that the Governor looks up and has clearly decided to kill him. You can see his face change right there. And upon the next line, the golf club comes down on his skull.

Martinez: Now that you're here, maybe we could share the crown a little. [hits golf ball] Ah, Jesus... I shoulda taken some golf lessons. Before the--

The Governor already knew before this that Martinez was a liability and would have to be dealt with in one way or another. He knew he would probably have to kill the man. But when Martinez told him that he was certainly going to lose his new family, partially because he had no confidence in his ability to keep his people secure, it cemented it in his mind. Martinez had to be removed, both because of his knowledge and because of his inability to lead.

Obviously that's open to literary interpretation and opinion. However I believe that he is being genuine in that moment. He doesn't want the power. He doesn't want to lead again. He would have been perfectly happy just joining some group and being with his family and doing his part, raising his new daughter, being with his new wife. That's why he burned up the photo of his old family, after all. They were irrelevant now. These new people were his life.

But the group he ran into just happened to be one that contained the only person living who could expose him for the vile man that he was, or that he had once been. It had the only person who could with just a few sentences take away the amazing second chance that he had been given. And in a stroke of even worse luck, it was that man who happened to be in charge of that group.

He didn't want it.

It's also very clear that he doesn't want the power at all, because even after Martinez is dead he doesn't try to seize it. He lets Pete be the leader. And when things start to go badly within the group and the internal power struggle happens, he doesn't take part in it. He tells his family to get into the camper and to pack their things. They try to flee. He genuinely doesn't want to kill anyone else.

But when their camper is blocked by a giant puddle full of Walkers, he has to turn back around and go back to that broken group. And it's at the point that he believes he has no choice. If he can't leave the group, and if the group is lead by morons who are going to get the people he cares about killed... well, he has no choice but to lead it.

TL;DR: Because Martinez knew too much, and wasn't fit to do his job of protecting the community.

Martinez: If it was just you in that pit, I wouldn't have brought you into the camp. If it weren't for the people you were with... the girl... You seem different now. Changed. Are you?

There was also reason to suspect that Martinez would spill the beans on the Governor. He had already ribbed the Governor about his recent name change from Phillip to Brian:

[Martinez whirls around and looks at Lilly, clearly confused; the Governor is obviously concerned]

Martinez: If you come back with us, there's two things you've got to accept: One, I'm in charge. Two, no dead weight. That goes for everyone. [Turns back and looks at Lilly for a moment] Contribute, or be cast out. [Turns back to the Governor] Can you live with that... [Pauses for a full three seconds] "Brian"?

He has made two mistakes here:

Governor: I say leave the past in the past.

Well, now Martinez is boss, and he goes out of his way to make sure the Governor sees it: 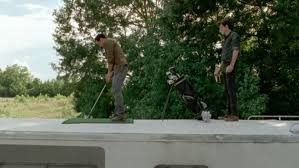 Martinez:Aw, damn it. Hand me another one.

Martinez: He was never the same after Woodbury. He got reckless. Biter took a piece of him right over there. I swear, he didn't try to get out of the way. I put him down myself. Right over there. There's some things you just can't come back from. They become a part of who you are. Either you live with them or you don't.

Governor: Well, you seem to be living with them pretty well.

Martinez: So are you. That family, they brought you back. You're lucky. I couldn't-- I couldn't do that again. Couldn't risk it. Couldn't sleep at night knowing I was gonna lose them.

Governor: I'm not gonna lose them.

Governor: What, you don't think you can keep this place safe?

Martinez: I'll try. Hopefully we'll be prepared for whatever comes. Now you're here, maybe we can share the crown a little. Oh, Jesus. I should have taken some golf lessons before the--

Martinez made a series of catastrophic mistakes here:

The Governor doesn't "want" to be in charge, but he has no choice. His new family and his old grudge against Rick are all that matter to him, and he can't protect his family or kill Rick with Martinez stumbling around drunk and possibly telling everyone how dangerous the Governor is.

Well, if we look at the governor as a new character when we see him in season 4 we can get our answer. If we skip Woodberry and know nothing about the governor, we can only get his backstory from Martinez. The governor being a control freak, and not wanting how corrupt he is to be exposed, tying up loose ends is his only choice.