The movie has a teen girl who is a robot. What I remember most is that she was standing at the top of some stairs and watched a basketball roll down each step. She malfunctions and makes noises like "beep beep". I think she had blonde hair and was wearing blue sweats.

Possibly Deadly Friend, a Wes Craven movie from 1986. Samantha, a blonde haired girl next door, is rendered braindead by an accident involving a set of stairs. The microchip of a robot is implanted into her head, reanimating her. She later kills a neighbor using a basketball, decapitating the neighbor with the thrown ball. And yes, there's a scene with the ball bouncing down some stairs as can be seen in the trailer below. I have yet to find a picture of her pants, but she wears a blue shirt through most of the latter half of the film. 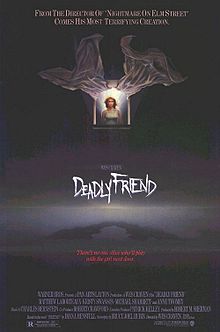