Does this ring any bells? The airships were plant forms that floated and could be used for transportation. There was a diverse cast of characters on some quest, including some sort of psychic centaur-like creature.

It has the living airships:

“That’s our way off this cliff,” he said. “His name is—” he pursed his lips and whis­tled three clear notes with a war­ble at the end, “—but I see that’s awk­ward to use mixed with Eng­lish. I call him Whistlestop.”

He looked at her oddly and she grit­ted her teeth. “He looks more like a di­ri­gi­ble, but he’s not, be­cause he doesn’t have a rigid skele­ton. I’ll call him and you can see for your­self.” He put two fin­gers to his lips and whis­tled a long, com­plex tune with odd mu­si­cal in­ter­vals.

The Ti­tanide found them while they were tak­ing down the tent prior to mov­ing Bill. It stood on the top of the bluff where Cirocco had been the day be­fore. Cirocco waited for it to make the first move, but it seemed to have the same idea.

The most ob­vi­ous word for the thing was cen­taur. It had a lower part shaped like a horse, and an upper half so human it was fright­en­ing. Cirocco was not quite sure she be­lieved in it.

It was not as Dis­ney had en­vi­sioned cen­taurs, nor did it have much to do with the clas­si­cal Greek model. It had a lot of hair, yet its dom­i­nant fea­ture was pale naked skin. There were great multi-col­ored cas­cades of hair on the head and tail, on the lower parts of all four legs, and on the crea­ture’s fore­arms. Odd­est of all, there was hair be­tween the two front legs, in the place where a de­cent horse—which Cirocco’s mind kept try­ing to see—had noth­ing but smooth hide. It car­ried a shep­herd’s crook, and but for a few small or­na­ments, wore no cloth­ing.

The Blimps and Centaurs "speak" a very music-based language, but it's hinted that it may have a telepathic component.

The first book, Titan, is a fairly straightforward adventure story. The second book, Wizard is more of a "quest" type of story. The last book, Demon is a post-apocalypse/revolution/war story with a little social commentary thrown in. From the OP's question it sounds like they may only have read the second book. Although the third book has more of the post-apocalytic events, it also has a... larger-than-life character that would be pretty hard to forget.

I believe this is Dark is the Sun, by Philip Jose Farmer. It's set in the very far future, the characters travel in/on a giant plant pod for part of their adventures, and one of the characters is a plant-centaur shaman with psychic powers. The group of main characters were trying to recover their stolen 'Soul Eggs'. 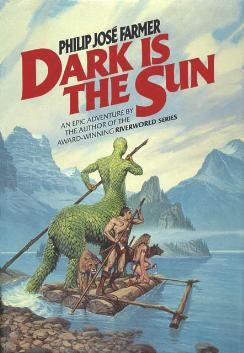 7
Post apocalyptic novel, one character a centaur with a mouth in the middle of its chest
3
Looking for a book titled 'The Wizard'