Is Unobtanium an element or a compound?

Unobtanium is described as a "highly valued mineral" found on Pandora. But according to the Wikipedia, "A mineral is a naturally occurring substance that is solid and representable by a chemical formula".

This description includes materials like Diamond which only contain one type of element (Carbon [C]), and materials like Quartz which are compounds (Silicon Dioxide [SiO2]).

I am not asking for any scientific proof, because that would be off topic here. But I would like to know if there is canonical information on the type of Unobtanium. Is Unobtanium an element or a compound?

In the book Avatar: An Activist Survival Guide by Maria Wilhelm and Dirk Mathison, many topics about both the planet Pandora and the Na'vi culture are explained at more detail.

In the section Astronomy and Geology, Unobtanium is described as a compound.

When the world's first high-temperature superconductor was created in the late twentieth century, it proved to be useless because of inherent instabilities. Further efforts proved futile, and researchers finally termed their goal “unobtainium” (the spelling was later changed to “unobtanium” to conform to chemical element naming, although unobtanium is a compound, not an element). There matters stood until the first unmanned exploration vehicle reached Alpha Centauri A and discovered deposits of a high-temperature superconducting substance on an Earth-like moon named Pandora—unobtanium had been obtained at last.

However, as noted by Richard, the same book in page 18 shows a picture of Unobtanium with a periodic table element shown as #120. 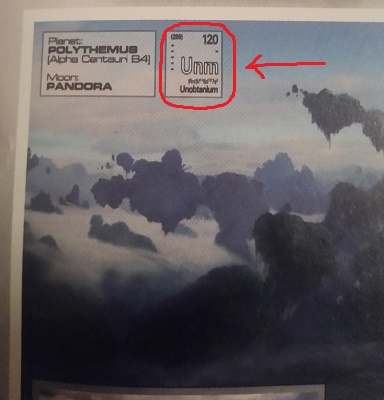 So, given that the book is not consistent with itself, the answer is not clear. However, I think the first information has more prevalence, since it's meant to be read and understood, while the next picture is just for illustration purposes and not part of the main text.

23
Why was the name 'unobtanium' used in Avatar?

5
If the Hallelujah Mountains are made from Unobtanium why attack Home Tree?
23
Why was the name 'unobtanium' used in Avatar?