In story, how did Clark destroy the truck in Man of Steel without being caught?

On January 12, 2012, we received one of our first glimpses of an intriguing visual from the set of Man of Steel. 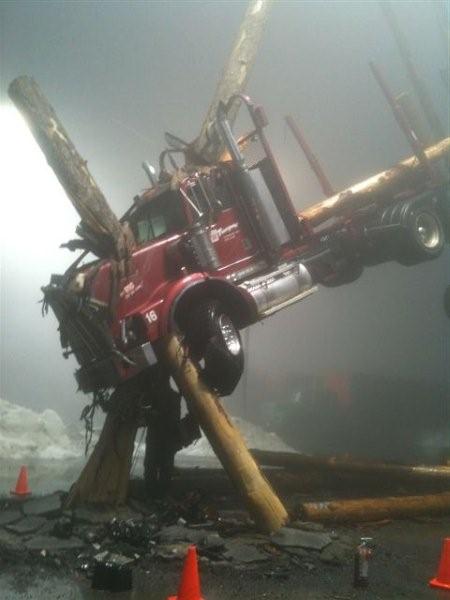 It was one of the first released materials and likely earlier in production. In the film, the final scene looks like this:

Could you walk me through the sequence of events from where Clark, in the heat of the moment, decides to vent his frustrations on this truck, where the end result is as we see it AND Clark does not get caught in the process?

Cool question - I can maybe help fill in some details.

Having witnessed the filming of this scene, (super fun!), I'd say you've nailed it with: "...Clark knows that the singer, played by Allison Crowe, has a particularly deafeningly loud part of her act, and coordinates his actions with this aural camouflage."

I serve as manager to Allison, the Canadian musician performing in Cassidy's Roadhouse. It's not seen in the released version of "Man of Steel", but after Clark's altercation with Ludlow, the barman Weaver (played by the terrific Howard Siegel) yells out from behind the taps:

This propels Clark into his act of mischief. Exiting the back door of the bar, with Ludlow bouncing an empty can off him... he's then in the parking area that's behind the building off the highway.

Allison resumes her musical performance, and, indeed, things gets really rocking. The denizens inside Cassidy's are raucous, and this provides plenty of cover for Clark to prepare his surprise for Ludlow - who's enjoying his fill of brewskies before venturing out again to his truck.

The best I can come up with has a disturbing amount of premeditation. Clark hijacks the truck, drives it to nearby seclusion, performs a complicated juggling act to get the truck just about as we see it, then drags his masterpiece back to the Roadhouse, and then for artistic effect ensures the cargo is strewn about, while using his super-hearing and x-ray vision to ensure he isn't disturbed.

Alternatively, Clark knows that the singer, played by Allison Crowe, has a particularly deafeningly loud part of her act, and coordinates his actions with this aural camouflage.

Is there a better in-continuity, diegetic explanation?

7
In Man of Steel, how did the phantom drive create the singularity?
19
In "Man of Steel", how did Superman get his super-suit?
17
Why aren’t the Kryptonians powerless in their biosuits in Man of Steel?
3
How does 'Man of Steel' differ from how Superman is portrayed elsewhere?
8
Did the World Engine from ‘Man of Steel’ appear in Superman comic books?
7
In "Man of Steel", where did the codex come from?
1
In the Man Of Steel movie where could have the kryptonians gone after being sucked by the black hole?
21
How does Clark Kent get his job at The Daily Planet in Man of Steel?
2
In the 2013 movie Man of Steel why doesn't Jor-El simply cripple or destroy General Zod's ship?