Is the Destiny's shield the most powerful shield in the Stargate universe?

Asgard's shields are said to be the best. But isn't the Destiny's shield the most powerful shield in any spaceship? This can be concluded because it was able to survive in a star.

Does this mean that no weapon in the Stargate universe can harm Destiny?

At minimum, the Destiny's shields are not better than Atlantis's shields.

Destiny is the oldest1 Ancient technology we have ever seen on-screen. It was launched while they still lived on Earth, before they built the Milky Way's gate system - its gate technology was far more limited, and only able to reach a couple Stargates in the galaxy at a time. Likewise, the gate address to Destiny was stored in the database using the Milk Way gate system's glyphs.

In Stargate: Atlantis, the Daedalus's Asgard shields were shown many times to vastly more powerful when powered by an Ancient ZPM. However, it has never managed to stand up to multiple Wraith hive ships for very long. Atlantis's shields on the other hand, can last an extended amount of time against multiple hive ships.

As far as I know, there has never been a direct comparison that would let us determine how strong Asgard shields are compared to the Destiny. Atlantis's shields may or may not be stronger than Destiny's shields, but they're definitely not weaker. However, I would bet that they are stronger due to the huge time span between when Destiny was built and Atlantis was built.

1 Well, just about the oldest. There are a few scenes in the movie The Ark of Truth that are from even further in the past, showing some Ancients escaping the Ori. In the second one, we see some pages in a notebook that show a Stargate being designed, with its owner saying "I had the most amazing idea last night...". Some of the technology in the background is reminiscent of Destiny's technology, or what it might have looked like before it had been run down by age. 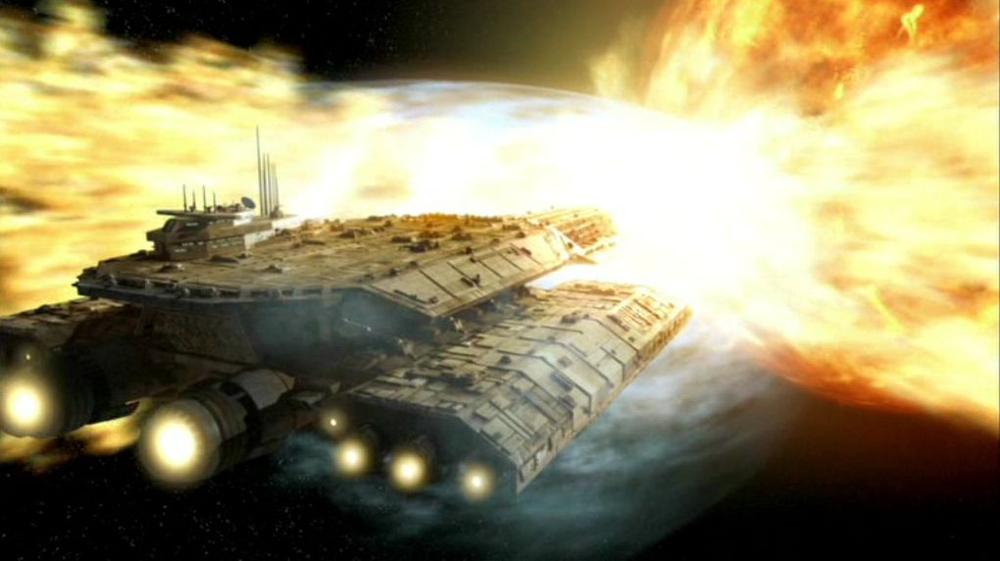 Theres a SG1 Episode called "Space Race" where an alien vessel named "Sebrus" slinghots around the sun while being in the corona.

Altough there is the well known SG1 episode where Carter detonates a stargate inside the sun to cause an explosion of the sun to destroy an huge number of Goauld ships.

So it seems the power of shield technology in StarGate varies from race to race.

Destiny was launched millions of years ago. Technology moves slowly but when it moves it moves in leaps, now saying that. The ancients have had millions of years worth of technological advancement since then. So have the asgard and the furlings ( I know we haven't seen them, but I'm putting them on the same level as the two pervously mentioned because they were at one point)

(Back to my point) there would be many ships shields stronger than Destiny. My list goes,

( another note ) if the SGC was able to utilise all the asgard advancement giving to them. ( may take some years to achieve) and create a new ship, a Bc- 305 it would move up to 3rd on the list.

Not the answer you're looking for? Browse other questions tagged stargate spaceship or ask your own question.