Was President Kennedy a mutant? Or, did Magneto lie?

In the X-Men: Days of the Future Past movie, Magneto was inside the Pentagon prison because he killed JFK (the bullet turned in the air as per official records).

Later, when Xavier asked Magneto about it, Magneto said that he was trying to save JFK because JFK was a mutant.

Was JFK really a mutant? I know the movie doesn't have any more information, but is there any official statements to back this up?

Bonus: Is JFK a mutant in any comic continuity? I am interested in comics because movies often borrow contents from comics.

Yes, JFK was a mutant.

“The notion was that Trask was a little bit involved in the assassination of JFK. I’m just telling you back story, it’s not in the movie, but Trask identified that JFK was a mutant, and then the people that wanted JFK killed for all their political reasons, whoever it actually was who actually killed him, they were motivated by the fact that this guy was a mutant. So Eric got wind of that, and tried to stop them, but there were too many of them.

“We talked about what JFK’s power was for quite a bit, and my answer for you may be a bit obvious and not that smart, but it’s a telepathy, a mind-control, the ability to persuade people to do things. There were other theories from other people that were slightly more… tawdry.”

The official ARG/viral site, M-Underground has posted a few new images regarding JFK. These new images indicate mutations which may not be psychic/telepathic in nature.

These "classified documents" refer to the concern of JFK's mutant nature being exposed to the public due to side effects.

This image notes that the "allele histamine" he is using is

A medicine label for an allele histamine that allows for JFK Jr. to alter his physical appearance. 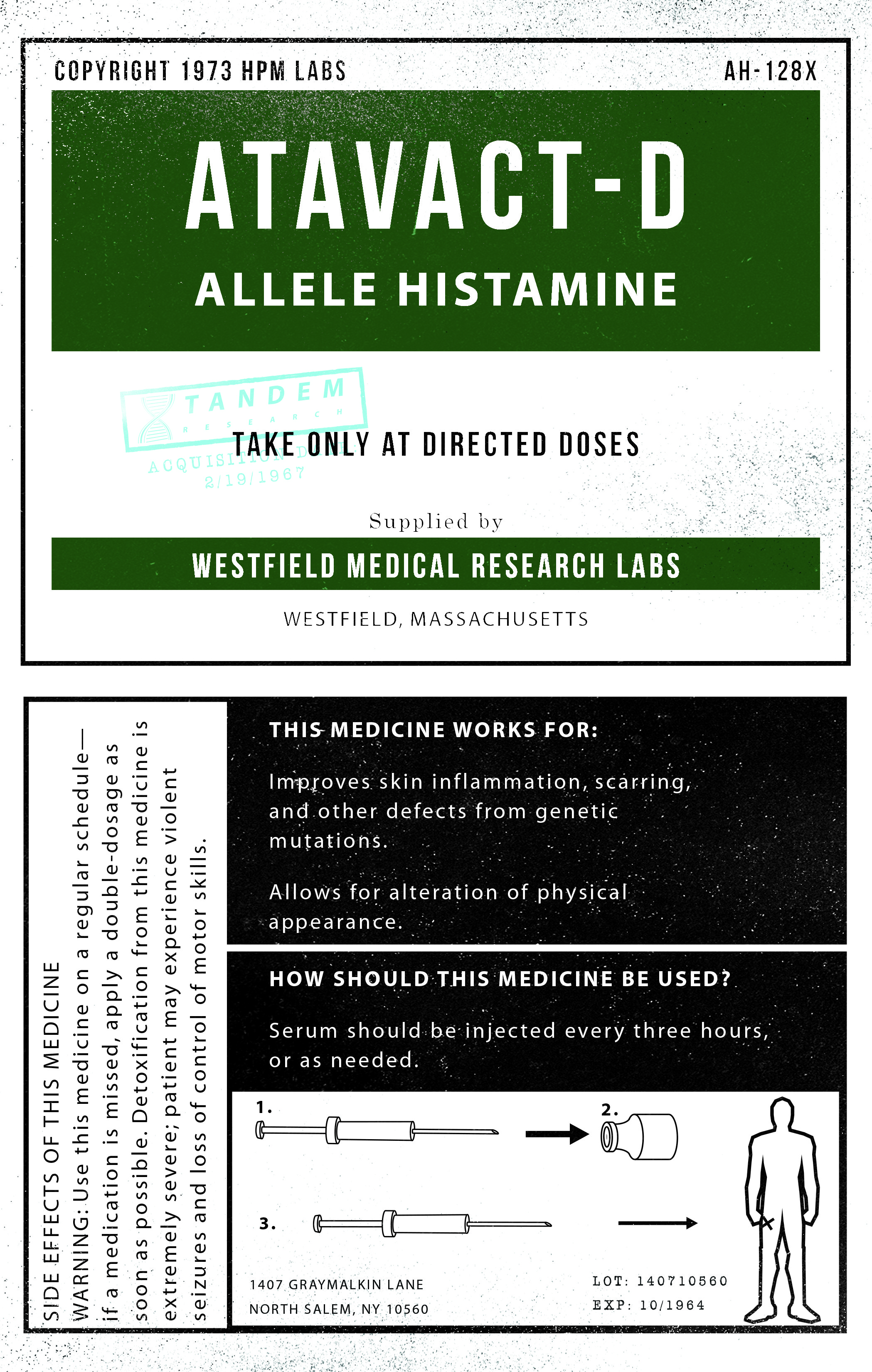 This image discusses a treatment derived from Ted Kennedy's bone marrow, which can be used to help JFK's facial scarring.

Found this archive in the Tandem’s Ted Kennedy files—it’s a letter to Jackie Onassis from TK about a doctor developing a serum from his bone marrow. The serum has healing properties that can help John F. Kennedy Jr’s apparent facial scarring… 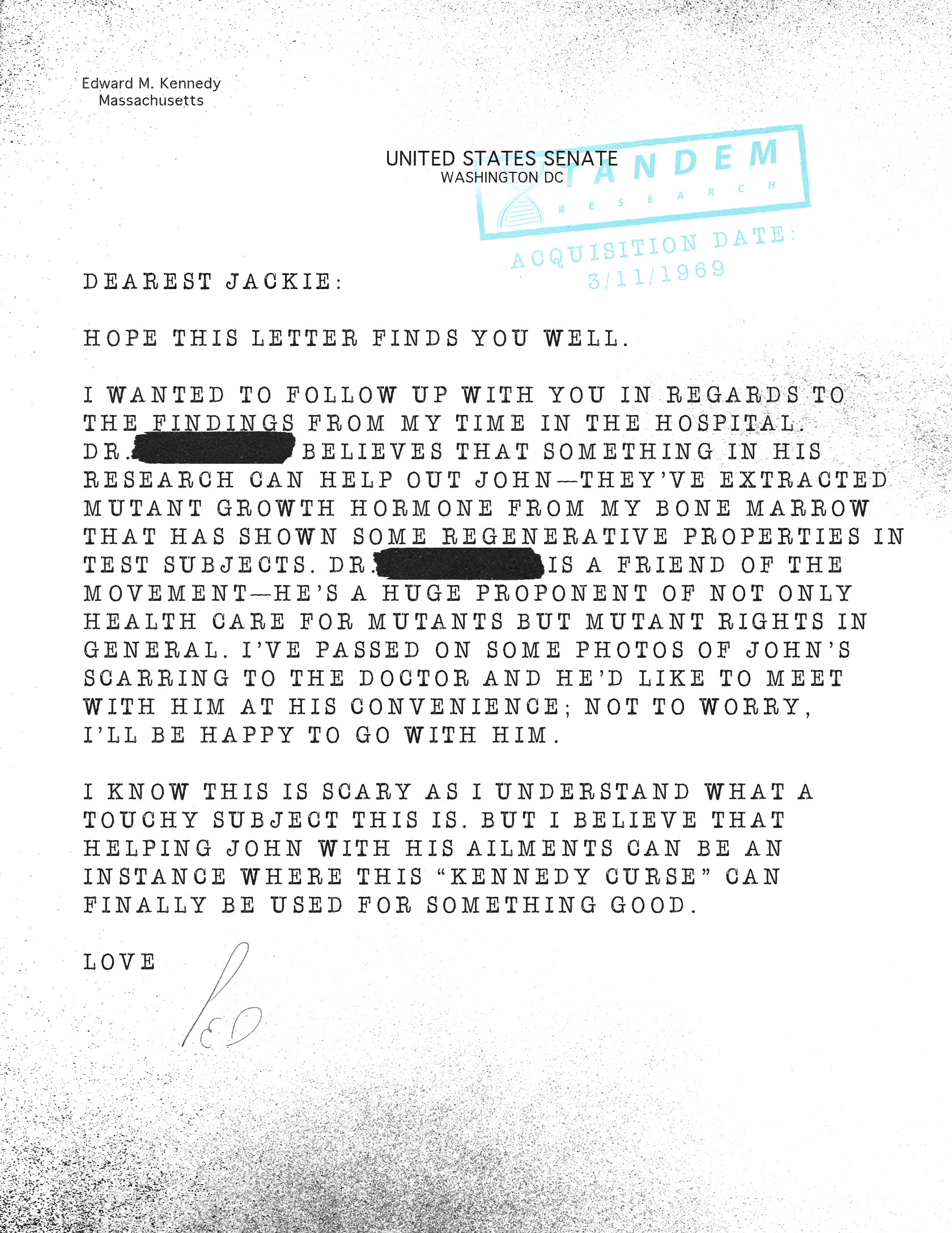 The last one of note is this letter which discusses Jackie's concerns about the side effects and JFK's exposure as a mutant. If his mutation was purely psychic/telepathic in nature, there would likely be less concern about a sudden exposure. 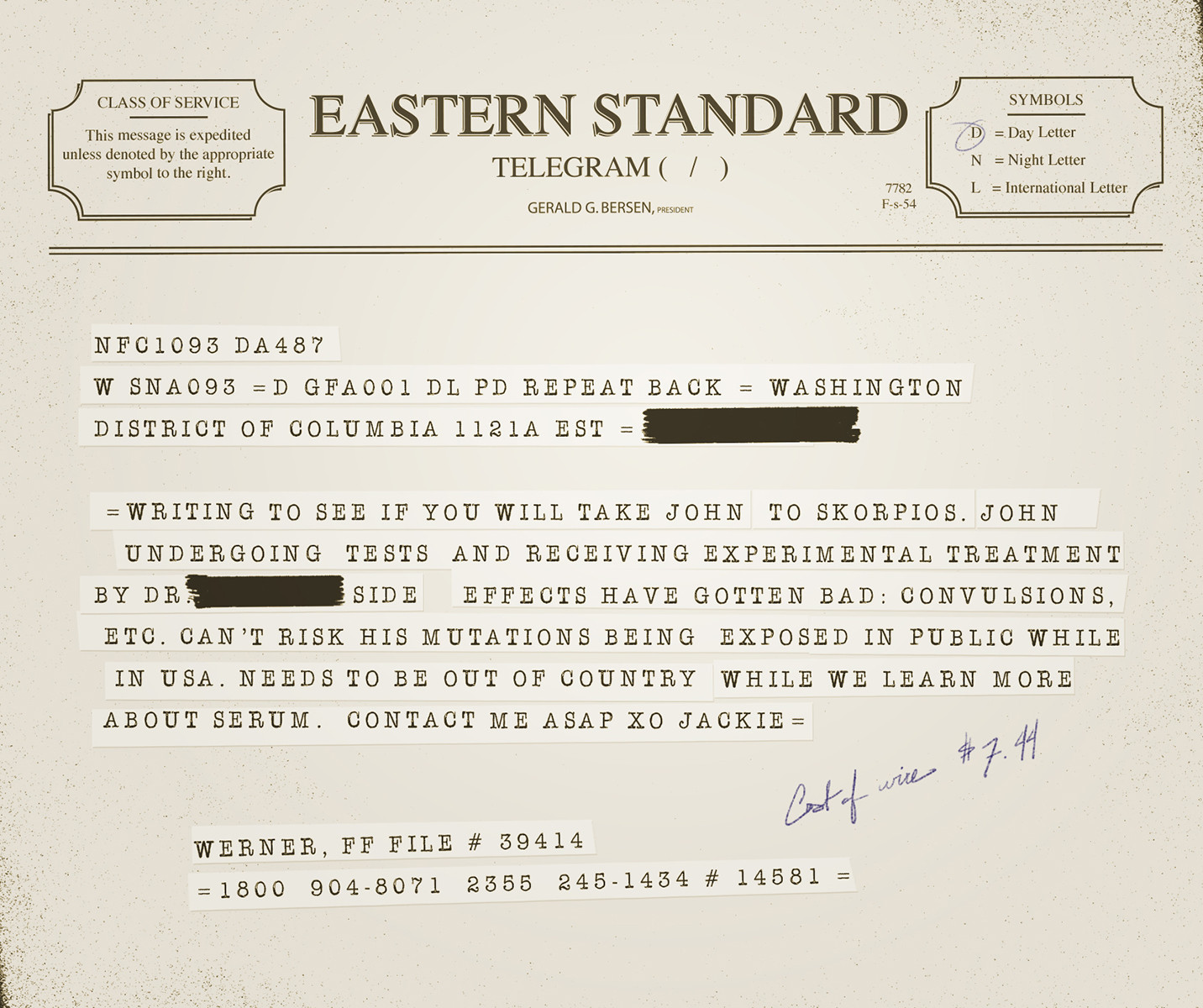 What about the comics?

There are currently no Marvel Universe realities where JFK has been identified as a mutant, though he does show up as a zombie, along with every other dead US president within Earth-616 in Deadpool #3. In this story, their powers and abilities were granted via magic when they were raised by a necromancer. No X-Genes were involved.

It should be noted that while the tie-in ARG/Viral sites are officially sanctioned, some of these sites have information that is not 100% fully canonical by the time movies are released. This particular set of images is new, and seems to contradict Kinberg's envisioned mutation. Which is the real one? It may never be officially 100% confirmed, but both statements from the writer and the official ARG confirm that in the X-Men movie universe, JFK was a mutant.

7
Do Wolverine's opponents bleed (and leave blood on the claws) in comics?
3
Is Jean Grey the only person Toad has slimed?
12
Does Rogue ever take advantage of the removable power suppression we see?
8
Does Men in Black belong in any Marvel canon?
11
Is Thanos a Mutant among Titans?
20
Where can I read the full version of "The Bent Bullet Report", an immersive article used in the promotion of "X-Men: Days of Future Past"?
5
In which movie did Magneto kill the president as stated in X-Men: Days of Future Past?
3
Is there anything more than meets the eye in the last scene of "Dark Phoenix"?