I'm curious if these two extremely notable Star Wars characters can speak Huttese. Would a conversation with Jabba be possible? Has this been shown?

WATTO and ANAKIN are in the middle of an animated discussion in Huttese.

That's a "yes" for Anakin then, but I'm not aware of any evidence in the movies for Yoda.

Vader certainly spoke Huttese back when he was a child, as detailed in this answer. This is also borne out in the novelization of The Phantom Menace, which, though no longer fully canon, does provide further confirmation that Anakin and Watto were speaking Huttese in that scene:

“Patta go bolla!” he shouted in Huttese, chubby body jerking with the force of his words.

The boy blinked, but held his ground. “No batta!”

“Peedunkel!” Watto flitted backward and forward, up and down, everything moving at once.

As such, a conversation between Vader and Jabba would not only be possible, but has in fact happened (in the Darth Vader comic series): 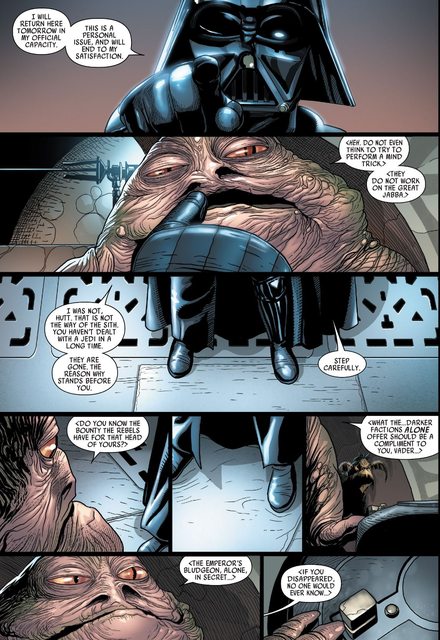 The angular braces around Jabba’s dialogue indicates that he is speaking in Huttese. Vader shows no difficulty understanding it, but (judging from the lack of braces around his dialogue) is conversing in Galactic Basic. Thus we see that Vader, as opposed to Anakin, still understands Huttese, and has not forgotten it since he was a child.

I suspect that Huttese has negative associations for him, seeing as it was the language spoken when he was a slave in Hutt-controlled territory. Speaking Basic may also be a way of asserting his power—he is not obligated to speak Jabba’s language. Of course, this sort of mutual passive bilingualism is the norm in Star Wars, so perhaps it requires no explanation.

We have no evidence that Yoda speaks Huttese. However, he has been alive for nine hundred years in a highly multilingual galaxy, and Huttese is a common trade language. It seems likely that he at least understands Huttese, and possibly speak it.

10
Is there a Huttese Sound Archive online?
38
Why does C-3PO speak to Jabba in Basic/English?
28
How does Yoda know that the name of other Sith is Darth Sidious?
6
What language does Neri from “Ocean Girl” speak?
8
Are any Star Wars languages fully developed and learnable?
28
Are there other characters in the Star Wars universe who had damaged bodies and needed to wear an outfit like Darth Vader?
15
How developed is Huttese?
10
Can Droidekas speak?