How and when did Azog get his arm back?

I've read The Hobbit a number of times, but not recently. I just saw the first film, "An Unexpected Journey", last night.

In a flashback, Thorin cleaves Azog's arm off . This doesn't seem familiar from the book, but perhaps my memory isn't so good. Later in the film, Azog seems to have an arm again. Did I miss something?

This is really two questions, but I'll try to answer them both.

Why don't I remember reading about Azog losing his arm?

Azog does not appear in the book, although he is mentioned by name in chapter one, An Unexpected Party:

Gandalf: Your grandfather Thrór was killed, you remember, in the Mines of Moria by Azog the Goblin.
Thorin: Curse his name, yes.

The incident Gandalf's referring to is called the War of the Dwarves and Orcs1, and it's described in Appendix A: Annals of the Kings and Rulers, part III "Durin's Folk".

The war is precipitated by a slightly-crazy Thrór who, desperate to reclaim some wealth and status after being driven out of Erebor, wandered into orc-infested Moria. In response Azog, self-proclaimed master of Moria, sent back Thrór's head with "AZOG" branded on the brow.

The resulting war, the War of of the Dwarves and Orcs, lasted for nine bloody years. The decisive battle was the Battle of Azanulbizar, which is the battle that An Unexpected Journey dramatizes. The battle is adapted pretty faithfully; this was the battle where Thorin earned the name Oakenshield, for instance, and it does take place outside the Eastern entrance to Moria2.

One main difference, the death of Thrór, does in fact have some precedent in the text:

Soon Náin made a great stroke with all his strength that remained, but Azog darted aside and kicked Náin's leg, so that the mattock splintered on the stone where he had stoo, but Náin stumbled forward. Then Azog with a swift swing hewed his neck. His mail-collar withstood the edge, but so heavy was the blow that Náin's neck was broken and he fell.

Then Azog laughed, and he lifted up his head to let forth a great yell of triumph

With some fairly minor differences, and a different murdered character, this is very similar to Thrór's death-scene in the film version. It even has a similar effect for Azog, though much more drastic:

Up the steps after him leaped a Dwarf with a red axe. It was Dáin Ironfoot3, Náin's son. Right before the doors [to Moria] he caught Azog, and there he slew him, and hewed off his head.

So despite some differences, it's reproduced largely faithfully.

What happened to Azog's arm, anyway?

Here's a picture from (I believe - it's a Google find) Desolation of Smaug, that shows the result:

In this image, we can just make out that Azog's left arm has been replaced by a "prosthesis" (Read: a big metal hook). We don't have any information about when this happened, but it was obviously after the Battle of Azanulbizar. It doesn't seem like a stretch to say that this is the Orc's attempt to treat their captain's injury. May the Valar bless the unfortunate Orc who got stuck with that task.

This promotional statue of Azog from SDCC (Courtesy of theonering.net) gives a better view of the arm 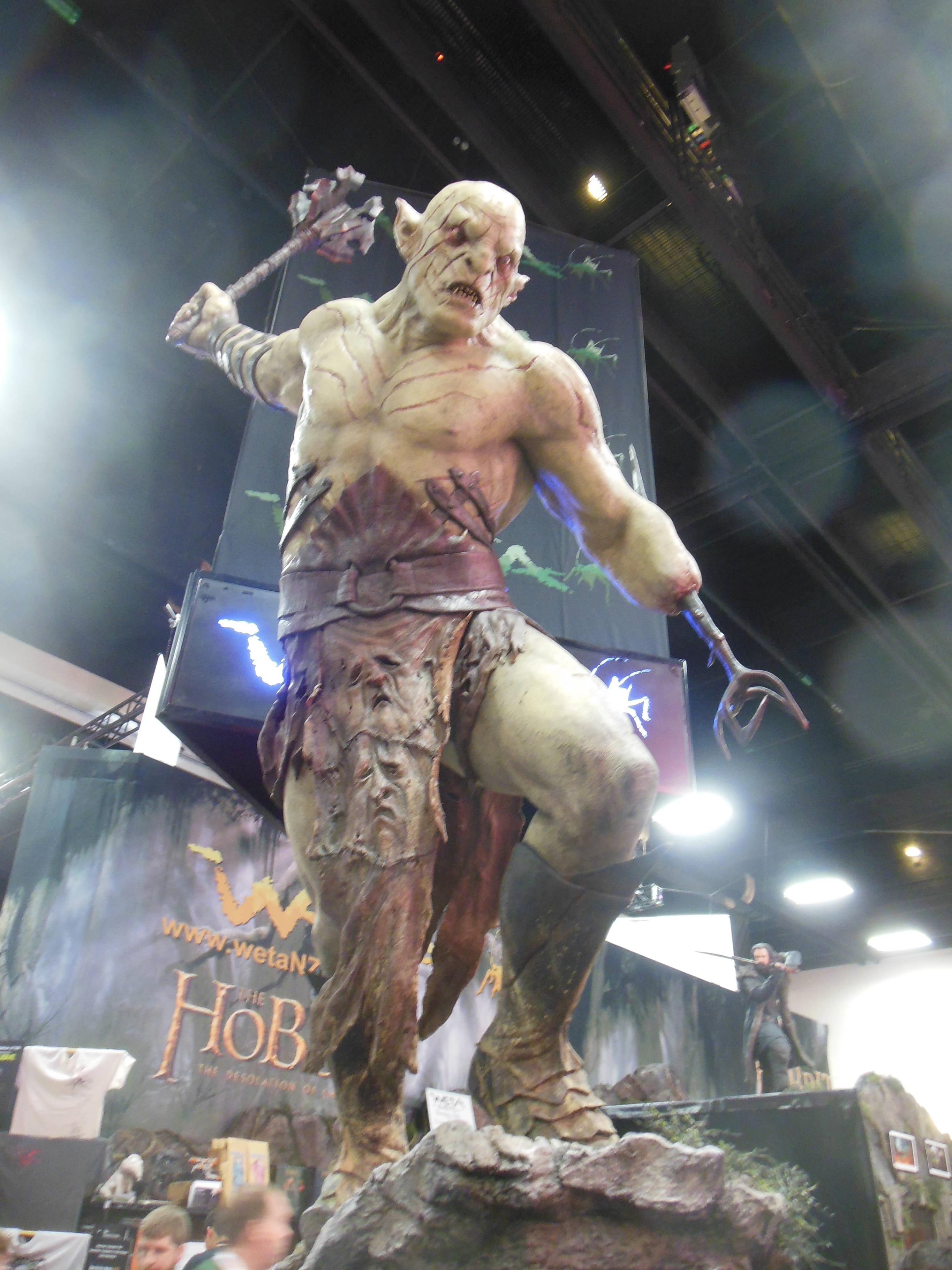 What's more, it seems that Azog 2.0 comes with replaceable limbs. In The Battle of the Five Armies, he's sporting a nifty sword-arm (by which I mean he has a giant, sharp piece of metal jabbed through his stump4): 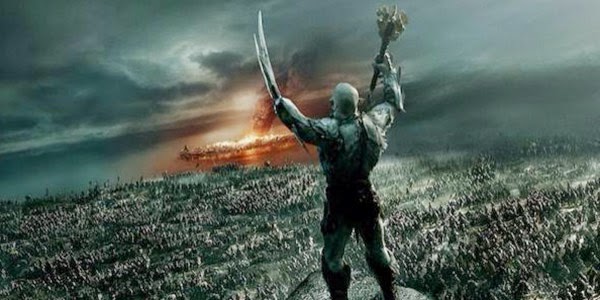 1 Because historians are so good at naming things5

3 Billy Connolly's character in The Battle of the Five Armies

4 If he had been born today, I get the feeling that Azog would be really into bod-modding.

The battle was the climax of a long war started when Azog killed Thror at the gates of Moria and the 7 clans of dwarves banded together to avenge him.

The movie is an almost total fabrication.

However I believe that Azog had a spike in place of his arm later in the film!

Not the answer you're looking for? Browse other questions tagged tolkiens-legendarium the-hobbit an-unexpected-journey or ask your own question.

61
Was Gimli the last of his race?
88
Are orcs and goblins really the same thing?
46
What did Bilbo Baggins do while the Fellowship of the Ring went on their quest?
16
When exactly did Saruman start working for Sauron?
8
Did Peter Jackson deliberately introduce the cinematic dichotomous use of light in 'The Desolation of Smaug'?
2
Why don't any characters sing in the 2nd and 3rd Hobbit films?
28
Why does Bilbo try to hide his job when presenting the contract as evidence of his identity?
11
Why is Azog the Defiler sworn to wipe out the line of Durin in Peter Jackson's The Hobbit movies?