What is the origin of the name “Bolo”?

What is the origin of the name "Bolo"? Is it an acronym or abbreviation for a longer word? Is it based on a term used in real life (perhaps by the military)?

A Bolo Knife is a heavy machete-like long single-edged knife, originally of Filipino origin. During the U.S. occupation of the Philipines in the early 20th century the American military adopted it and made their own version.

Originally used as an all-purpose agricultural tool, it's also good for close combat.

Between the Crimean war and WWI caterpillar-tread tractors were used in farming. This connection from agriculture to military may be what inspired Keith Laumer to use the name for his autonomous BOLO tanks.

I've looked through the "Brief Technical History" and the "Brief History" appendices in BOLO! and The Compleat BOLO, and I don't see any mention of why the name 'BOLO' was used.

The successor to the Main Battle Tank which was limited to Direct Fire in the Close Support Role. The Bolo was developed with the upgrading of the Indirect Fire, Active Protection, Electronic and Cyber-Warfare capabilities to that same "Close Support" role. The main battle tank fulfills the role the British had once called the 'universal tank', filling almost all ground battlefield roles. The Bolo fulfills ALL ground battlefield roles.

Prior to the Mark XIV, early Bolo Marks utilized projectile weapons for their main battery. All marks of Bolos are equipped with a set of secondary batteries such as rapid-fire mortars and heavy howitzers. In artillery, a chain-shot is an obsolete type of naval ammunition formed of two sub-caliber balls, or half-balls, chained together. They were used in naval warfare in the age of sailing ships and black powder cannons to shoot masts, or to cut the shrouds and any other rigging of a target ship. In modern times, the effect is replicated in shotguns with the use of bolo shells, consisting of two slugs joined by steel wire. When fired, the slugs stretch the connecting wire, causing it to slice up its target badly when it hits. They are banned in several jurisdictions, including Florida and Illinois. 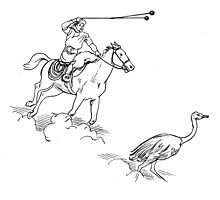 A Bolas is a throwing weapon. IMO, where the B-18 (long range bomber) got its name from. (bola being Spanish for 'ball', is also the etymology of Bolo ties)

If in the army one was unable to qualify on rifle use, one was said to "bolo"! It was a reference to the Philippine broad knife used in combat. "Can't hit the enemy with a rifle? Here's your knife."

An insult and badge of temporary dishonor or inability to qualify as a fully trained soldier. (1967+ use in army basic training.)

Not the answer you're looking for? Browse other questions tagged names bolo-universe or ask your own question.