Who is the huge soldier among Zod's retinue in Man of Steel?

In Man of Steel, when Zod attacks the Council, we get a glimpse on some of his soldiers. One of them, seems to be a physically huge guy (I don't think it is a matter of perspective in the screen) 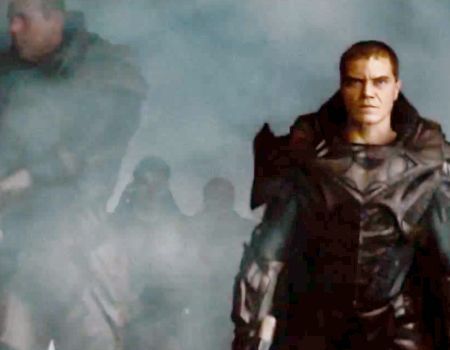 It called my attention due to his size, but I'm not that familiar with the Superman mythos. Is he supposed to be any of the well known kryptonian enemies of Superman (Non, Quex-Ul, etc.)?

Nam-Ek was born on the distant planet Krypton as a genetically engineered soldier without a speaking ability, later joining the ranks of Krypton's Military under the leadership of General Zod whom Nam-Ek answered only to. Nam-Ek was a test subject of a test to mix the DNA of Kryptonians and animals know as Randor. The test caused Nam-Ek to grow multiple feet taller and develop superhuman strength even while in Krypton's environment.

It is also my understanding he is completely CGI in the movie, can't confirm it though.

This could also be Tor-An, a large Kryptonian played by stuntman Richard Cetrone. He can be seen without his helmet in a couple of scenes, and is a fairly tall guy (6'4"). If it IS Cetrone, obviously his height was enhanced with CGI in post-production.

Here is his first appearance, when Zod lands on Jor-El's landing pad during the Krypton battle. That's him in the center background:

He can be seen again briefly when Zod is exploring the Kryptonian colony world:

Cetrone is probably known to most genre fans as "Pierce" in the Underworld franchise. He was also the stunt-double for Tony Stark in Iron Man, as well as the stunt double for Ben Affleck in the upcoming "Batman vs. Superman: Dawn of Justice". While looking this up, I learned he was also the lead antagonist (Big Daddy Mars) in "Ghosts of Mars" as well as the Merman (AND the Werewolf) in "Cabin in the Woods". So even if the big guy isn't Tor-An, it may still be Cetrone doing the motion capture work for the character.

Not the answer you're looking for? Browse other questions tagged dc superman character-identification dc-extended-universe man-of-steel or ask your own question.

7
In Man of Steel, how did the phantom drive create the singularity?
19
In “Man of Steel”, how did Superman get his super-suit?
17
Why aren’t the Kryptonians powerless in their biosuits in Man of Steel?
13
Floating glove scene in Man of Steel. What does it mean?
8
Did the World Engine from ‘Man of Steel’ appear in Superman comic books?
1
Does having the Codex inside him make Superman stronger in Man of Steel?
6
Was Zod's house symbol in Man of Steel inspired by the one from “Red Son”?
2
In the 2013 movie Man of Steel why doesn't Jor-El simply cripple or destroy General Zod's ship?