How do ejection systems operate for Rebel pilots?

Rebel flight suits include an ejection harness, Biggs tells Porkins to eject. This seems to suggest that Rebel fighters have an ejection system.

How would they operate for different fighters? Does the whole cockpit separate? Do they function like current aircraft ejection systems - if so what protects the pilot from the vacuum of space?

It pains me to use this as a reference, but the Star Wars Holiday Special contains a scene where, after crash landing in a Y-Wing on a planet, C3PO and Luke are attacked by a monster. Luke ejects the cockpit from the ship. The ejection launches the entire cabin from the rest of the chassis.

Other ships used by the Rebellion/New Republic were also able to eject their cockpits: the B-wing and K-wing were capable of separating their cockpit for pilot safety.

A similar ejection mechanism may exist for the X-wing, where the entire cockpit is ejected. I can't find canon to support this notion aside from Biggs' quote and the ejection harness, though. Below is a cross section of an X-wing, which does not show any ejection mechanism. 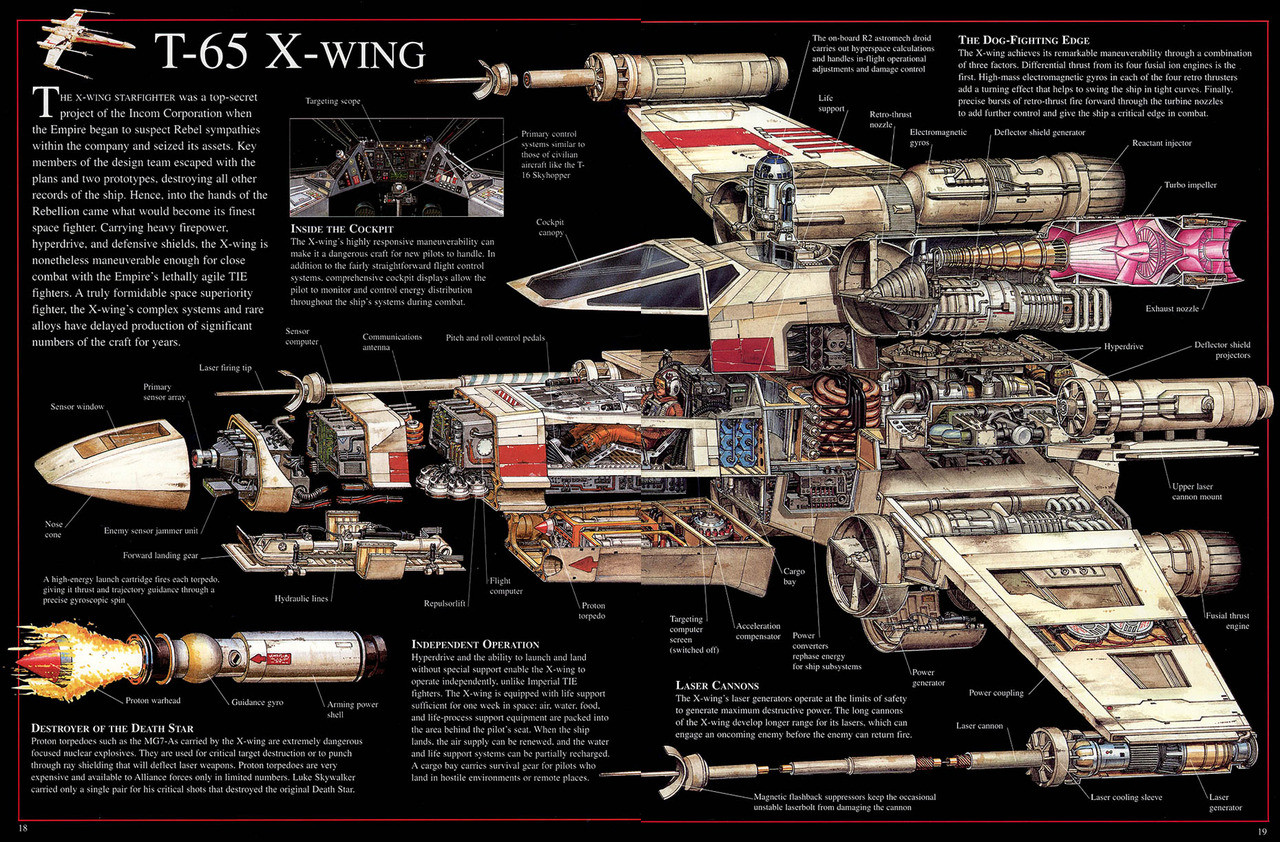 According to this picture from the now-Legends comic X-Wing Rogue Squadron 21: In the Empire's Service, Part 1, showing Derek "Hobbie" Klivian of Rogue Squadron ejecting from his crashing X-wing, it seems that X-wing ejector seats worked similarly to those of real-world fighter aircraft: The canopy detaches from the fighter and the pilot's chair is propelled straight upwards so the pilot clears the craft. Neither the fighter's console nor the controls appear to have been ejected along with the seat, and the pilot/seat is protected by a small magnetic field/deflector shield. 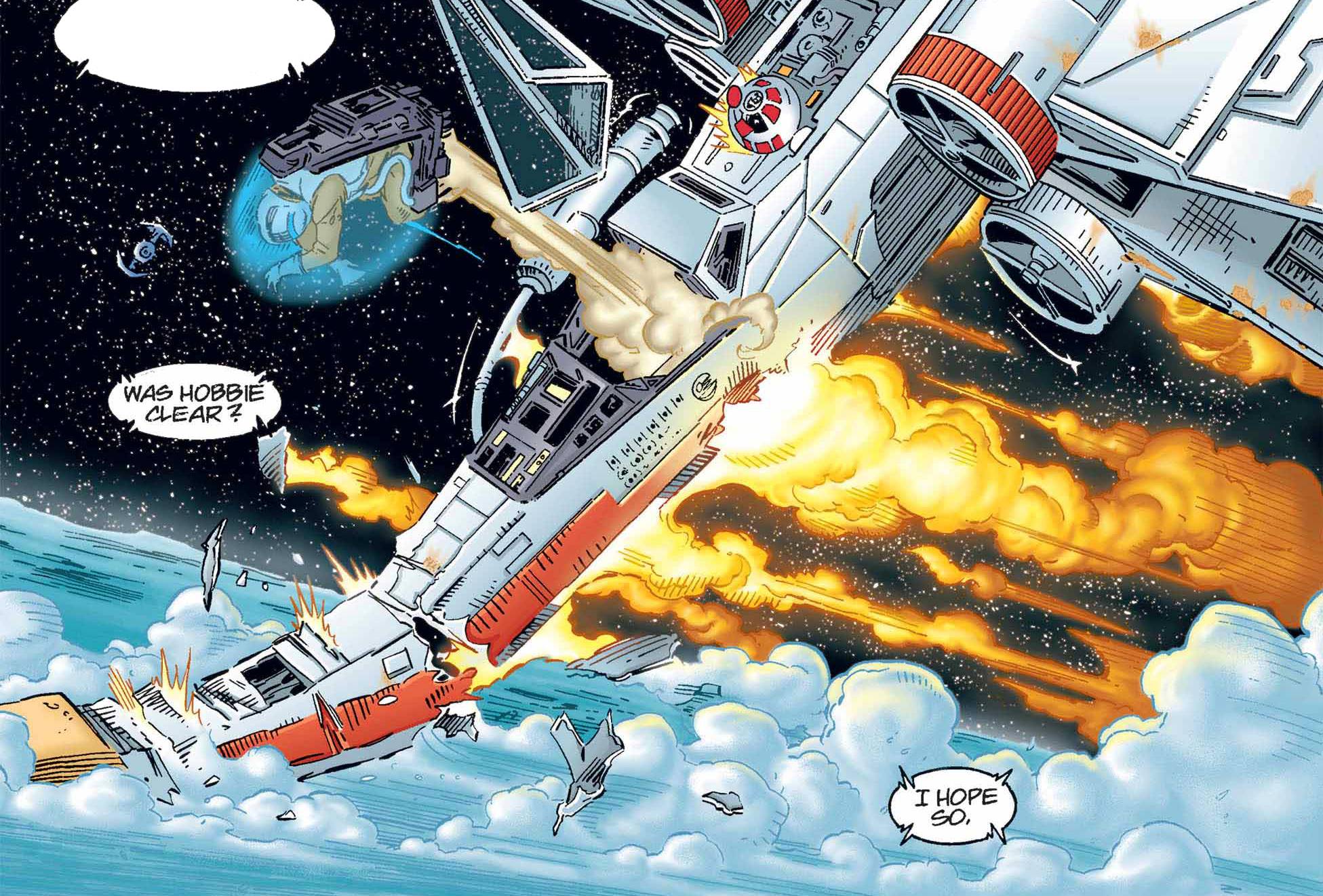 However, it should be noted that compared to the depiction of the X-wing pilot's chair in the Incredible Cross Sections book, there is a particular difference.

The X-Wing Rogue Squadron panel shows the pilot as seated almost completely vertically, with his chair elevated enough for his feet to be drawn against it and kept out of the way when the chair ejects, not unlike this real-world F-16 Fighting Falcon's ejector seat: 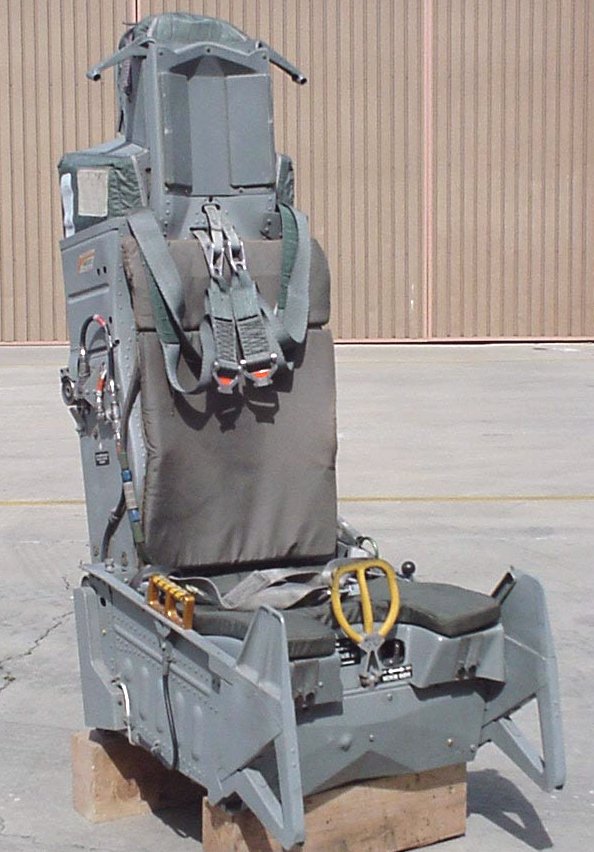 Comparatively, the X-wing cross section shows the pilot in a much more reclined position with no way to draw his legs against his chair. Indeed, the pilot's chair is completely different from the comic panel's depiction and is merely a seat rather than a self-contained ejection unit and there is no apparent way that it could be used to eject from the starfighter.

It should be noted that the X-wing series of novels appear to treat ejector seats the same way that the comic does, since at least one novel refers to starfighter pilot chairs/ejector seats being used as stopgap furnishings for living quarters. The Incredible Cross Sections depiction seems unlikely to be able to be used in that respect.

In reality, unlikely the props builders in 1975 thought about that detail. Wardrobe would have looked through aviation references and decided that most military pilots wear harnesses, and they had some in stock, so....

In-universe, the fighters they use have atmospheric capabilities (wings, pointy nose etc.) so a regular parachute will work fine there. If the whole capsule ejects in space the harness can also be used to hold you in - you don't wear a harness over a harness. Then you just float around until someone picks you up. Or blows you up, depending on who they are. Or your air runs out.

10
Why did Biggs tell Porkins to eject during the Battle of Yavin?
43
Whose helmet did Rey put on?
12
Can I bail out of my Imperial starfighter?
1
How is the vacuum of Star Wars space different from that of the Milky Way?

37
How did the Rebel Alliance survive at Endor?
23
How did Han Solo become a rebel?
15
Are Rebel pilots trained to conduct suicide runs?
4
How many systems are there in the Galaxy far far away?
11
How many systems were part of the Republic?
5
How does the Force interact with holographic displays/computer systems?
15
Who are all these rebel pilots?
6
Who were the 30 Rebel pilots who fought for the Alliance during the Battle of Yavin?
5
How long did it take for the Rebel fleet to reach Endor (from Sullust)?