Do Daenerys’ dragons have names, and how does she tell them apart?

I’ve watched the whole of Game of Thrones (I haven't read the books yet) and there was so little information about the three dragons.

Do they have names, gender? And how does Daenerys (the Khaleesi) distinguish them?

Their names are Drogon, Viserion, and Rhaegal. Named after her husband and her two brothers. Drogon is black, Viserion white, and Rhaegal green. They're all referred to as male in the books.

Edit: Now that I think about it, they are referred to as male in the books, but the story is told as a point of view, so it's entirely possible one or more of them is female. It's not like Lizards are easily identified. Especially when they've been extinct for more than a generation.

Each of her dragons have their own names yes, each one named after someone she has lost. This is the passage in which she names them:

"It may be as you say, blood of my blood," Dany replied gravely, "but he shall have a new name for this new life. I would name them all for those the gods have taken. The green one shall be Rhaegal, for my valiant brother who died on the green banks of the Trident. The cream-and-gold I call Viserion. Viserys was cruel and weak and frightened, yet he was my brother still. His dragon will do what he could not."
"And the black beast?" asked Ser Jorah Mormont.
"The black," she said, "is Drogon."
A Clash of Kings, Daenerys I

"Aegon's dragons were named for the gods of Old Valyria," she told her bloodriders one morning after a long night's journey. "Visenya's dragon was Vhagar, Rhaenys had Meraxes, and Aegon rode Balerion, the Black Dread. It was said that Vhagar's breath was so hot that it could melt a knight's armor and cook the man inside, that Meraxes swallowed horses whole, and Balerion . . . his fire was as black as his scales, his wings so vast that whole towns were swallowed up in their shadow when he passed overhead."
The Dothraki looked at her hatchlings uneasily. The largest of her three was shiny black, his scales slashed with streaks of vivid scarlet to match his wings and horns. "Khaleesi," Aggo murmured, "there sits Balerion, come again."
A Clash of Kings, Daenerys I

The passage doesn't state who Drogon is named after but I think it is safe to assume it is after Khal Drogo her late husband.

The show also has the following depictions of each of the dragons:

Note that as of Season 7 Episode 6, "Beyond the Wall", there's an even easier way to tell Viserion apart from the others: 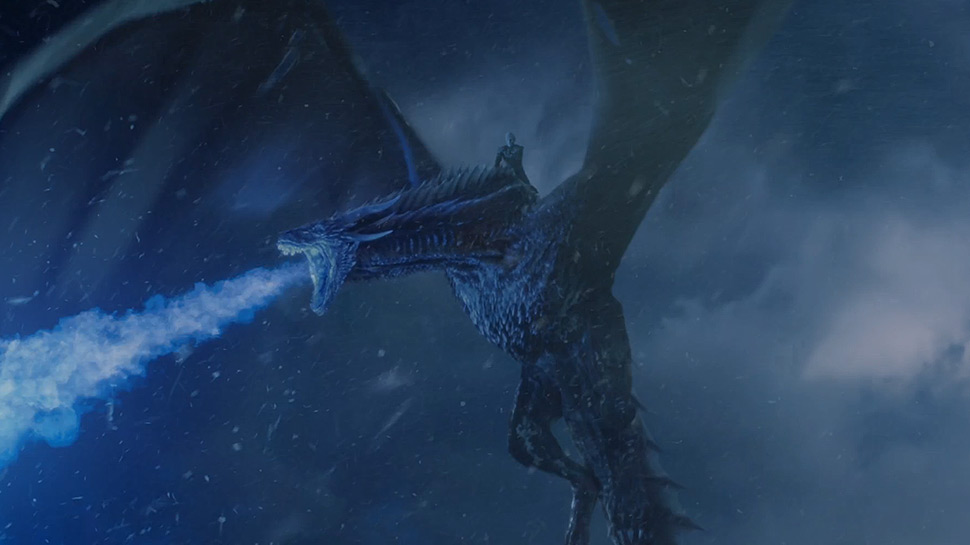 14
How long does it take for dragons to grow?
42
Reading order of “A Song of Ice and Fire”
13
Do eunuchs have something distinctive so people can tell them apart?
10
Where does Daenerys keep her dragons?
11
What methods to reproduce/copy books are available in the world of Game of Thrones / ASOIAF?
7
Why did Daenerys lock her dragons up and not interact with them at all?
11
Why are there no other dragons in ASOIAF?
18
Was Balerion three thousand or two hundred years old?
8
Why is Daenerys Targaryen called the “Mother of Dragons”?