I'm starting to read DC comic books but I don't know where to start.

It's pretty easy with Marvel thanks to Marvel Platinum series but I can't seem to find something like that but for DC.

Is there a definitive (e.g. non-subjective) answer to question of which are the most important comics and story-arcs? Something suggested by the publishers or authors or the experts?

You might want to consider getting hold of a copy of the "DC Entertainment Essential Graphic Novels and Chronology". This book details the comics that DC thinks are most important as well as listing "essential" back-catalogue items for DC's main properties; Superman, Batman, Green Lantern, The Flash, Justice League, Wonder Woman, Green Arrow, Justice Society of America, Legion of Superheroes and the Teen Titans.

Most of their 'essential' stories have been marketed under the "Greatest Stories Ever Told" banner. You certainly couldn't go wrong reading those. 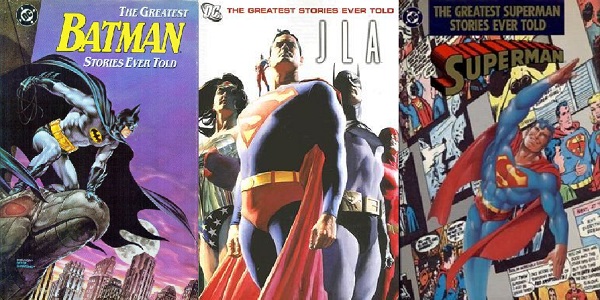 If you're more interested in the previous continuity that occurred for most of the 2000's, here are some recommendations for that version of the Justice League:

Trade paperbacks are collected editions of popular story arcs, so it's a great way to catch up on major plotlines. The downside is that they don't always include every issue and therefore might have some missing gaps.

If you want character-specific titles or something else entirely, I would recommend going to Amazon (or your preferred online retailer) and search for the name of the character you want and the acronym TPB (ex - "Batman TPB"). On Amazon, you can also include the search term "New 52" to look for items specific to that continuity. You generally want to look for titles like "Batman: Volume 1" when looking for the core stories.

Alternatively, if you just want to catch up on the whole New 52 thing, I also recommend the following animated films:

Not the answer you're looking for? Browse other questions tagged comics dc suggested-order or ask your own question.

21
Where to start if I want to get into certain DC comics?
2
What's the perfect place to start reading DC comics for a newbie?

21
Where to start if I want to get into certain DC comics?
14
The New 52: What Titles Don't Mix Continuity For New Reader?
26
Who is the first minority superhero in mainstream US superhero comics?
9
Where to start with Guardians of the Galaxy?
3
What reading order would get a comic newbie into Superman Rebirth?