I remember reading this novel over fifteen years ago, but I cannot recall the title or the author. I think it might possibly have been published sometime from 70s to 90s. What I recall of the cover was that it prominently featured the pointy-eared, tailed protagonist in a stereotypical space opera pose, shirtless and holding a gun. I don't remember if they were actually described like that in the text itself. They might have been cat people or something else, but definitely had tails.

IIRC, The basic plot is that humans have established relations with these aliens by building a space port on their home world. The protagonist is the son of two scientists who are killed in an explosion during a demonstration of practical mind reading technology. There are a few murders, which the protagonist experiences committing through clairvoyant dreams due to a telepathic connection with the killer. The explosion is discovered to be deliberate sabotage. At the climax the killer is revealed to be the protagonist's human girlfriend, who turns out to be a shape shifting alien who sabotaged the technology to keep its secret.

Any possibility you're thinking of Venus on the Half Shell? This book allegedly by prolific sci-fi writer-Kilgore Trout, featured in many Kurt Vonnegut novels, was ghost-written by Philip Jose Farmer. It features a race of humanoids with tails, which were used with great skill during...personal moments.

The Alien Trace by H.M. Major. H.M. Major was a pseudonym for Kathleen Buckley and Sharon Jarvis. 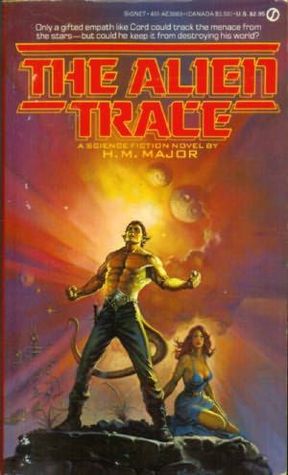 Not the answer you're looking for? Browse other questions tagged story-identification novel telepathy shape-shifter detective or ask your own question.