In DCAU / Batman Beyond, what happened to "Silver" and why was Batman working alone during that time?

During the DCAU cartoon series Batman Beyond, we hear mention of Dick Grayson, the ex-Nightwing and how he and Bruce have not been on speaking terms for many years.

In the 2011 comic book continuation (Batman Beyond Vol 3) by Adam Beechen, Nightwing shares that:

The Joker had kidnapped Alfred and when Dick and Bruce went to the rescue, Dick got riddled with bullets, due to Batman being unused to working with a partner for "years". The incident left him Nick Furyesque in the eye but also left a bullet stuck near his spine.

The situation leading to the incident is portrayed in the below flashback.

Dick: He'd been alone so long--since what happened to Silver-- and he hadn't worked with a partner in years.

Joker being the perp here, means this is clearly before the flashback parts of Return of the Joker, so by all accounts Batman should be working with Batgirl and Robin II (Tim) at least somewhat regularly during this time. And Silver is name-dropped significantly but the only Silver that seems to crop up in a DCAU context is Silver Banshee - a minor JLU villain with no connections to Batman.

So who/what is Silver and what is the incident being referred to here? Why is Batman 'alone' during this time period? 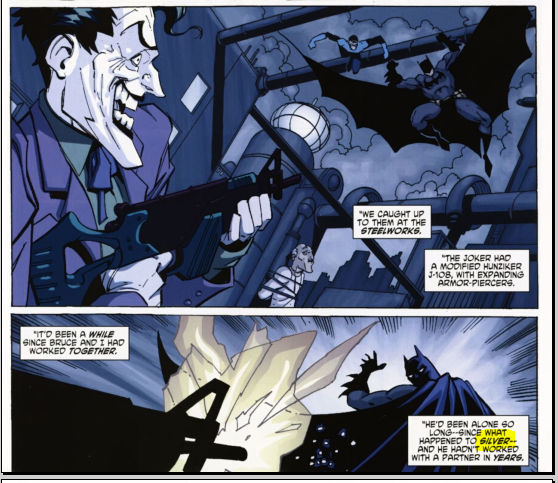 She is Silver st. Cloud one of the many love interest of Bruce Wayne. She debuted in Detective Comics #470, written by Steve Englehart (Englehart's and Roger's Batman has been referred that one of the best Batman arcs ever).

About what happened to her, you can learn from DC's wiki that:

Silver and Wayne rekindled their relationship after Gregory's death. Silver understood Wayne's responsibilities as Batman and was more than content to have him during daytime while Gotham had him at night. Wayne seriously considered giving up the mantle and settling with Silver for good, especially since a new vigilante, Baphomet, had turned up and impressed both Batman and Robin with his crime-fighting abilities. Wayne finally proposed to Silver and invited Baphomet to his Batcave to formally introduce himself and Silver to Baphomet. However, Baphomet then revealed himself as the villain Onomatopoeia and instantly slit Silver's throat.

Batman is "alone" after that period, presumably because, after losing again somebody he was close to and loved, he wouldn't want to expose himself to lose somebody else (like a sidekick or ally), he was full of rage and would be really difficult to work with. For example, in Frank's Miller The Dark Knight Returns

is hinted that Bruce and Dick grow apart after the death of Jason (even though this story was written before A Death in the Family...)

IMO, there is no plausible answer or explanation that would connect this event to The Return of the Joker cartoon movie. This event Silver is involved into seems to be just an ad hoc creation to justify what happened that brought the main characters of the series (Bruce and Dick) apart.

Not the answer you're looking for? Browse other questions tagged dc batman dc-animated-universe batman-beyond or ask your own question.

23
How does Bane know Bruce is the Batman?
7
Is the Teen Titans Robin Tim Drake or Dick Grayson?
18
Who are these Bat-family members?
5
Could Green Lantern: The Animated Series be considered part of the DCAU?
1
What is the source of this information about Batman Beyond and DCAU?
9
Has Bruce Wayne ever impersonated Nightwing?
2
Are the Batman Beyond 2.0 comics part of the DCAU?
9
Are there any other examples of a Batman - Batgirl relationship besides the one given in "The Killing Joke Movie"