What is it about a specific broomstick that makes one better than another?

What makes one better from the other? 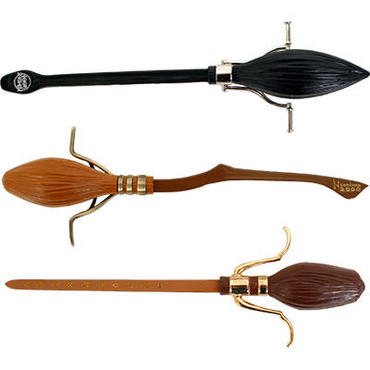 Speed, Comfort, Handling, Other little bells and whistles. All done by magic.

I'm sure there are more mentions of this in the books, but here is what I found so far:

Several boys of about Harry's age had their noses pressed against a window with broomsticks in it. "Look," Harry heard one of them say, "the new Nimbus Two Thousand -- fastest ever --"

It's compared to Ron's old slow broom in the next book:

Harry Potter and the Chamber of Secrets (ch. 4)

Then, when the Nimbus 2001 one comes out, Malfoy's father gets them for the whole Slytherin Quidditch.

He was nervous, mainly at the thought of what Wood would say if Gryffindor lost, but also at the idea of facing a team mounted on the fastest racing brooms gold could buy.

"All right there, Scarhead?" yelled Malfoy, shooting underneath him as though to show off the speed of his broom.

Harry Potter and the Chamber of Secrets (ch. 10)

Too eager to fly again to wait for Wood, Harry mounted his broomstick and kicked off from the ground. What a feeling -- he swooped in and out of the goal posts and then sped up and down the field. The Nimbus Two Thousand turned wherever he wanted at his lightest touch.

Also, in the book Quidditch Through The Ages, it talks a lot about the different broomsticks.

As wizarding families in those days made their own brooms, there was enormous variation in the speed, comfort and handling of the transport available to them.

... broomsticks were sufficiently advanced to allow fliers to turn corners and vary their speed and height...

Comfort was a big deal as well. The brooms range from this:

A German illuminated manuscript of this period shows three warlocks dismounting from their brooms with looks of exquisite discomfort on their faces. Guthrie Lochrin, a Scottish wizard writing in 1107, spoke of the “splinter- filled buttocks and bulging piles” he suffered after a short broom ride from Montrose to Arbroath

to the newer models:

There are also many other small details,

all mentioned in Quidditch Through The Ages (ch. 9)

Bonus: More about the Nimbus

In 1967 the broom world was galvanised by the formation of the Nimbus Racing Broom Company. Nothing like the Nimbus 1000 had ever been seen before. Reaching speeds of up to a hundred miles per hour, capable of turning 360 degrees at a fixed point in mid-air, the Nimbus combined the reliability of the old Oakshaft 79 with the easy handling of the best Cleansweeps. The Nimbus immediately became the broom preferred by professional Quidditch teams across Europe, and the subsequent models (1001, 1500, and 1700) have kept the Nimbus Racing Broom Company at the top of the field.

The Nimbus 2000 and 2001 are descendents of those great broomsticks.

I'm updating my answer per the comment below, on how the broomsticks differ.

Long answer: Bewitchments on the broomsticks.

Quidditch Through The Ages (ch. 1, emphasis mine)

There are different charms made for broomsticks, such as a braking charm:

The patented Horton–Keitch braking charm meant that 50 Quidditch players were much less likely to overshoot goals or fly offside, and the Comet now became the broom of preference for many British and Irish teams in consequence.

It seems these enchantments might wear off after age or weaken in some cases:

... the Swiftstick nevertheless has a tendency to lose power in ascent...

Unfortunately, after its initial burst of popularity, the Shooting Star was found to lose speed and height as it aged, and Universal Brooms went out of business in 1978.

... the Twigger has been found to warp under high speeds and has gained the unlucky reputation of being flown by wizards with more Galleons than sense.

This explains the differences in brooms, as the charms used vary in power. Before broomsticks were mass produced, families made their own, so the broomsticks' powers depending on their owner's power:

As wizarding families in those days made their own brooms, there was enormous variation in the speed comfort, and handling of the transport available to them.

As detailed in Quidditch Through the Ages, each new improvement to a broom is updated with various new enchantments, charms, speed improvement, and other features as designed by the broom's creator (in most cases, a company.)

For example, the first brooms were absent of even simple cushioning charms, while modern brooms have sophisticated enchantments, tools, and even warning whistles.

(citation needed from the book)

61
Why does Quidditch allow faster brooms?
6
Why were the Nimbus series Broomsticks the fastest?

38
Who paid for Harry's Nimbus 2000?
6
Why were the Nimbus series Broomsticks the fastest?
7
Does Whitehorn use house elves, hire Witches & Wizards, or employ someother means to make the brooms at Nimbus Racing Broom Company?
6
What's with Nimbus 2000/2001 naming?
14
Do wizards use the same calendar as muggles?
61
Why does Quidditch allow faster brooms?
40
How well are professors paid at Hogwarts?
7
Did the broomstick industry stop research after the Firebolt?