Is Opera the only art form left to the Klingon Culture?

Is Opera the only art form left in Klingon Culture?

Except of course, the art of war (ahem Richard)[that is including martial 'arts'].

In Star Trek VI, we learn that the Klingons enjoy Shakespeare, going so far as to construct a mythos that he was really a Klingon in disguise. This would suggest that plays and spoken-word theatre are widely enjoyed.

In the episode "TNG : Firstborn", Worf and Alexander attend the festival of Kot'baval. There are several art-forms on display

...the festival of Kot'baval is in progress. Although there are signs of modernity, the town square has an ancient, almost medieval feel to it -- it has heavy stone walls, and little storefronts where colorful Klingon wares are sold.

A Klingon street opera is being performed in the town square. TWO KLINGONS are singing and engaging in mockcombat, accompanied by LIVE MUSICIANS who are making a din only a Klingon could love.

WORF : Where have you been?

ALEXANDER : We were watching the fire dancers.

Worf has a number of items of sculpture in his quarters. These may or may not be of Klingon origin: 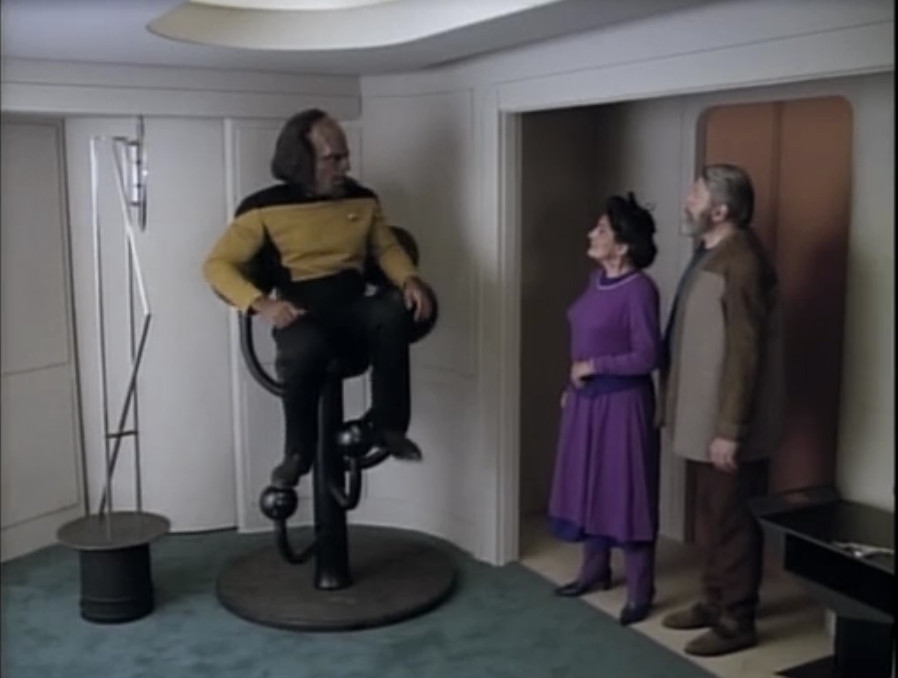 The Klingons practice the art of poetic reading, both for personal enjoyment as well as in their mating rituals. Worf notes in "TNG : Up the Long Ladder"

WORF : It is among the Klingons that love poetry achieves its fullest flower.

and in TNG : The Dauphin:

WORF : No. Men do not roar. Women roar. Then they hurl heavy objects. And claw at you.

WESLEY : What does the man do?

WORF : He reads love poetry. He ducks a lot.

Klingon "popular" music, for lack of a better term (there is no Klingon word referring exclusively to this type of music), is more free-form; indeed, it is characterized by its almost rebellious nature. This is not to say that any specific song may be modified at will. Quite the contrary- the words, melody, and rhythm of any given song change very little over time. For new songs, however, stylistic innovation is both acceptable and commendable. The words to popular songs sometimes follow the same linguistic tradition as Klingon opera and some-times are in the modern language.

Carving and, to a lesser degree, painting also play prominent roles in Klingon society. Statues are found in public spaces, weapons and uniforms are embellished with distinctive decoration, ceremonial implements feature classic patterns. A visitor to the Klingon Empire should have at least passing familiarity with the fundamentals of Klingon art.

One of the most highly developed of the Klingon arts is sculpture. A statue of any kind, realistic or abstract, is a {Hew}.

The part of a weapon with ornamentation, such as the handle of a knife, is usually decorated by means of carving. Even modern weaponry, such as a dis ruptor pistol or disruptor rifle is decorated.

What the Federation would classify as a painting, that is, featuring an image not carved into it but painted onto it is made by applying pigment/dye derived from either an animal or plant source.

Mark Okrand also described using abusive language as an art form, although he may be speaking figuratively :-)

As it turns out, cursing is an art among Klingons. There are many more curses than those three listed in the earlier edition of the dictionary. It is not always clear how to use the curses, but some are certainly epithetical (used for name-calling) , while others seem to have a more general application. A few additional curses are listed below. - Klingon Dictionary (2nd Edition)

The Klingons have a very rich culture (being warlike and cultured is perfectly reasonable, it is a false dichotomy to claim they are contradictory). Not mentioned in the other answers is Klingon poetry, which is at least practiced in their mating rituals:

[Worf makes a prolonged scream.] "That is how the Klingon lures a mate."

"Are you telling me to go yell at Salia?"

"He reads love poetry." [Worf regains his composure.] "He ducks a lot."

In many ways, culture (and by extension, art) is, as with many things, serious business for Klingons.

While art is subjective, there is absolutely no doubt that there are multiple forms of art in Klingon culture. Drama is obviously alive and well in Klingon culture, as emphasised by the numerous references to Shakespeare, and the various holo-plays that Dax and Worf engage in during episodes of DS9.

The Klingon Art of War book talks on the subject of Tapestry making from Targ's Hairs. 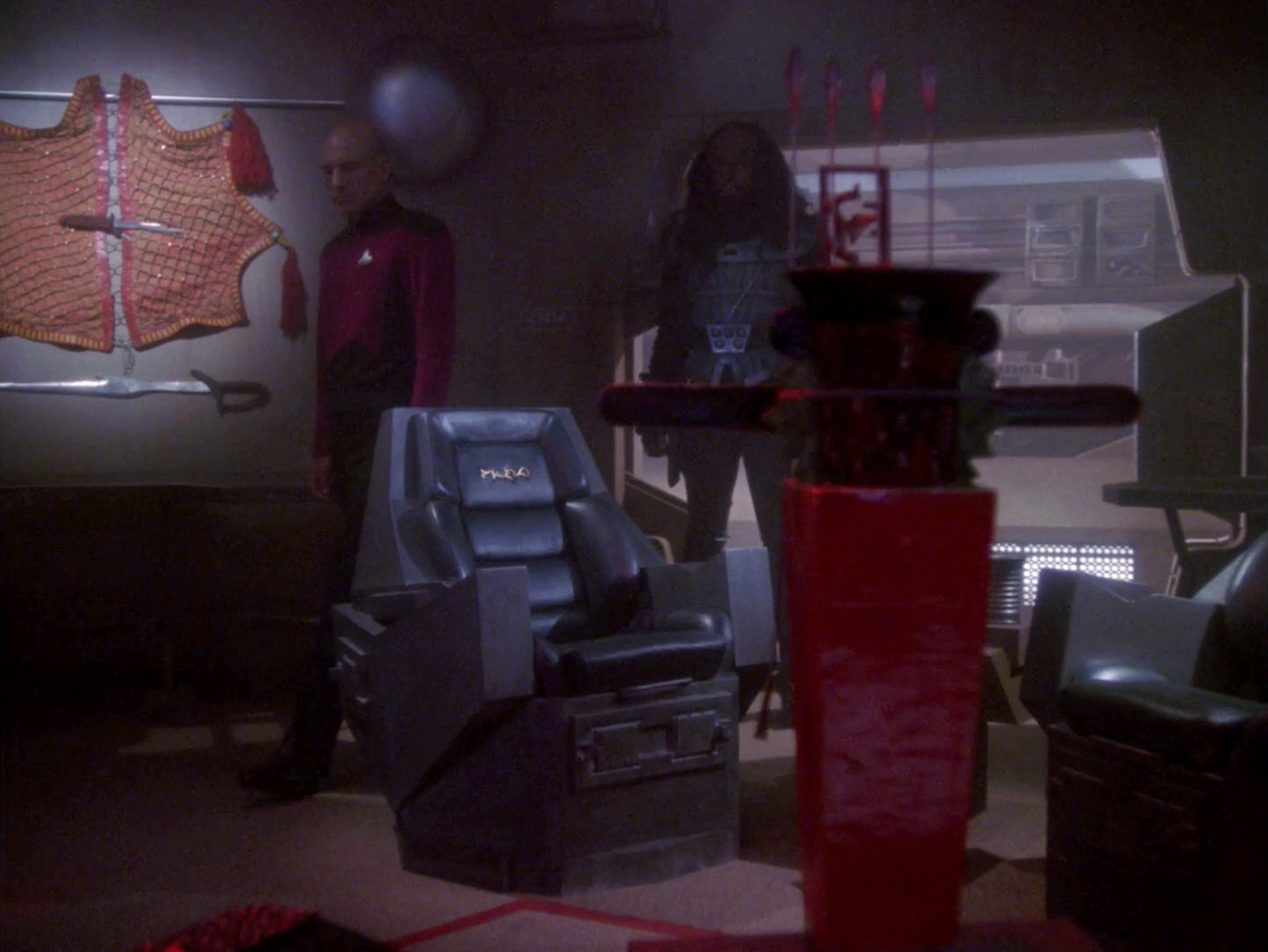 32
Shakespeare “in the original Klingon”?

16
Did Worf not serve in Starfleet before? Why would he dispute Picard's order?
23
Why is Starfleet so poor at security tactics?
10
How did Khan know of the old Klingon proverb?
9
Was Qo'noS evacuated?
6
How did the Klingon war that Sisko refers to spread Starfleet thin?
3
Is there any more Klingon Opera?
7
In what ways does Worf appeal to Jadzia Dax given that she had lots of suitors to choose from?
22
What is the strongest profanity used in a Star Trek show?
7
Why doesn't Lorca want Michael Burnham to go to the Klingon ship?
12
Why didn't Picard let Gowron and Duras's son fight for leadership of the Klingon empire in TNG Redemption?