Fantasy YA Book, Read in the 90's, ballerina with a birthmark, man has always been watching her

I read this book in grade school in the 90's. It's a fantasy young adult book about a teenage girl. She's a ballerina and has a birthmark that signifies something. There is a male that has been watching her since she was born and has something to do with her birthmark. I remember it being a dark somewhat creep/scary book. That's all that I remember about the book. Thanks!

Could it be Amy, Number 7, first book in the replica series? It involves a girl with a birthmark who's being watched by a strange man. She is not a ballerina, but she is a gymnast. Also, according to another question that had this book as an answer, one of the clones is a Russian ballerina (I have not encountered that character, but there is a French ballerina in the second book who seems to be one of the clones). It was published in 1998, which might be a little late for you, but it's a good match overall. 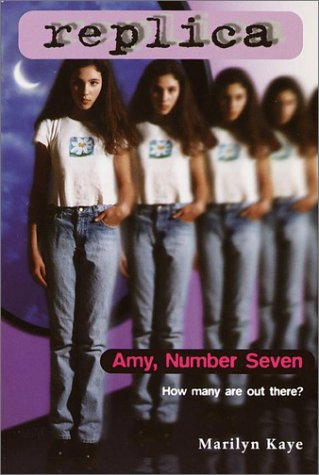 Specially priced! Amy Candler is the perfect 12-year-old girl. She can do anything. She knows everything. But Amy doesn't have all the answers to the mystery of her past. All she knows is that her recurring nightmares seem so real. That her crescent-shaped birthmark wasn't there yesterday. That a strange man is taking photos of her. That her mother is acting weird. That someone is sending her anonymous warnings to keep her talents a secret. Slowly Amy is piecing together her identity, but she'd better hurry.

24
Novel About a Girl Who Realizes She is a Clone

12
70s era YA Fantasy involving evil elves
3
Book about a girl with a birthmark shaped like a wheel who runs away from home
6
Fantasy book, YA, Girl with magical powers & tattoos
6
Young Adult Fantasy book where some people, like the female protagonist with super strength, are called a special name with their special powers
3
Book where the main character falls from a tower in a field of wheat but is unharmed due to her being unconscious
4
Movie where a kid reads a book and enters a fantasy world. School bullies try to steal the book
13
Fantasy/magic book with female protagonist and a misogynistic villain in a ringed city
6
Book about a girl who can shapeshift into various forms, like hyena and squirrel