Star Trek episode referring to reversing the polarity of the Neutron flow?

I want to remind myself how and when the polarity of the Neutron flow is reversed... in Star Trek :-)

That is, I'm asking in which episodes of Star Trek someone does someone suggest they "reverse the polarity of the neutron flow", or some sentence close enough to that one.

(I'm guessing this only happens in TNG but not sure even about that.)

I think you may be confusing Star Trek for Doctor Who. The phrase "reverse the polarity of the Neutron flow" is something of a catchphrase of the Third Doctor...

To the best of my knowledge, a whole lot of things get their polarities reversed in Star Trek (including shields, magnetic constrictors, magnetic probes, etc) but never a neutron flow.

If you're sure it's Star Trek, there is one case of all the "reverse the polarity"s that contains all the pieces, and yet never uses the phrase. The scene it occurs in also popped into my mind upon reading the question, but because the phrase is never used it took a while to find.

In TOS 3x14, That Which Survives the magnetic seal on the fuel flow is ruptured. (A few minutes later, Scotty also refers to it as a "magnetic flow". However, we know from later series that the "fuel" is actually antimatter, which could be neutrons (and yes, antineutrons exist!))

Scotty goes into the "service crawlway" (also known as a Jefferies tube) in order to seal the rupture, during which time Spock performs an analysis on the ship to try and figure out why the ship felt different to Scotty.

The results are that the Enterprise was reassembled by a molecular transporter slightly out-of-phase, and Spock tells Scotty that "reverse polarity should seal the incision".

The specific image that came to mind upon reading the question was this scene: 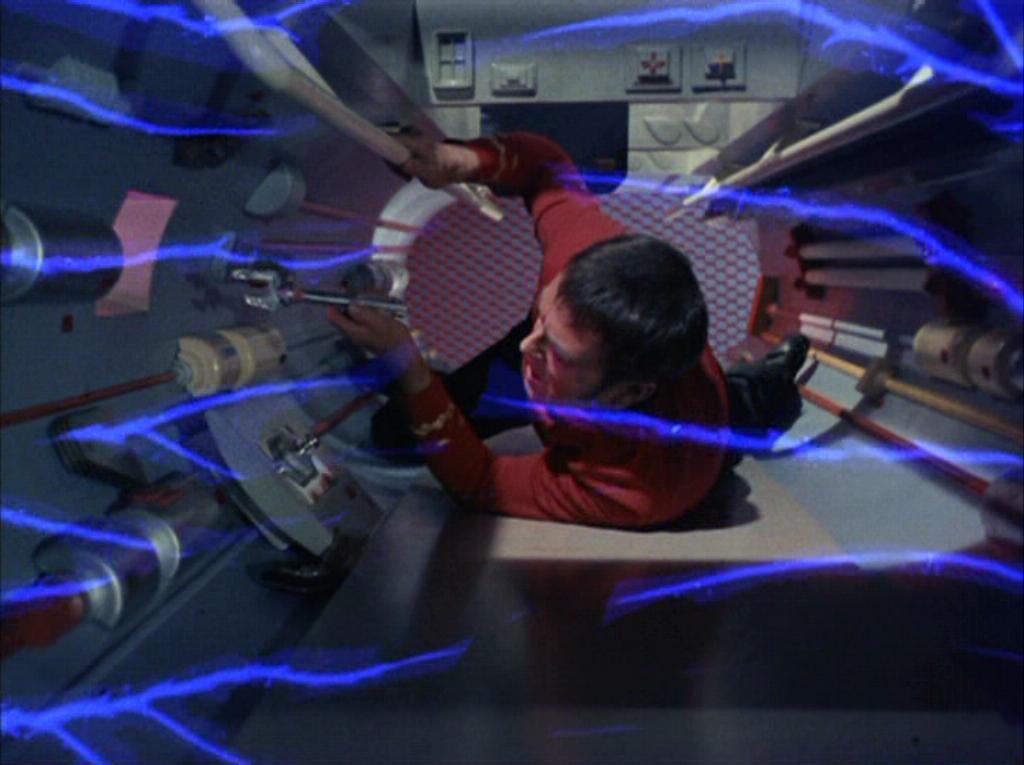 So yes, Scotty reversed the polarity of that tool in order to seal the rupture on the fuel/antimatter/possibly antineutron flow.

There is another case of "reversing the polarity" in TOS: Who Mourns for Adonais. Said before Pertwee ever did!

SULU: Computed and standing by to generate, sir.

Not the answer you're looking for? Browse other questions tagged story-identification star-trek technology or ask your own question.

24
Poker in the Star Trek universe: What are the stakes?
8
Which order should I read the Humble Bundle IDW Star Trek comics in?
8
Which “Star Trek: The Next Generation” episodes should be viewed to catch these major elements?
11
Who tends the plants on Star Trek TNG?
10
What Star Trek episodes take place in the Beta Quadrant?
19
Are there any Star Trek episode that feature only regular/recurring cast and no guest stars?