What and how does Darth Vader see?

Are there any sources that talk about about Darth Vader's visual acuity?

His life-supporting armour is quite advanced but does it provide any useful augmentation to his visual abilities?

The novel Allegiance establishes that Darth Vader's vision is, in several ways, actually worse than a normal human's. Mara Jade describes his visual interface as "having both the benefits and drawbacks of that technology." He is depicted as taking longer than a normal human to adjust to changes in ambient light; in other words, his vision blanks out if someone switches the lights on or off, just as would be the case with modern night-vision goggles.

Mara also acknowledges that this would not be the case with more modern visual interfaces; Vader's General Grievous-type interface is old, and not up to the standard of modern devices. You see a similar issue with the differences between Anakin Skywalker's artificial hand and his son Luke's. The design was meant to preserve his life, not to preserve it comfortably; in Shadows of the Empire, Vader himself mentions that even the act of breathing is extremely painful.

I do not know of any other sources on Vader's visual abilities. I would assume that, unlike a stormtrooper or Mandalorian combat helmet, Vader's helmet does not allow him a full 360 degree view of his surroundings, merely because that ability is never mentioned in any sources on Vader, whereas it is mentioned in multiple sources about Boba Fett and stormtroopers. Similarly, infrared and ultraviolet spectrum vision is never mentioned. For all intents and purposes, it seems that Vader has a fairly slapped-together system, which cannot be upgraded without killing him.

There is a lot of detail about Vader's amor in the Wookieepedia.

It includes the following about the vision:

The eye lens acted as optical filters, allowing for Vader to expand the limits of human vision by detecting infrared and ultraviolet wavelengths, while also blocking out excess light, due to the inability to repair Vader's damaged retinas. In addition, the lens also came equipped with a HUD that supplied critical data automatically as an overlay if Vader entered new environments, including information about atmospheric composition, nearby bio-signatures, and others, which could also be selected via the mouth controls. The lens, likewise, came equipped with secondary eyeshields that activate within 5 milliseconds and automatically sliding over the optical blisters to prevent blindness when approaching intense light. 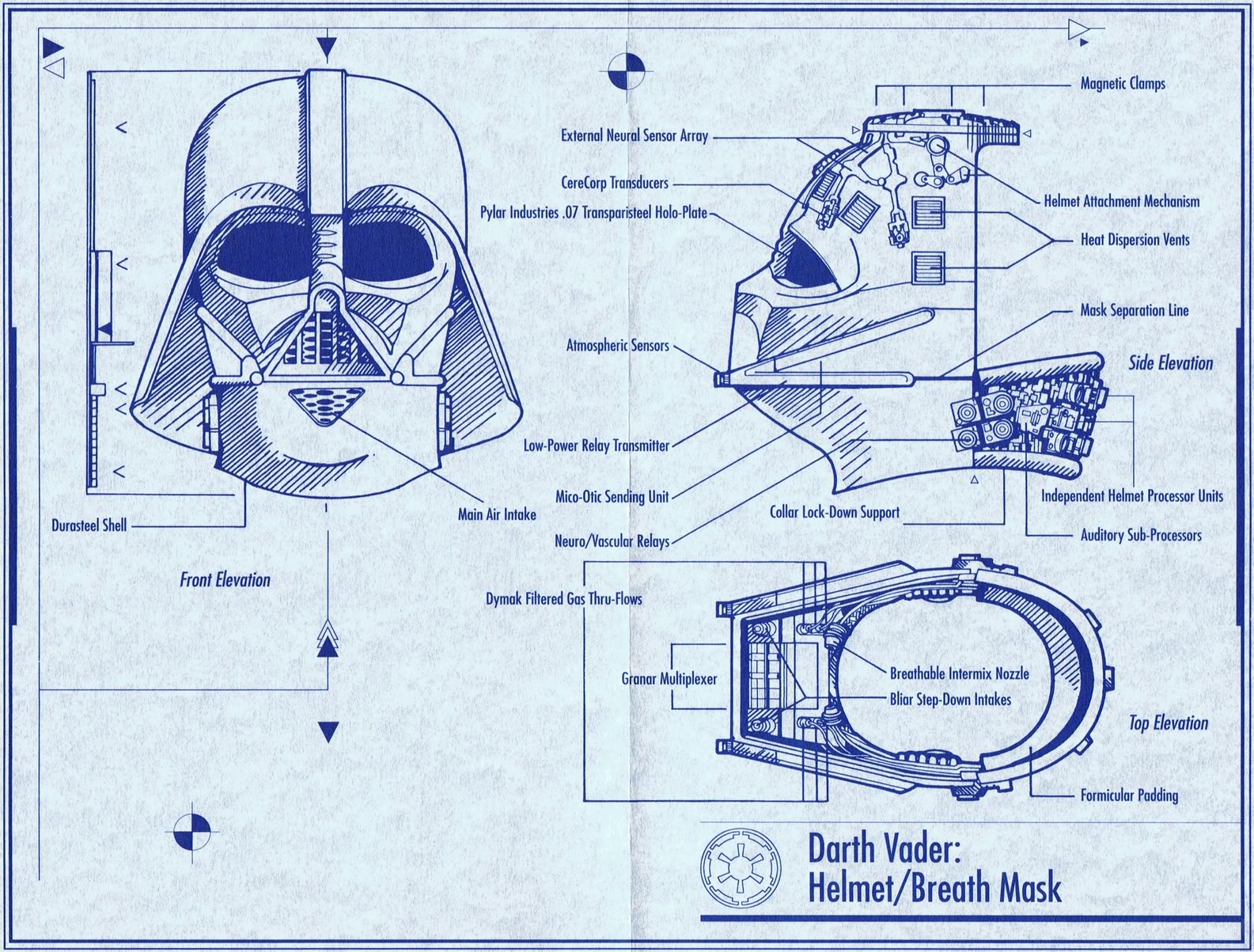 The Lucasfilm licensed sourcebook "Darth Vader : A 3-D Reconstruction" contains a wealth of detail about Darth's suit, transformation and an entire section about his visual capacity.

As you can see from the image below, his retinas were permanently injured. The suit augments his vision while protecting his eyes from excessive light and expanding his ability to view ultra-violet and infra-red wavelengths. There is also a mocked-up version to show how he views the Emperor. 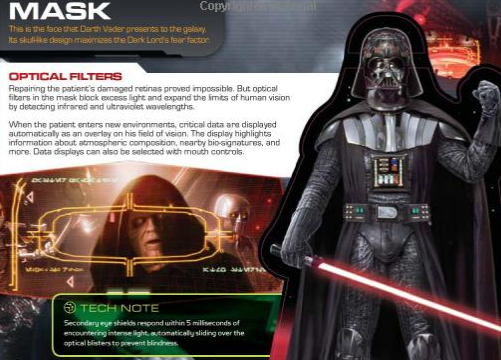 This ties in very nicely with the in-helmet view of his vision that we get at the end of Episode III.

In a role-playing game for starwars, there was an entire force-sensitive race that was blind, but the only thing they could use the force for is see. Darth Vader could do that.

1
Can Vader see the world around him in color?
21
Why did Darth Vader need extra equipment (lenses) to clear his vision?
27
What is the purpose of the blast shield helmet?

30
Why does Darth Vader need to use a targeting grid on his Tie Advanced in ANH?
25
How did the Emperor punish Darth Vader?
40
For how long was Darth Vader alone in space?
9
Did George Lucas base Darth Vader on Lightning from The Fighting Devil Dogs?
4
Were Darth Vader duplicates ever used by the Empire or Rebels?
23
How does Darth Vader eliminate waste from his body?
10
Can Darth Vader "feel" his prosthetics?
6
How did Darth Vader trace the rebel spies to Princess Leia?
44
Has Darth Vader ever worn a different suit than his traditional black one?