In Back to the Future: Part III, we see the grave of Doc. If Doc. Emmet L. Brown is dead and has a grave, then how come he is still alive and kicking in 1885? If he is alive because Marty went back and saved him, then why does the grave exist?

He was dead in the 1955D timeline that we see the tombstone in. After Marty went back to save him, he was no longer buried there in 1955--Marty travels back to about a week before Doc would have otherwise died in 1885. The tombstone itself was already made in 1885 before what was originally Doc's death, just not engraved yet. This is actually a plot point since Marty takes a picture of it and it changes throughout the movie as events change.

Here is the same tombstone, having been altered when Marty is about to get into a lethal gunfight: 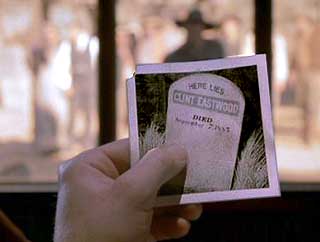 Later, the tombstone breaks in a fight, and vanishes completely from 1955: 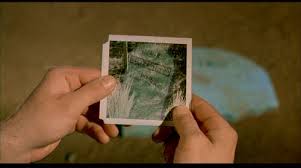 (Edit) This does raise an interesting question--if there is no gravestone in 1955 anymore, why did the Marty in the 1955 of the final timeline go back and rescue Doc, and did the scenes at the beginning of the movie with him and 1955 Doc still "happen"? As far as I know, there is no official answer, and it ends up being kind of a strange reverse grandfather paradox. But as far as the basic storytelling logic goes, the answer is that he died and so there was a grave, then Marty fixed it so he didn't die and there wasn't a grave.

The "rule" that the films follow is that once Marty or Doc make a change in the past to what they perceive as an "already happened" event, or one that they've already see/experienced, they are shunted into a new/parallel timeline based on their actions. They remember the original timeline, and are not acquainted with events in the new one.

So the tombstone is destroyed, and "vanishes" from the photo. But technically, Marty and the photo are moving into a timeline where the tombstone never existed in the future.

Each action they make shunts them into a successively different timeline. If Marty had only traveled back in the first film, destroyed one of Old Man Peybody's pine trees, and come right back, the only change would have been the mall's name.

So technically, there is no grandfather paradox - nothing changes in the original timeline, with the exception of Marty winking out of existence after he hits 88mph.

In the events of the original film, he shunts himself into a timeline where he does not exist in what would be his present. He is an anomaly of the timeline, and begins to be erased slowly. His actions shunt him into another timeline where he does exist, and is restored to potentiality, He only learns later that it is several steps away from his original timeline.

He is alive in 1885 because Marty went back in time to a point in 1885 which was before he got shot.