Why doesn't someone try to turn ON/OFF enemy's lightsaber using the Force?

Lightsabers turn OFF when its wielder drops it or he/she dies. It means there's some kind of pressure button on lightsabers which needs to be always pressed to keep is ON.

In case of lightsaber throw, one uses the Force for that. It means, lightsabers can be turned ON using the Force.

Why doesn't someone try to turn ON enemy's lightsaber to do some lethal damage to someone nearby? Or, has this happened in any canon?

This is (indirectly) covered in the official "Jedi Path : A Manual for Students of the Force"

The lightsaber technique known as Form VI ('Niman' or 'The Moderation Way') uses Force-pushes and Force-pulls during combat. Note that precision use of the Force requires an element of concentration that would probably result in substantial tactical disadvantage.

"To compensate for a relaxed focus on bladework, Form VI encourages integrating Force powers into combat. Two notable moves include Draw Closer, in which a Jedi kinetically pulls an enemy within range of a Saber sweep, and Pushing Slash, in which a Jedi Force-blasts an enemy away after inflicting a cut. Proper management of these tools allows a Form VI master to take control of a group of enemies and eliminate them one by one." 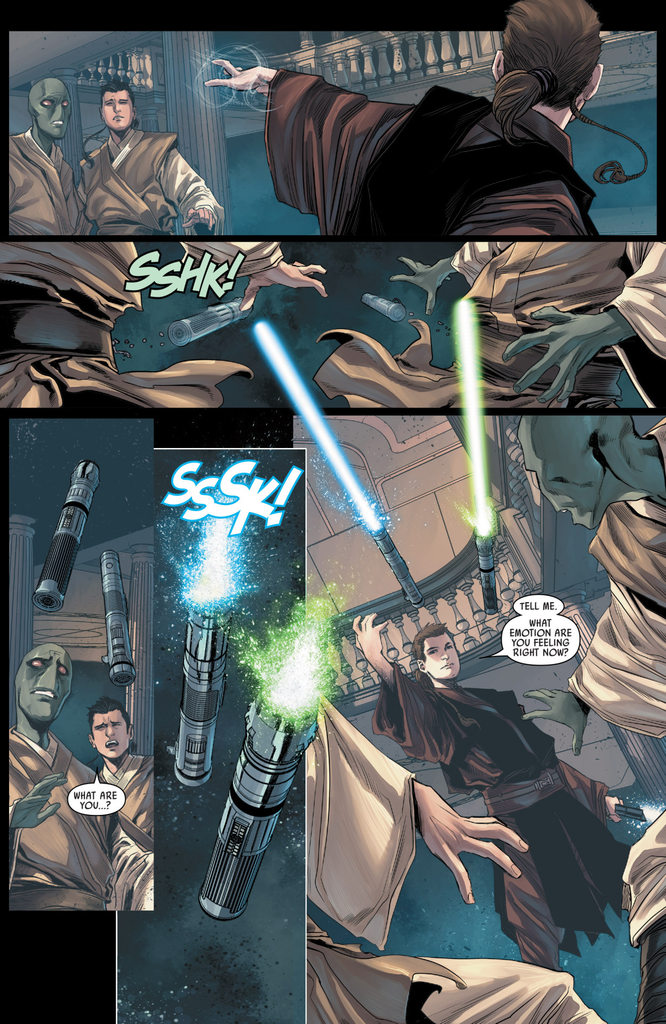 Master Yoda, while training younglings, uses the Force to take his lightsaber out of his pocket and activate it. Credit to @Bpugh

Clearly, Force users can activate lightsaber blades remotely, but this may be limited to particularly strong or skilled individuals.

First, as mentioned by @ManlyMann, the Son shows the ability to turn off several lightsabers with the Force. Of course, he basically is a Force god. Nonetheless, relatively ordinary Jedi may still be able to turn off lightsabers.

For example, in Star Wars: Rebels S02E10 (“The Future of the Force”), Ahsoka Tano fights two Inquisitors, the Seventh Sister and the Fifth Brother. In the course of the battle, she grabs the lightsaber blade of the Seventh Sister. 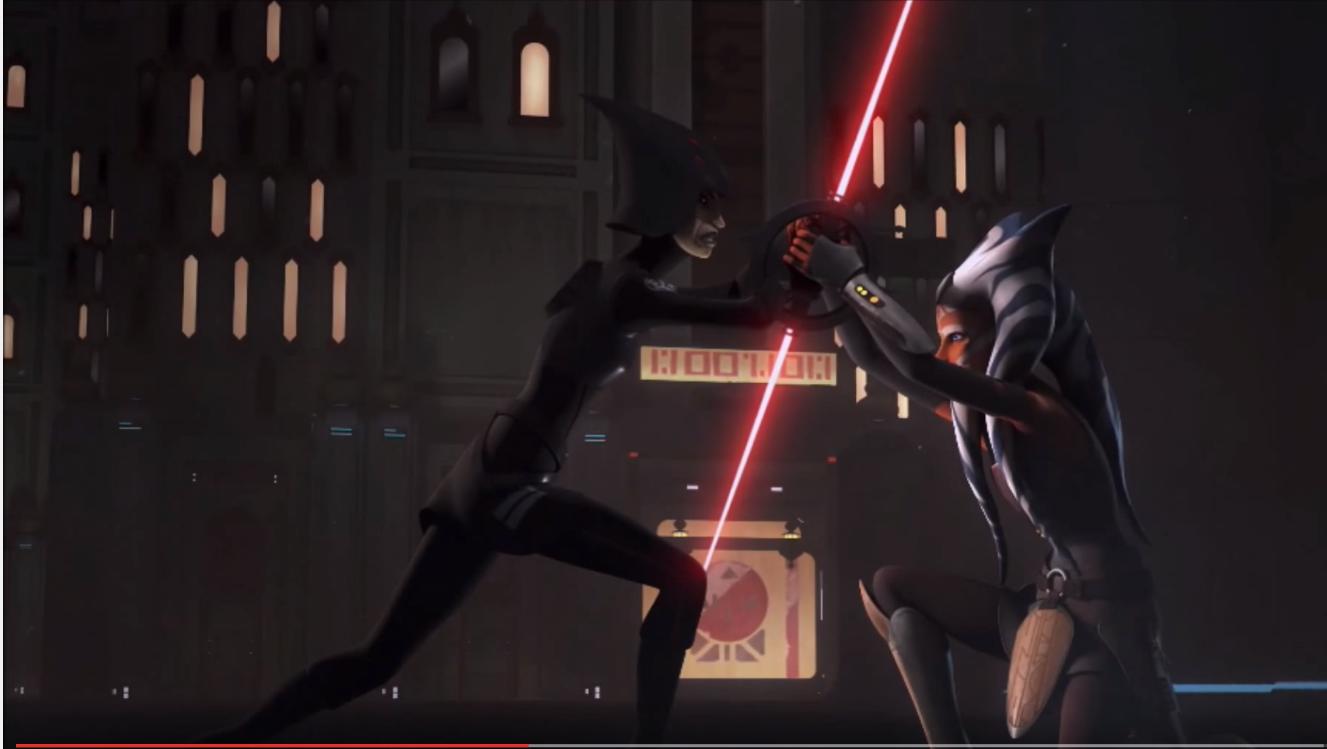 Then she deactivates it: 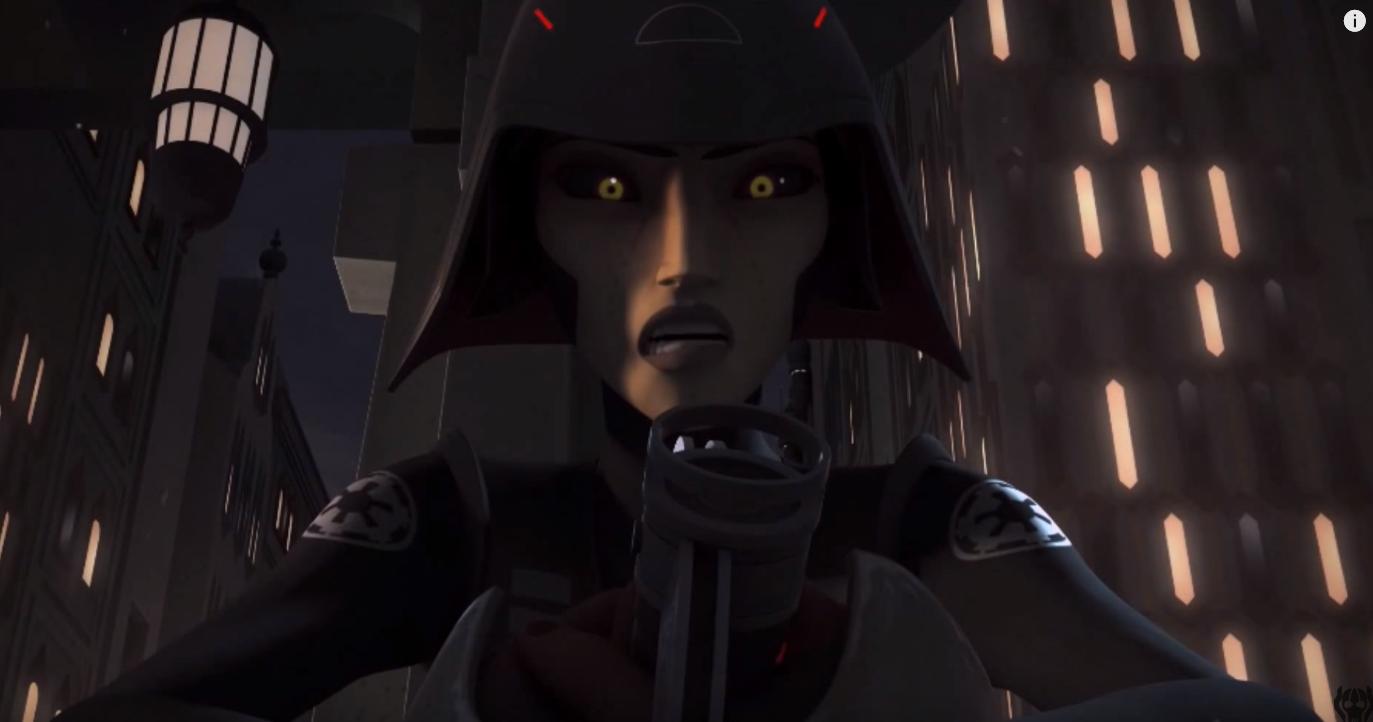 Ahsoka might be using tutamanis to absorb the lightsaber energy (which would be quite an advanced force skill), or simply turning the saber off with the Force, but regardless, it seems likely that she is using the Force to deactivate the lightsaber.

This is bolstered by another instance, in which Ahsoka uses the Force to manipulate an Inquisitor’s lightsaber in a rather similar matter (well, it explodes in his face, but only because she damaged the wrong component):

The creature stepped toward her, close enough for her to touch. His spinning lightsaber held off attacks from the sides, but was vulnerable from the front. Just as she’d reached for her first crystal all those years ago, Ahsoka stretched out a hand.

Sensing her intent at the last moment, the Inquisitor tried to disconnect his weapon and fight her with two blades instead of one, but it was spinning too quickly for him to do it. Ahsoka’s hand landed almost gently on the cylindrical metal, and the Force was with her. The hilt cracked at her touch.

Yoda also uses the Force to deactivate Asajj Ventress’s lightsabers in the very first episode of “The Clone Wars”: 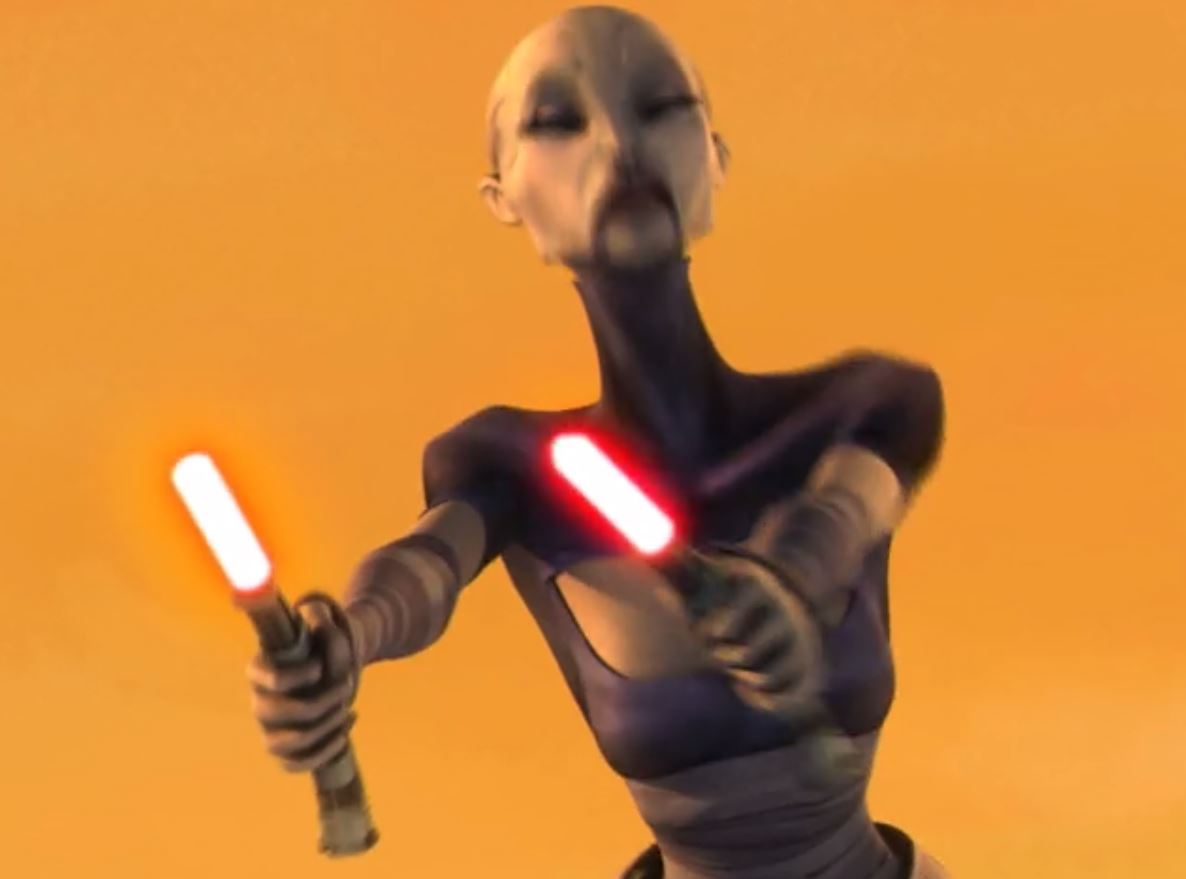 Why don’t we see this more often?

As noted in the other answers, an opponent could probably use the Force to block an attempt to turn their lightsaber off, unless they were dreadfully outclassed. That is exactly what the Inquisitors are in this fight. The Son is basically one-of-a-kind. And don’t forget, Ahsoka was trained by Anakin Skywalker, and is strong in the Force to boot.

Ahsoka consistently demonstrates superior Force skills in Rebels, including jumping over a thrown lightsaber. As such, she may simply be able to overpower the Inquisitor’s attempt to block her from turning off the lightsaber (thus the look of astonishment).

Similarly, Yoda quite outclasses Asajj Ventress, and indeed his ability to turn her lightsabers off is (as with the Son) a demonstration of just how much more skilled he is.

I agree with the previous answers in that it would be difficult, time-consuming and most likely fail. Dividing you concentration enough to focus on switching a button during an intense lightsaber duel would be very risky.

However, similar things has been attempted a few times, by Obi-wan Kenobi, for instance.

In the novelisation of RotS, Kenobi uses the force on both General Grievous' and Vader's mechanical arms in order to release the grip on their lightsaber hilts. Once released, Kenobi uses, for lack of a better word, Force Pull, and grabs the lightsaber for himself.

On Grievous, this works splendidly, while on Vader, it simply makes him furious, causing him to jump across the room and grab Kenobi by arms, almost breaking them.

With this in mind, it would probably not be impossible to flip switches or similar knick-knacks in the midst of a duel, especially not if you are a practitioner of a more defensive ligthsaber form (Kenobi's Soresu, for instance).

That being said, a lightsaber is different from other switches and mechanics.

In Shatterpoint, by Matthew Stover, Master Windu's lightsaber is taken from him, but he still knows exactly where it is (this is used in part as a strategy from his side), because his bond with the saber is so strong. It is, in many ways, more a part of him than much of his body. He can't not feel the location, the slight vibration from the mechanisms and the general aura of his weapon.

I think that it would be theoretically possible and an experienced force-user could probably do it with an opponents blaster or if the opponent wasn't using his or her own saber, for whatever reason, but I do not think it could be done with their own saver: he or she would see (feel) it coming a mile away and prevent it.

1. A quote from the book Shatterpoint, where Mace Windu reflects on his lightsaber, as a means to show the bond between a jedi and his lightsaber:

Because none of them understood what a lightsaber was.

Mace had begun the construction of his lightsaber when he was still a Padawan. On the day he first put hand to metal, he had dreamed that lightsaber for three years already: had imagined it so completely that it existed in his mind, perfect in every detail. Its construction was not creation, but actualization: he took mental reality and made it physical. The thing of metal and gemstone, of particle beam and power cell, was only an expression; his real lightsaber was the one that existed only in the part of the Force Mace called his mind.

A lightsaber was not a weapon. Weapons might be taken, or destroyed. Weapons were unitary entities. Many people even gave them names of their own. Mace would no more give a name to his lightsaber than he would to his hand. He was not the boy who first imagined its shape, forty-one years before; nor was his lightsaber identical to that first image in the dreams of a nine-year-old boy. With each new step in his ever-deepening understanding of the Force and his place in it, he had rebuilt his lightsaber. Remade it. It had grown along with him. His lightsaber reflected all he knew. All he believed. All he was.

2. A quote from the novelisation of RotS, where Kenobi uses the force to open Vader's mechanic hand:

Obi-Wan had only one trick left, one that wouldn't work twice— But it was a very good trick. It had, after all, worked rather splendidly on Grievous... He twitched one finger, reaching through the Force to reverse the polarity of the electrodrivers in Anakin's mechanical hand. Durasteel fingers sprang open, and a lightsaber tumbled free.

We have indeed seen lightsabers turned off with the use of the force, this comes directly from the Star Wars the Clone Wars series where in S03E15-17 Anakin, Obi-Wan, and Ashoka, travel to Mortis. There they meet the three very powerful force users, who all show abilities to shut down the Jedi's lightsabers. Obi-wan also accuses the Son of being a sith after he shuts down their lightsabers meaning this technique requires a lot of force strength or is a dark side technique. The Father also shows this ability later on. Although we haven't really seen lightsabers turned on by the force, there is evidence to support that it can happen, such as the idea of throwing sabers. 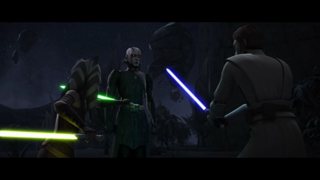 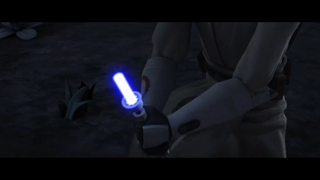 Because it would be difficult, time-consuming, and probably wouldn't work. As Richard said, it isn't a good idea to drop your guard to push a button on someone's lightsaber in the heat of battle. Even if it were, while you're doing that, the person you're fighting can simply use the Force to block your attempt.

Also, you are completely mistaken about using the Force to keep a lightsaber switched on when throwing it. Luke Skywalker makes more than one mention of "locking" his lightsaber before throwing it in the EU. He even mentions this in Vision of the Future, where throwing the lightsaber wasn't involved.

8
Why didn't Kenobi turn Grievous Lightsabers off?
3
Has anyone ever used the Force to deactivate an opponent's lightsaber during combat?
31
Why did Anakin turn to the Dark Side?

69
Why does a lightsaber turn off when a Jedi dies or drops it?
27
Does construction of a Lightsaber require use of the Force?
18
Could several Jedi peacefully overpower one Sith opponent through nonviolent Force techniques?
17
How is Kylo Ren's lightsaber able to have a cross at the hilt?
27
Can droids be shut down manually?
7
How does a lightsaber behave in a confined space?