Why did Remy (the rat from Ratatouille) cook Ratatouille at the end of the movie?

Why did Remy (the rat from Ratatouille) cook Ratatouille for the critic at the end of the movie?

He couldn't have possibly known that the food critic had an emotional connection with the dish itself?

It just seems so random for Remy, and so coincidental for the food critic.

The ratatouille is a traditional French dish. It is safe to assume that the critic had had it when he was a kid (like a paella if you are Spanish, apple pie for an American kid, tagliatelle alla bolognese for an Italian... and my list of cliché dishes goes on and on).

The Epic Win for Remy is to offer the critic a dish that is popular in their cuisine (thus, odds are that the critic guy had had that before), do it offering something new (those instructions about cutting ingredients and preparing the plate in a different way) and fancy (fancy enough to be successful and interesting for the menu of the restaurant) and yet, get a flavor that triggers an emotional reaction in the critic, thus making him enjoy food, something he had long forgotten. 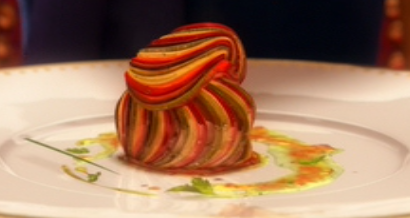 Remy's version of the dish is actually called confit byaldi.

Integrity is a central premise of Ratatouille. All of the "bad" characters use cooking as a means to deceive and all of the "good" characters use food as an expression of their personal integrity. The major plot-line revolves around the tension between integrity and easy but undeserved success.

Given this theme, we can see that Remy offers the critic a dish made with integrity. It is simple food, simply prepared, but with the uncompromising attention of one who genuinely cares about the food and the person eating it.

When Ego tastes the dish, the integrity recalls his experience of his mother's expression of love through food. He is reminded of the true power of food and he realizes how jaded he has become.

Not the answer you're looking for? Browse other questions tagged pixar ratatouille or ask your own question.

50
Why did Darth Vader torture Han Solo in Cloud City?
9
How did Bilbo Baggins find the One Ring exactly?

69
Why were the “Monsters, Inc.” monsters told that touching kids would kill them?
9
Why wouldn't a scream alert the child's parents, if crying can?
18
Do Andy and Riley live in the same world?
21
Why are The Incredibles villains technologically-based?
22
In Toy Story, are toys the only inanimate objects that become alive? And if so, why?