What evidence is there supporting an alternative parentage for Jon Snow?

I've heard speculation that Jon Snow's actual parents may be Rhaegar and Lyanna Stark, but in reading the books I'm not sure what evidence could be used to support this conclusion. I thought there might have been something in the conversation Davos had before being smuggled into White Harbor, but I couldn't stretch anything that far.

What evidence do proponents of this theory cite? Does any of it involve stuff in the texts or just sweeping generalizations of the characters' personalities (e.g. "Ned Stark is too honorable to father a bastard").

Like the previous answer stated, its a very big and expansive issue. But I'll list a few highlights:

Reasons to doubt that Eddard is Jon's father:

Reasons to affirm that Eddard is Jon's father:

Reasons that imply Jon is a Targaryen-Stark:

That's all I can remember at the moment. But I'm sure there are more.

I'm surprised no one mentioned the scene that ends with Ned resigning his position of Hand of the King, because that was the moment that finally gave it away for me.

When I first read it, I figured it to be Ned only being who is he, a very honourable man, refusing to take part in such heinous acts. On rereading it, it came to me that Ned protested too vehemently, that it was personal to him. And when Robert said he would kill all the "Dragonspawn" that he could find, everything came together.

Ned was not just protecting Daenerys, who he does not even know, he was protecting Lyanna's son. Promise me, Ned.

Read the passage, you will see it too.

Also, as mentioned, Ned is a very controlled, very strictly honourable man. It is hard to imagine him fathering a bastard. It is however easy to imagine him sacrificing his own honour to protect someone else. Much like Robb did when he married Jeyne Westerling.

This question is the subject of endless discussions here, and IMHO it is way too big to be answered here. There are many subtle hints and clues that are being interpreted to support this theory. The timing of Jon's birth, Lyanna's saying "Promise me, Ned..." before she died, the fact that Ned never really talks about Jon's mother, the various prophecies about the dragon having 3 heads, about the prince that was promised, Raegar's obsession with those prophecies, etc., etc., etc.

And yes, Ned is way too honorable to father a bastard. He is honorable to the point of being utterly stupid. While there are several theories about who Jon's parents really are (Raegar and Lyanna, Brandon Stark and Ashara Dane), I think there is a prevailing opinion that Ned is not his father.

The point is, we'll never know for sure, until George Martin tells us. But it is fun to speculate about it nevertheless. Please see the forums on westeros.org for details.

I think it is worth noting that when Sam told Jon of his intention to claim Gilly's son as his own so that he may be fostered at Horn Hill, he asked Jon if there was honor in that lie. Jon replied that there was. I can easily imagine that this was meant to parallel similar circumstances that may surround Jon's parentage. Ned may have told an honorable lie as well when he claimed Jon as his bastard.

Just after season six finished, HBO released this infographic, showing the various links between characters. There are two black lines, indicating parentage, leading from Jon Snow's icon. We now know for certain that Jon Snow's parents are Lyanna Stark, sister of Ned, and Prince Rhaegar Targaryen. This confirms the long-held R+L=J theory, as well as making Jon Snow the nephew of Daenerys, since Rhaegar was her older brother. 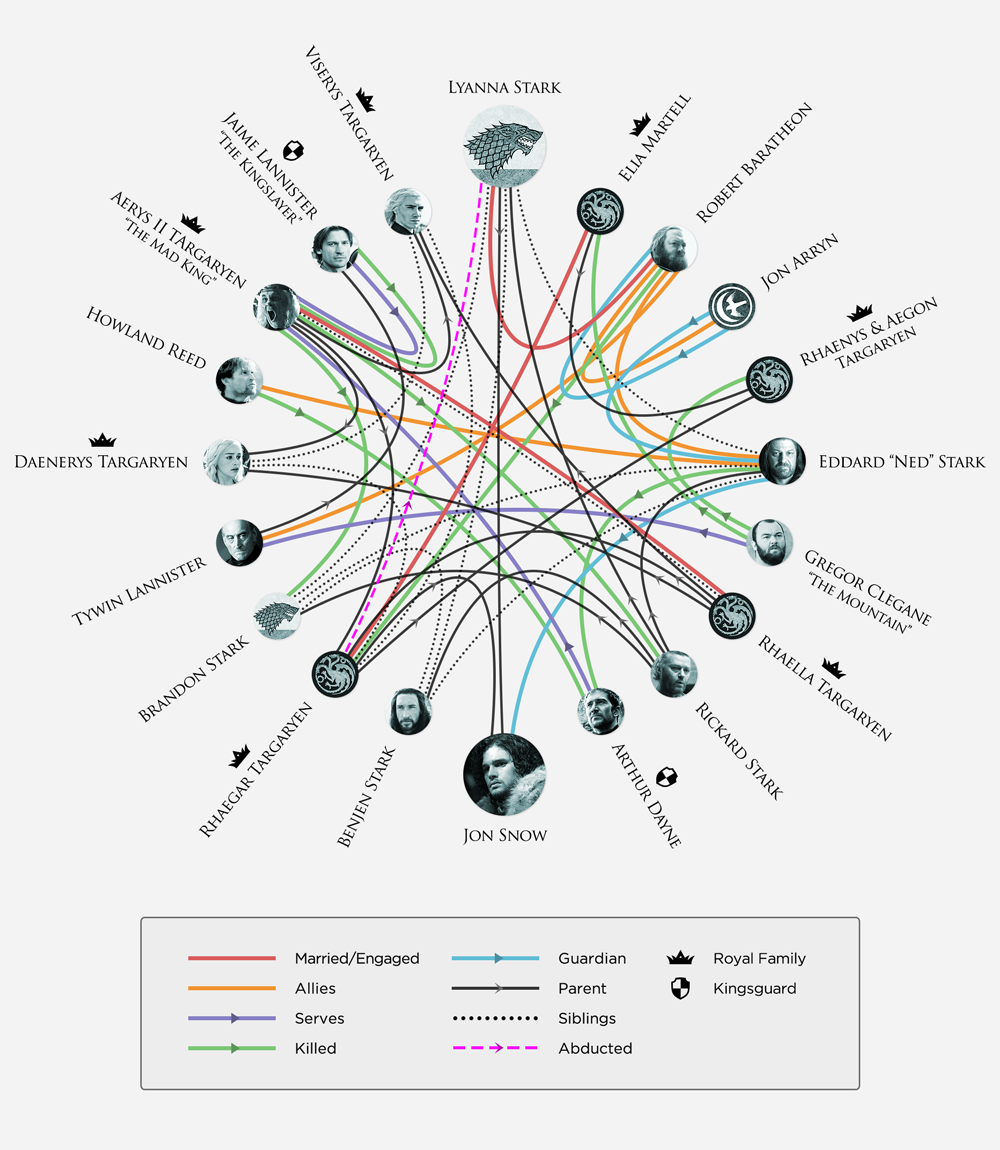 Well, after reading the other answers it be became clear to me that Jon Snow was Lyanna and Rhaegar's son. Nonetheless some things are missing to Snow to make him Rhaegar's son (he fears the fire, he does not look like Rhaegar...)

However, in the first chapter of Davis in ADWD Lord Godric says :

At the dawn of Robert' rebellion. The mad King had sent to the Eyrie for Stark' head [...] The fisherman drowned, but his daughter got Stark to the Sisters before the boat went down. They say he left her with a bag of silver and a bastard in her belly.Jon Snow he was called [...].

It may be just a tale or a lie, but I still wanted to add to this.

Regarding Jon being a Targaryen, but not having the look remember when Aemon is talking about the prophecy:

"that the prince is born of blood and fire?"

Well, we all know what happens at the end of Book 5, that's the blood part. And if he is dead and is brought back by Melisandre then that's the fire part and when Jon comes back he will have been born of blood and fire. After this its likely that his appearance will be effected...so he may look more Targaryen, yet...

An alternate parentage is quite likely. Jon as Ice (snow) and Daenerys as Fire (dragonfire). This is possibly the main thrust of the narrative. I also don't see Ned allowing his wife to treat Jon as he does if Jon is his son (though a caring uncle might let that conflict slide). If he's a Targaryen, he'd be even more conflicted.

Daenerys wasn't just told she wouldn't get her Sun and Stars back. She was given a prophecy instead. When the sun rises in the west, etc, she would be able to have a living child again. Lloyd Alexander's series has a similar prophecy "a river of fire" and "night turns to day". Seen as a prophecy for the next time Daenerys will love (Jon Snow), some big and crazy things need to happen but that's what you'd expect at the climax of a story this big. Them ruling as a Song of Ice and Fire would cement the story and give us all both southron humbling and the complete end of House Baratheon of Kings Landing (sic) AKA our ever unpopular Lannister rulers, and the reelevation of Stark to Warden of the North.

Jon Snow cannot be the son of Rhaegar Targaryen. If he were Rhaegar Targaryen son he would have "blood of the Dragon" and fire would not burn him. Yet in his fight with the one of the White Walkers deadmen he is burned badly by the fire he uses to kill it.

Any other thoughts on why he was affected by fire while Dany was unaffected by the Pyre?

Not the answer you're looking for? Browse other questions tagged a-song-of-ice-and-fire jon-snow or ask your own question.

8
Are Rhaegar Targaryen and Lyanna Stark the parents of Jon Snow?
-5
Why does everybody think Jon Snow is this character's son?
3
What are counterarguments to R+L=J?
29
Who knows the truth about Jon Snow's parentage (father & mother)
15
What is the end of A Dance With Dragons meant to convey about the fate of this character?
22
Is the Red Woman confusing Stannis for Daenerys?
9
Did Aemon Targaryen know who were the true parents of Jon Snow?
-5
Why did Ned Stark never tell the truth about his son?
1
Why does no one in Westeros question Jon Snow's parentage?
1
When was R+L=J first publicly mentioned?
See more linked questions

27
Why did Ser Gregor kill Ser Hugh?
15
Why couldn't Jon Snow pull out Longclaw?
20
Why was Jon Snow so ignorant?
14
Why did Melisandre want Jon Snow?
16
What does "You know nothing, Jon Snow" mean?
25
Is there any evidence Jon was legitimized?
4
Why didn't Jon Snow ask for help?
17
What coat of arms does Jon Snow use?