Why don't zombies eat each other? [closed]

Ask Question
Asked 10 years, 2 months ago
Active 6 years, 3 months ago
Viewed 33k times
43
It's difficult to tell what is being asked here. This question is ambiguous, vague, incomplete, overly broad, or rhetorical and cannot be reasonably answered in its current form. For help clarifying this question so that it can be reopened, visit the help center.
Closed 9 years ago.

In most zombie movies the undead only go after humans who are alive. Why is that?

This applies also to the 'Infected' like the ones from the movie, '28 Days Later' and 'Dawn of the Dead' which, in my opinion I don't think are technically dead.

What prevents zombies from attacking each other?

In Marvel Zombies, they did once they'd exhausted their other food supplies.

But they complained the whole time - apparently the dead taste terrible, no matter how well you cook 'em.

In other mythologies, it varies. In 'Return of the Living Dead' they eat braaaaaaaaains...and zombies don't have those (they need the electrical impulses of the living brain to dull the pain of being dead).

In the other 'Dead' movies (Romero's) they seek living flesh. If it isn't warm, they leave it be.

In Monster Island (and the sequels) the dead seek the energy of the living, which (most) take via consumption - the dark energies that fill the dead don't heal (or benefit) other zombies (unless they retained their intellect).

In short, it's a conceit of the genre, and each author gives it his own spin (or doesn't - some just don't address it).

There are several angles to tackle this from.

Thinking about it, I guess it was never made perfectly clear in the 28 Days movies. I could definitely see those guys tearing each other apart. But I think in general, the idea is that the zombies are able to distinguish their prey (us) from other zombies in some way.

Turning into a zombie changes the perception of the creature. They often act as if they aren't aware of each other. Even when they are swarming, you see zombies climbing over each other, trying to reach the living. They are not working together, so much as they are all after the same objective.

The change in perception could make them see other zombies as allies (or harmless / non food things) as opposed to the living, which are food. In I Am Legend (the novel, which influenced and popularized the concept of zombie apocalypse) the infected saw un-infected as monsters / food, and saw each other as normal.

From Wikipedia I Am Legend Novel

..but fear and hate Neville, who has destroyed some of their people along with the [dead bodies animated by the germ], during his daytime excursions against the latter. 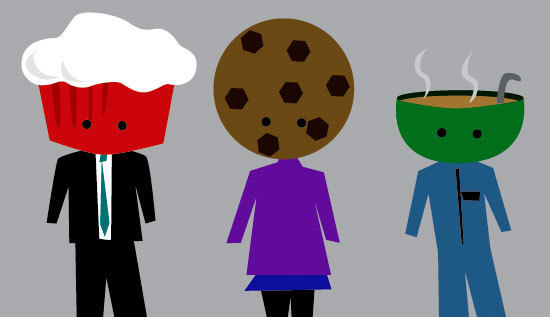 Personally, I was making a lot of progress in my weight loss over the past week, ever since that big biohazard emergency. I guess the mandatory quarantine has helped keep out distractions so I could really focus. The weight has literally been falling off of me, like in actual chunks of flesh, which is a little weird, but I guess that makes sense, how else would fat people get thinner?

The only problem is that lately I just keep running into really delicious looking people, just really pink and fleshy, with brains that just melt in your mouth. They have to be like, a million calories. I guess I just need to start avoiding bunkers and fortified buildings entirely, since they're always chock full of tempting, tasty-looking people.

Zombification is an infectious disease. It spreads by biting the uninfected. It's whatever makes the zombies what they are (virus, curse) that incites them to eat fresh brains: so that it can spread.

To add credence to that theory, zombies are a staple of horror stories, which use our fears to entertain us. The fear of disease is deeply seated in the collective psyche, and the knowledge that infected "humans" are contagious probably dates back several millenia. There's nothing really scary about sick people trying to infect each other. There is however something scary about the sick infecting the healthy, who in turn will infect others.

In The Walking Dead, the zombies voraciously consume anything living that they can find, and since they never stop eating, it poses the question: why do zombies keep eating? Eternal hunger? Or random compulsion?

It seems like they always keep eating, even when they've gotten fat from it. Like in season 2 episode 1, "What Lies Ahead" (the last one they find walking in the woods) keep watching you'll see it near the end.

Zombies seem to "eat" the living mainly to gain "life energy". Being dead, zombies don't themselves have any, so are no viable food source for each other (except maybe right after feeding).
Of course the exact mechanism differs between movies/stories, in some they do turn on each other eventually for lack of other sources of sustenance, in many others it never gets to that point before they're all destroyed.

It is unknown whether or not consumed meat is digested in some way or simply continues to rot within the stomach (both explanations could explain the lack of tissue remains of the ground squirrel eaten by a walker in the forest of the TV series). If the meat is digested however, and serves in some way as fuel, it could explain how some walkers have not yet rotted while others have decomposed to the point of immobilization. - The walking dead wiki

The text says it all.

Why don't humans eat rotting animal flesh? It tastes terrible as carnivores the sweetest meat is that which has been freshly slain. Call it life force or not, at the end of the day it's delicious...which is why zombies prefer live prey.

Well the unread version probably don't eat each other out of consequence. There's no real need to. But a rage virus and you don't tear apart the guy who just infected you. Doesn't. Make any sense.

In the Sluggy Freelance world, zombi-ism is a curse which allows them to replenish what they have lost by eating the flesh of living creatures. Specifically, the must eat what they wish to replenish: muscle replenishes muscle, bone replenishes bone, and brains replenishes brains. If they fail to eat brains, over time theirs will rot, reducing them to drooling idiots. So, in that world, eating another zombie would not allow them to replenish themselves.

In Resident evil video games, you can see zombies been eaten each other, however looks like the live people have better taste .

In Resident evil book's explain that the virus who make zombies just retain their basic instincts, and become more agresive, actually they eat all they can put in his mouth.

Not the answer you're looking for? Browse other questions tagged zombie or ask your own question.

23
What Happens to Zombies that Don't Eat?
14
What constitutes "true" undead?
13
Are there actual Zombie Rules?
18
Why don't people in zombie movies ever know what zombies are?
12
Human Bites Zombie: What Happens?
-3
Would survival in a zombie apocalypse be easier in a colder climate?

32
Aren't zombie outbreaks self defeating?
1
Where do zombies come from?
2
Where does the concept of infected people turning into zombies only after death originate from?
4
Has George Romero ever revealed where he got the idea for his zombies?
10
When did zombies become "infected" rather than corpses raised from hell?