How can a Stargate draw power from a black hole?

In "Beachhead" (SG-1 season 9), Col. Carter notes that the only thing in the Universe powerful enough to power an Ori Supergate is a black hole, and indeed the Ori manage to collapse an entire planet in order to create one (the gate's completion was thwarted, however).

In a later episode, Camelot, they succeed in deploying a Supergate near another artificially-created singularity, allowing an Ori fleet to enter our galaxy. 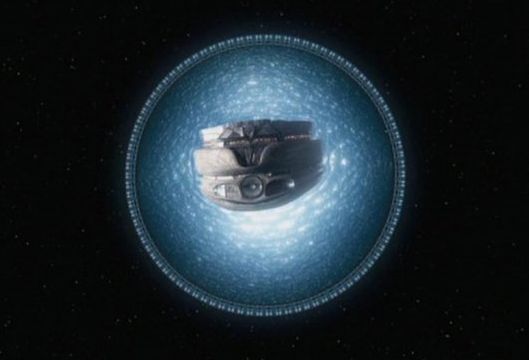 My question is, how can a Stargate harness energy from a black hole?

In the Season 2 episode called "A Matter of Time" an SG team off-world tries to dial home (Earth) and eventually does succeed causing a big problem.

SPOILER According to in-universe physics, a stable wormhole can only be sustained for 38 minutes without additional power. The gates in the Milky Way and gates developed after the ancients left are able to draw power from any near-by power source, as they are able to use lightning to power the Stargate in Season 1's "Torment of Tantalus". In "A matter of Time" the returning team is trying to escape a black hole that is slowly pulling in the planet they are on, since the stargate on that planet is already being pulled into the black hole it's able to draw power from the gravitational forces that are destroying it and remain open indefinitely.

See the wikipedia article on the wormhole: http://en.wikipedia.org/wiki/Stargate_(device)#The_Wormhole

Back to your question. With the above description we can assume that the Ori opened the gate in their galaxy very close to a black hole and it will be sucked in eventually. This also implies that the Ori's ships have engines powerful enough for them to break away from the forces of a black hole.

Stargates work by creating and sustaining a wormhole; it seems that this latter task requires more and more energy as the wormhole ages and destabilizes, till this 38 minutes when the energy required by this task exceeds gate's supply and wormhole spontaneously deteriorates.

Now, the role of the black hole is not in delivering power to the gate but in stabilizing the wormhole so that the gate does not need to do it.

Black holes are perhaps the most efficient bulk matter to energy conversion mechanisms that exist. Solar Fusion converts about 0.7% of matter into energy. A supernova will convert about 10% of it's mass into energy, but this is mostly in the form of neutrinos which are not very useful and is kind of a one shot deal.

Antimatter/matter annihilation is pretty good, but you have to start out with half your mass as antimatter and still lose about half to neutrinos.

A black hole, depending on how you use it, can convert 100% of any form of matter into energy. One method is via hawking radiation, a black hole will eventually radiate all its mass-energy as thermal black body radiation, you would have to have a small black hole though and carefully control its size and matter intake. A lot of tricky engineering.

However, the best method is quite simple and will work with any black hole, harvest energy from the accretion disc, as matter swirls into the black hole, it gets hot. very hot, hot enough to release the binding energy of atomic nuclei, effectively fissioning everything into a stream of quarks, kaons and whatnot. This process can radiate as much as 40% of the rest mass energy equivalent of whatever you throw in as energy.

to quote the wiki

This process of accretion is one of the most efficient energy-producing processes known; up to 40% of the rest mass of the accreted material can be emitted in radiation.

More details on how the energy is released and derivation of the above amounts is in this paper. Not for the physics adverse. http://arxiv.org/pdf/astro-ph/0306213v4.pdf

Not the answer you're looking for? Browse other questions tagged stargate stargate-sg1 energy or ask your own question.

5
What Methods Are Used to Generate and Transfer Power to the Stargate?

35
How does the Stargate Wormhole know whether it can close itself, or if there are more people coming through?
16
What was missing that kept Stargate Command from making their own Stargates?
4
How much correction can a stargate perform?
15
How can the Stargate symbols represent constellations?
20
How does the stargate ramp survive the unstable wormhole?
6
If the Goa'uld exile you on an unknown planet with a Stargate, can you escape?
4
How does Destiny in Stargate Universe Store its Energy?